END_OF_DOCUMENT_TOKEN_TO_BE_REPLACED

Let's say that – rather than actually ending a two-decade deflation – the price of clothing to Western consumers is only now set to turn lower.

Let's agree that the doubling of central-bank foreign reserves since 2005...plus the worst sub-zero real rates of interest since the mid-70s...will count for nothing in global energy or food prices.

Let's also say, despite all experience since the credit crunch bit in 2007, that the "output gap" theory – those "low rates of resource utilization" as the Fed put it on Wednesday – finally comes good, and so excess capacity conspires with slack demand to pull costs lower.

Let's imagine, in short, that money actually starts to gain value. What then? 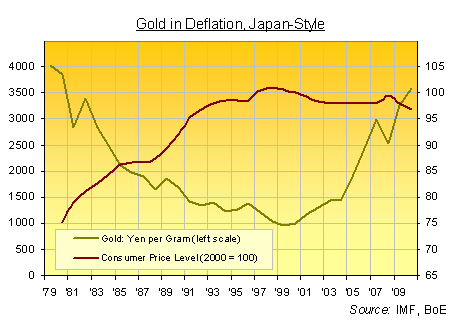 Back in 2002, three years after Japanese consumer prices began falling and one year after the Bank of Japan first embarked on quantitative easing to try and reverse that trend, Tokyo's Economic & Industrial Policy Bureau organized a survey of consumer experiences. (A big thank-you to Atsuko Whitehouse of Bullion-Vault-Japan for this research, by the way...)

All told, 80% of respondents in 2002 said they felt some level of deflation in prices. A little over 25% felt deflation "very strongly", in fact. And only 1% said there had there been no deflation in their experience.

Yet Gold Prices in both the Tocom futures market and in Tokyo's Ginza shopping district had risen 37% regardless. That gave early buyers of the ultimate (and apparently one-trick) "inflation hedge" a better than 40% gain in real terms.

Sure, the price of gold globally had also been rising. And Japan's gold-friendly deflation came as the Yen fell on the forex market, extending the Dollar-price rise by 16% for Japanese buyers. But throughout its long, soft depression – and until 2009 – Japan was the world's second-largest economy, with the world's second-largest stock market. Thanks to Tokyo's swollen government spending since consumer prices peaked in 1998, it's since gone from the second-largest to No.1 bond market, too.

So we shouldn't dismiss Japan's experience as a mere footnote or outlier. It certainly suffered deflation in domestic risk-asset prices and credit supplies too, if not in the actual volume of money supplied to the economy. (As in the US and UK, base money grew fat and squatted on bank balance-sheets thanks to quantitative easing; it failed to pile new debt on top of the then-record total.) While government bonds rose in price, yielding just-about real returns thanks to those gently slipping consumer prices, the Nikkei index of stocks fell by more than a quarter. Real estate, having already lost one fifth over the previous decade nationally – and after more than halving in the 6 biggest cities – lost another fifth again.

The only major economy to hit deflation since before the Second World War, Japan thus offers our only template for what a modern deflation might look and smell like. Hence its obsessive hold on central-bank chiefs and would-be policy-makers (Ben Bernanke at the Fed, Adam Posen at the Bank of England, Paul Krugman everywhere). Hence BullionVault's quick survey of Japan's investment landscape since 1998. Because it looks remarkably like the ground opening up before US and UK investors tonight.

"Domestic uncertainties spur Japanese investment," the World Gold Council's quarterly Gold Demand Trends reported at the close of 2001. Physical gold demand from private Japanese citizens then rose another 24% in 2002, swelling again in 2003 only to rise by 26% by physical volume in 2004.

That year, and for the second time since 2002, the Bank of Japan announced a cut in its ceiling for bank-deposit cover (equivalent to the FDIC), capping insurance at ¥10 million ($90,000). That really meant something, as the WGC noted, in a nation of "occasional bank failures" where "56% of household investments are held in bank accounts." And spooked by the fear of a truly deflationary uninsured bank failure, retail Gold Investment demand surged by 42% in tonnage terms in 2004, rising by nearly 50% by Yen value from 2003 to ¥103 billion ($1bn at the time). And right alongside, four years of ZIRP had forced a far greater quantity of Japan's famous cash-savings to seek better-than-zip elsewhere as well.

The initial period of Japanese deflation – marked by sinking interest rates and gently falling consumer prices – brought a series of mis-selling scandals in high-yield foreign bonds. Well, they were only scandals after Russia and then Argentina defaulted, of course. No-one much minded when they were paying (and the lesson went unlearned too, of course). Average daily volumes in the Tokyo foreign exchange market meantime rose 18% between 2003 and 2006 according to Bank of Japan data, but the Watanabes didn't really get hooked until the finance industry spotted the trend, and created retail-friendly products for leveraged currency speculation.

The Tokyo Financial Exchange, for instance, launched its Click365 forex platform in 2005... 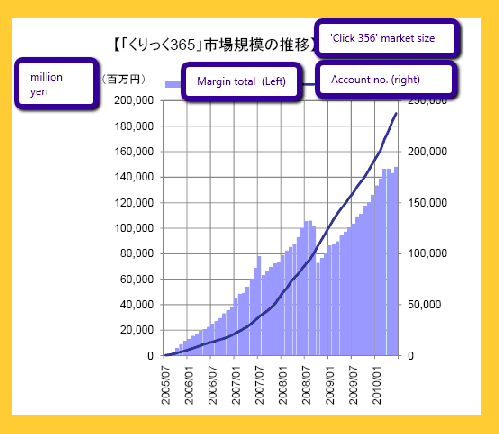 Sound at all familiar? It isn't just Gold Bullion that catches a bid when the returns paid to cash fall to zero. And absent a sharp decline in consumer prices – rather than the low single-digit declines seen year-on-year in Japan over the last decade – it isn't just US consumers who might doubt the official cost-of-living data either.

A consumer survey run by the Bank of Japan found people felt inflation was running above 3.0% per year in Sept. 2009. After reporting a slight dip this spring, the 4,000 adults responding to Oct. 2010's survey pegged the true rate of consumer-price inflation at 1.3% per year...eating almost all of the 15-year Japanese government bond's current yield (5-year debt yields 0.3%) and delivering negative real-returns-to-cash almost as bad as those now suffered by US and UK savers.

To repeat – two things happen to Gold Investment when the returns paid to cash fall to zero:

Anyway, thought experiment over. Because that brings us full circle...back to positive inflation and negative real rates...but with 600 billion extra dollars about to pumped into global asset and commodity prices by today's deflation-fearing Federal Reserve.