END_OF_DOCUMENT_TOKEN_TO_BE_REPLACED

Guessing what will happen to the Gold Price if deflation bites...

DOES THE PRICE OF GOLD rise or fall in a deflation?

Give yourself an extra point for spotting the trick question. It's already tripping up plenty of would-be answers. Because gold must fall during deflation, since it rose so much during the inflation of the 1970s – right?

"Gold Prices, in real inflation-adjusted terms, unsurprisingly tended to increase during inflationary times," nods one commentator, writing in London but posted at the Business Times in Singapore. "Its purchasing power tended to sag during depressions and deflation."

The source for this claim? Besides syllogism ("The '70s gave us inflation and a gold bull market; ergo, the opposite must be bad for gold...") it was apparently Roy Jastram's The Golden Constant, that dry, dusty study of gold's enduring stability across the very, very long run by the end of which we will all be deader than disco.

First published by Wiley in 1977, The Golden Constant has just been updated by Jill Leyland, former chief economist at the World Gold Council, for Edward Elgar Publishing. I've not seen the re-issue yet (not at £72 a pop, some $120). But unless Jill's scrapped Jastram's research entirely and written a wholly new monograph, the conclusions should in fact be precisely the opposite.

Gold, like silver, gained in purchasing power during deflation but lost out to inflation. The only things to rise during commodity-price inflations were commodity prices and social unrest.

Three centuries of data are hard to ignore, but it seems they can be misread – not least when skim-reading for a quick book review. (If you care for the big picture, Jastram's charts are available at the Golden Sextant.) Those three centuries of data can also prove a real bore to analysts without a library pass, as Jastram apparently makes for "a very dense read" says a Seeking Alpha post today. (Its summary table then misses the very same deflation of 1723-1738 we skipped by mistake and haste in our essay online, Pick a Number, last week.) And all those numbers can also mislead the unwary if the key point's neglected:

Gold, like silver, rose in value during deflation. But back then, it was still used as money, and it lost out to inflation back when that role applied, too. Since the end of WWII, we've not suffered the first and only endured the second...and gold has risen sharply in purchasing power as the supply of what we've come to call "money" has swelled by an order of magnitude or ten.

Meantime – and not coincidentally – gold ceased being money beyond offering a store of value (and money that's free from default risk, as well). Little wonder that inflation really took off after the gold-edged limits to money-supply growth were cut by the Nixon White House at the start of the '70s.

And we all know where that little trick got us... 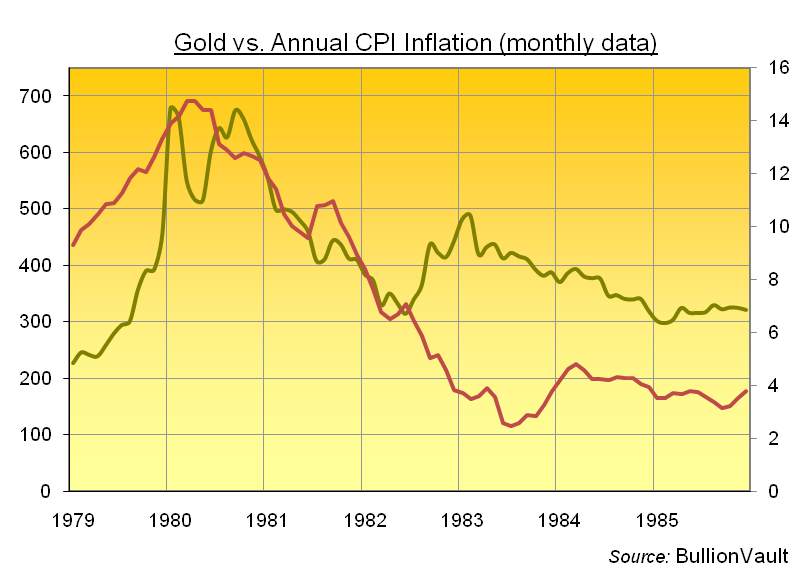 "What the press and policymakers are calling 'disinflation' is simply deflation, the deterioration of the monetary standard characterized by falling prices," wrote Jude Wanniski, formerly an associate editor of the Wall Street Journal and advisor to Ronald Reagan, in 1982 – slap bang in the middle of what he'd come to call the "Volcker Deflation" in honor of the tall, cigar-wielding, inflation-fighting Fed chairman.

Paul Volcker took US rates to double-digits and left them there, wringing inflation out of the system and squashing the Gold Price – then (as now) a key marker for the stable value (or not) of money.

"There is a confusion because commodity prices [in 1982] are falling even as the cost of living continues to rise," wrote Wanniski to his Polyconomics clients. "[But] the price of gold, the 'commodity money par excellence', is the surest proxy for all prices, goods and bonds...[and] the recession that threatens to become depression could also swiftly turn into a major bull market if the Fed arrests the Gold Price decline at $300, signaling an end to continued deflation and the monetarist policies that have guided the open-market desk."

Why the call for active Gold Price intervention? Because just over 10 years after Richard Nixon tried driving a stake through the undead Gold Standard's heart, "Legally defining the official dollar/gold price and backing it with convertibility [was] the only means by which...the markets can be assured that Volcker's successors would not be tempted to try another monetarist experiment," Wanniski believed.

Fast forward the best part of three decades, and here we are again, trying to heat-treat the mutant spawn of a new "monetarist experiment" that's also broken out of the lab and started to munch bystanders on the corner of Wall Street and Main.

Wanniski's point back then was that, to prevent the end of the world, the Gold Price should be forced higher, making Dollar devaluation explicit and pumping cash into the economy that could then be lent and spent to unwind that "deterioration of the monetary standard characterized by falling prices."

Only an idiot would pick a fight with Wanniski's terms of reference. So please – if you'll hold my jacket a second...

The vicious disinflation of the early 1980s stemmed the monetary crisis but failed to morph into outright deflation. That defied history as well as economists, since all previous prolonged destructions of monetary value had been naturally righted by falling prices to follow. But by the late 20th century, as today, gold was not money, not as a means of exchange, and nor did its above-ground supply dictate the limits of paper money in issue.

Absent the money-supply limits which the Gold Standard imposed on the world, people rightly guess that double-digit inflation would prove rocket-fuel for the bull market in gold. Yet the purchasing power of gold nearly doubled during the Great Depression, and it's risen four-fold during this decade's low consumer-price inflation as well.

Why? Because both those periods of low price-inflation saw the money-issuing authorities devalue the currency, first with explicit reference to gold but now without daring to name it. Roosevelt in the mid-30s slashed the Dollar's gold content by 40%; the Greenspan/Bernanke Fed devalued the Dollar again to sidestep a DotCom Depression, keeping real interest rates at less than zero between 2002-2005.

The maestro's apprentice applied the same trick in the back-half of 2008, but so far to no avail. Not on the official CPI measure, now negative for the first time since 1955. Here in the United Kingdom, the same wheeze is being used to try and avert the first fall in retail prices in five decades, and even the "vigilant" European Central Bank is pumping out money – a near half-trillion euros in 1% loans on Wednesday – in a bid to revive bank lending, swamp the FX markets with single currency, and pull Germany out of its first flirt with deflation since the 1930s. 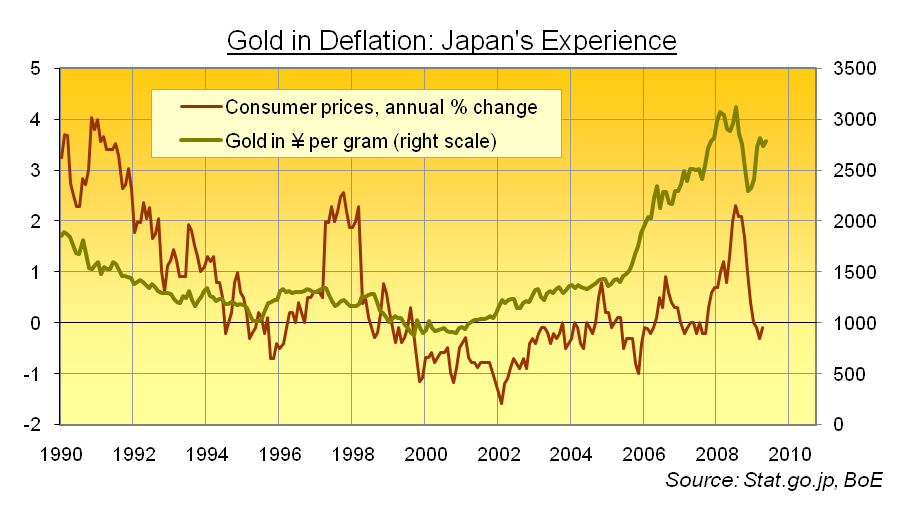 Just such a devaluation – and again, absent any stated reference to gold – was attempted by the Bank of Japan a little less than a decade ago.

Indeed, Japan is the only developed nation since the end of the Gold Standard to have suffered an extended deflation in prices. So far, at least. Germany and Switzerland look set to try for a re-wind, and unless the Dollar can outpace the Euro's descent, we might yet see truly sub-zero inflation in the United States, too.

But whatever that should mean for Gold Prices, all other things being equal, just doesn't matter. Because the Gold Price will not get chance, as all other things are not equal, and the policy solution – rank devaluation – can only make gold more appealing to investors and savers, whether the "monetarist experiment" of TARP, Quantitative Easing or a half-trillion euros in 1% loans proves successful or not.

Japan's slump into deflation coincided with the Bank of Japan's "zero interest rate policy" (ZIRP) at the start of this decade. It also saw the Gold Price worldwide hit rock-bottom and turn higher – a move that analysts (including us) have typically linked to US monetary moves and investment cash looking for safety as the Dotcom Bubble exploded. But zero-rate money from the world's second-largest economy shouldn't be ignored. And today, zero-rate money is all the developed world has to offer.

This trick might not beat deflation. But it might just spur a whole new rush into gold regardless.