END_OF_DOCUMENT_TOKEN_TO_BE_REPLACED

The world's top four currencies are the stand-out losers vs. gold...

The UPSHOT from last week's London Bullion Market Association conference in Berlin, writes Adrian Ash of BullionVault, was that there's more sound and fury about bullion in the financial pages than in the dealing rooms right now.

Several dealers I spoke to said business was quiet, if not boring. Gold's current rally, said one speaker, "punches above its weight in terms of significance." Another noted that at the start of September, when Dollar-gold surpassed its June high, volatility was at a 5-year low. (It still is. Silver Price volatility has fallen to a 3-year low as it broke three-decade highs.)

You can see this lack of frenzy in prices alone, in fact – but only if you don't focus on the Dollar alone... 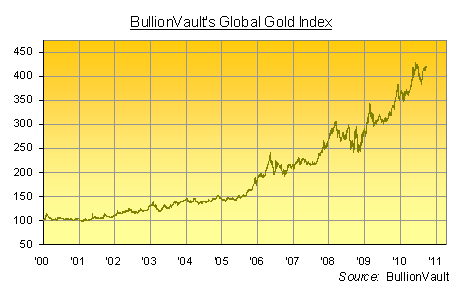 Reviewing our index of gold vs. the official currencies of more than half the world's population – and more than two-thirds of its annual economic output – three points stand out from the last 3 months' action:

That third point is only to be expected, perhaps. Because the Dollar's decline made headlines across the summer/start of fall. But crunching the numbers further again, two truly remarkable points jump out from there...

#1. July-Sept this year was only the third quarter since the start of 2000 when the Dollar was the weakest major currency against gold. (The currency most commonly bottom-of-the-heap has been the Brazilian Real, but it's not been worst-in-show since 2005.) The USD was previously in the dog-house during Q4 2004 and Q3 2007 – periods when, just as over the last 3 months, US central-bank policy stood out as deliberately weakening the Dollar compared with its paper alternatives;

#2. Over the last four quarters (starting Oct. 2009), the stand-out losers against gold have been the world's top four reserve currencies:

Yes, the world's most reservable currencies have topped the bottom of the league-table against gold for the last four quarters running – and in reverse order of reservability, too!

Again, this countdown shouldn't surprise us, perhaps. Because while the US, Eurozone, UK and Japan now account for 97.9% of officially reported FX reserves worldwide, they've seen little reason not to abuse that demand, slashing interest rates further than any lesser currency-issuer could dare (0%, 1.0%, 0.5% and 0% respectively). And oddly enough, emerging-market central banks have been reducing the Big Four's weighting in their reported reserves right alongside, actually nudging it below the "advanced economies" weighting of USD, EUR, GBP and JPY since the start of last year.

Gold Bullion, of course, pays nothing you in interest. But that zero-yield is no longer a handicap against the world's most heavily-owned paper money. As BullionVault never tires of saying, the "opportunity cost" of holding gold's rare indestructibility in your portfolio has evaporated. Little wonder it's getting a strong bid in the market – and little wonder the strongest bid is coming against the world's most heavily-owned paper.