END_OF_DOCUMENT_TOKEN_TO_BE_REPLACED

Gold Prices are horribly correlated with the stock market right now. Not that it matters...

EVEN THE BULLS are turning bearish on Gold Prices. Or rather, they'd like to, writes Adrian Ash at BullionVault.

"Everything's beginning to look as if it's turning the corner, we've passed the point of maximum despair," reckons Nick Moore, head of commodity research at state-owned Royal Bank of Scotland in London. He cut the bank's bullish 2012 forecasts for all precious metals except gold back in January.

But now,"A number of things which would have kept people with an eye on the upside for gold have now been neutralized." And despair over, gold must be fated to sink, right? Not quite.

"Gold can now settle back," Moore tells Bloomberg, plumping a cushion and fetching a foot-stool.

Over at Mineweb, "Is gold now the contrarian play?" asks Geoff Candy, pretty much answering his own question by asking it, and also noting that analysts pointing to "warning signs" can only find "fairly optimistic" ones for Gold Prices.

"The one danger with gold is that the bullish consensus on gold is now higher than it's been at any time for the last two or three decades," says former base-metal trader (and Eurocrat nemesis) Nigel Farage, speaking to Eric King. Markets do whatever it takes the screw the most people the most, of course. But while "there is a danger that the short-term speculative market finds itself a bit long of gold," says Farage, the outcome really isn't that bad.

"You can't discount – when a market is shaped that way – that it could have a dip."

Jeez, let's fetch it a towel and a bathrobe! Won't anyone call gold's bull market dead?

"Ten years ago gold was not owned by retail investors but was primarily held by central banks," says UK asset manager Armstrong Investment, overlooking the world's biggest holders both then and now – Indian households. "Strong performance, uncorrelated returns with other asset classes and the advent of easily-accessible ETFs have seen investors make ever-increasing allocations to the precious metal." SocGen strategist Dylan Grice agrees, also noting that "Gold just isn't the misunderstood, widely shunned asset it was a few years ago. Isn't the gold bull market now long in the tooth, with better opportunities to be found elsewhere?"

But again, both analyses find more cause to stay long of gold than sell it, let alone short it. Grice because the real crisis – the final calamity awaiting Western state finances – still awaits. Armstrong because "an allocation to gold [still] makes sense in a diversified portfolio."

Still, "Investors should not view [gold] as a safe haven without its own inherent risks." Most notably because its correlation with equities – the way it moves in (or out) of line with stock markets – has risen to what seems a high level since risk assets bottomed in early 2009. 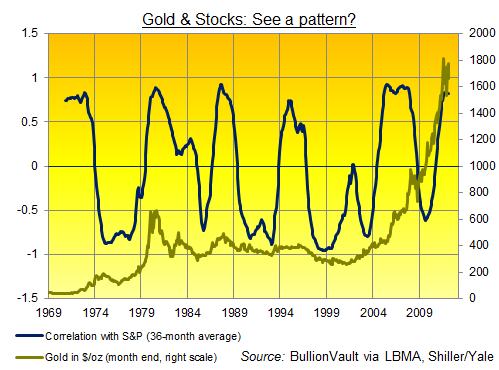 "Over the long term," says Armstrong, "gold has been a perfect portfolio diversifier – positive returns with no correlation to traditional asset classes. [But] over the past three years Gold Prices have shown a correlation of 0.8 with the S&P500."

Now, gold and the US stock market would show a correlation of +1.0 if they moved in lock-step together. They'd show a perfectly negative correlation of –1.0 if they moved in precisely opposition. So the 3-year reading of +0.8 does indeed suggest gold has lost a good chunk of its risk-spreading power, moving higher as stocks have also moved up and threatening a sharp drop if equities now lose their mojo.

What really matters is the huge swings inbetween. See, all told, and since Gold Prices began to move freely in the late 1960s, gold has moved in the same direction as stocks – on a quarterly basis – for pretty much half the time. It's gone the other way for pretty much the other half, leaving gold a great diversifier overall. Neither positive nor negative. Just unrelated.

Or as a statistician would put it, the rolling 12-month correlation between Dollar gold and the S&P 500 index has been 0.04. That's as good as zero. There's really very little link between gold and equities long term. And what link there is comes through, say, a strong correlation today, and then strongly inverse correlation tomorrow. Net-net the result comes out at sweet nothing. Provided you buy and hold for the long run, rather than daring to time a move in (or out) on where the latest correlation now stands. Or where you judge the rest of the world to be, relative to the 11-year bull market in Gold Prices.

Looking to start or add to your Gold Bullion holdings today...?