END_OF_DOCUMENT_TOKEN_TO_BE_REPLACED

The SNB can neither squash gold, nor (yet) destroy its own currency. But not for lack of trying...

IT'S A GOOD JOB that Gold Bullion is just an inert lump of metal and holds no grudges, writes Adrian Ash of BullionVault.

Because twice in the last decade, the Swiss National Bank has nearly halved the value of gold as a proportion of its total reserves. Yet still it sits there, helping save the SNB's blushes when policy fails.

"The Euro-crisis has torn a deep hole in the calculations of the Swiss central bank (SNB)," reports Tages Anzeiger. "It spent CHF 104.9 billion on Euros [US$104bn] in the first-half of 2010, leading to foreign exchange losses of over CHF14bn [$13.3bn].

"Bottom-line losses were reduced to CHF4bn however [$3.8bn] by gains on other foreign currencies like the Japanese Yen, plus the strong rise of the Gold Price, which revalued the gold reserves of the central bank."

What does Gold Bullion have to do to get some respect...? 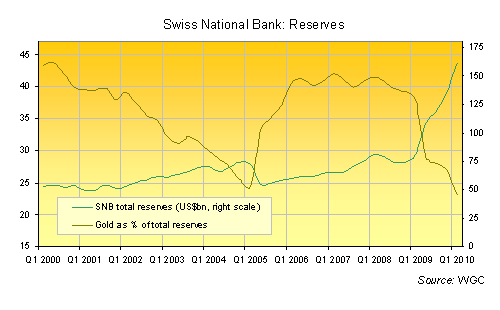 Long before gold hit last month's record above CHF 46,600 per kilo, gold's first plunge as a proportion of Swiss reserves was very deliberate and clearly flagged.

Gold Bullion sales totaling 1300 tonnes between 2000 and 2005 coincided with a gentle rise in total reserves, slashing the metal's weighting from 44% to below one quarter. Not coincidentally coinciding with the launch of the Euro – bureaucracy's greatest monetary hubris to date – the Bank wanted to reduce its huge gold allocation, and buy apparently more useful, more valuable things instead.

The surge in the Gold Price vs. the Swiss Franc (and every other currency too) from the middle of last decade soon put paid to that, however. And so the second plunge in gold's weighting, in contrast, has come thanks to a trebling of the SNB's total reserves, driven in no small part by its print-Francs-to-buy-Euros policy, aimed at keeping Swiss exports competitive.

But again, no dice! The Swiss Franc has risen vs. the Euro regardless of the SNB's huge money creation, gaining 12% against the single currency since quantitative easing began at the start of 2009. And gold still accounts for almost one quarter of Switzerland's central-bank reserves, now massively swollen to US$162bn.

Not that gold enjoys such jokes or historical irony, you understand. It is simply a lump of rare, indestructible metal, after all.

Got gold? Get a free gram of physical Gold Bullion here at BullionVault now...