END_OF_DOCUMENT_TOKEN_TO_BE_REPLACED

Who needed gold when a clampdown on speculation collided with strong real returns paid to cash...?

It wasn't all doom and gloom in the pink pages. "Lazy millionaire will back energetic individual," said one classified advert; "Property investment opportunity, 18% by 1982," another promised. But the casual investor reading the broadsheet at breakfast, or the professional trader struggling to flick open his FT on the Tube, would be forgiven for feeling as bleak as the weather.

It would rain all week in London. Fear of yet higher inflation battled only the fear of recession and social unrest.

"Pickets threaten oil rigs...
"Inflation forecast at 21 per cent...
"Oil-rich countries seek to preserve the value of their investments..."

Yes, Wall Street and the City had ended the previous day, Monday 21st, higher for the session. But they rose on fresh gains in oil, energy and mining stocks, as the FT explained, thanks to fresh inflation fears driving the under-lying commodities north. And their rise was nothing compared to gold, up by more than one-half from just 3 weeks before.

With crude oil already closing 1979 more than 160% higher above its start at $40 per barrel, then a record-high, commodity prices continued to force sharp declines in output and payrolls across the globe. Even workers in the bull markets weren't safe!

"If the value of gold stays as high as it is, there is no escaping the fact that sales will drop," the Financial Times quoted Manfred Durst, then vice-president of of the British Jewellers & Giftware Federation.

"The increased cost of [silver and gold] is also certain to lead to liquidity problems for small manufacturers and a loss of jobs," the paper went on. "Short-time working has been introduced in both London and Birmingham, the country's two major jewellery centres. There have also been redundancies in Sheffield."

More spectacular still – and echoed this year by Indian manufacturers hurt by this decade's bull market in Gold Prices, too – "The fluctuation in the price of gold is regarded by jewellery manufacturers as a problem equal in seriousness to its high value," the FT added, "and they are amazed to see retailers selling gold at prices which do not reflect replacement costs."

How could retailers or manufacturers hope to keep ahead of the Gold Price when volatility was as violent as this? 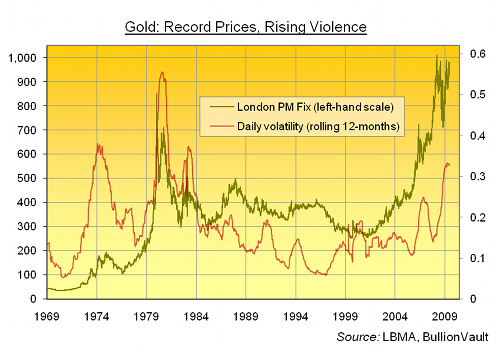 Further up the value chain that Monday – and across town in London's hushed auction rooms – "Silver melting should be halted," begged the chairman of Phillips.

"Mr.Christopher Weston said that in the silver and gold panic many people were selling irreplaceable antique silver items," the FT reported next morning, on 22 Jan. 1980. "This was destroying the national heritage and was short-sighted."

But just as the current bull market has sparked a flood of "scrap" metal from cash-strapped consumers digging out broken jewelry and unwanted gifts, so antique owners three decades ago couldn't see beyond the high spot prices quoted in their daily paper.

"At Friday's sale of silver at Phillips," the FT noted, "items achieved around £15 an ounce – higher than silver bullion prices." Whereas today,  "You can teach a monkey to buy gold, but you need an expert to tell you if what you have is an antique," says the head of Pacheco's Jewelry and Gifts in Taunton, New England. "You can scrap it [at a gold party] for $100 or have someone recognize it as a $600 design piece."

But hell, "We're having the house decorated, and this will help pay for the paint," says one UK party-goer to the Daily Telegraph – a "well groomed, blonde housewife" apparently. (The Telegraph must think such things matter...) "These parties are a terrific idea, so much more civilised than going to a pawnshop."

Thus the 21st century's depression-era version of Tupperware parties rolls on, hoovering up gold at an unspecified percentage of spot-market value. Add the forced sale of investment pieces by Indian and South-East Asian savers at the start of this year, and scrap flows may have totaled 1,000 tonnes between January and March. Unlike the 1980 top in the precious metals' bull market, however, this recent flood of metal looks to have exhausted itself very quickly according to refinery comments in Europe and Asian gold dealers. That spike – equivalent to some 40% of annual gold-mining output worldwide – means "that there is not going to be as much available in the next gold rally," says one industry insider, speaking to Mitsui's Refining Monitor. "Physical selling has declined," agrees a London dealer.

Besides, it wasn't scrap-metal flows which killed the previous bull market in gold and silver, anyway. For just as jewelry demand helps little in driving up prices, so net selling by jewelry consumers has struggled to out-weigh investment and speculative demand since the financial crisis began. Instead, and as John Hathaway at Tocqueville Asset Management notes, "More important than the price advance is the progression of investment thinking," with fully 24% of the GLD Gold ETF listed in New York now held by just 20 investment funds.

This "high concentration among a relatively small number of holders also suggests that exposure to gold in the investment world, and especially the public, remains low," Hathaway says. But most telling of all, we guess here at BullionVault, is the fact that this quiet move into gold by such clued-up investors as John Paulson, Blackrock Advisors and David Einhorn's Greenlight Capital comes into cash-gold positions, rather than leveraged speculation via the Gold Futures pit. Whatever you think of the exchange-traded funds and their trust-deed mediation of ownership rights, they're not buoying the gold price by dint of borrowed money or debt. Which in contrast, is precisely where the spark for gold's rapid retreat from $850 an ounce on 21st January 1980 took hold.

"Gold and silver prices yesterday fell back from new record highs," the Financial Times reported that Tuesday morning, "following moves in the US and Germany to dampen speculation."

Gold had leapt from $250 an ounce to above $800 in the previous 12 months. So the "gold and silver panic" couldn't much be ignored by the Comex or Frankfurt authorities. But unlike the Gold Coin hoarding of the early 1930s, this surge in gold's purchasing power was being driven by leveraged speculators. Shutting down the highly-geared trader would soon shut down the leveraged leaps in metal prices as well.

"The New York Commodities Exchange halted all trading in silver except deals at liquidating existing positions," said the FT next day. "It also increased from $5,000 to $15,000 the cash margin per contract in gold. A year ago it $750." (Today it stands shy of $4,000 despite nominal prices trading 10% higher than that Jan. 1980 peak.)

"In West Germany, from February 1," the Financial Times added, "trading positions in gold and precious metals will be included in the rules applied to German banks limiting their exposure to foreign currency risk. The deutsche mark value [across gold and FX, and including leverage] must now not exceed 30 per cent of shareholders' funds."

How quaint the world was three decades ago! Can you imagine? At the top of the last bull market in gold, leverage was capped at one-third of shareholder funds, rather than the 30-to-1 leverage applied by Lehman Bros. to its "investment" book just before it exploded... 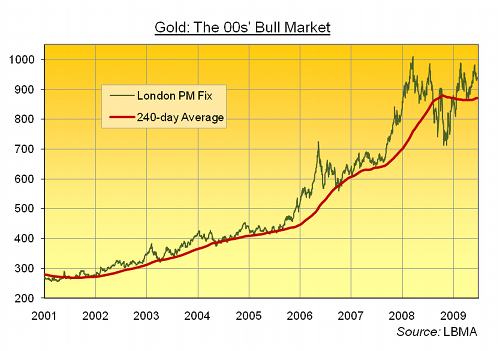 With speculators forced to re-value or quit their positions on Jan. 21st 1980 – not least after the 52% jump in Gold Prices since New Year's – the heat quickly fled from the market. The Hunt brothers' failed corner of the silver market only sped up the rush for the exits. It then became a stampede as the Federal Reserve finally set about defending the Dollar with double-digit interest returning above-inflation rates to cash.

By the end of Feb. 1980, the Gold Price was back to $630, fast heading for $400 by summer the next year. Real US interest rates were then paying some 10% after inflation. Who needed gold or silver, whether on leverage or cash?

Who doesn't need a little today?