END_OF_DOCUMENT_TOKEN_TO_BE_REPLACED

SPECULATIVE BETTING on fresh gains in Comex Gold Futures and options now equals a record-busting 752-tonne position, yet this is not a bubble according to Michael Pento of Deltaga.

"I don't know if it's going to be a bubble," he tells Tech Ticker. "Gold is real and honest money. It's rare, it's very beautiful, it's virtually indestructible. It's real money that cannot be corrupted by the government. You cannot increase the mine supply of gold by fiat, by decree."

Let's say otherwise. Let's say that gold prices, surging by almost $100-per-ounce in barely a month, are very much in a bubble...blown up by near-zero interest rates worldwide and a sharply negative cost of borrowing after inflation. Were that the case, the question before potential and existing investors would be simple:

Is this "irrational exuberance" or a "permanently high plateau"?

Alan Greenspan applied the former to US price/earnings in Dec. 1996; Irving Fisher said the latter of US equities in Oct. 1929. Both were looking at what history would decide were clearly bubbles in hindsight. But Greenspan was three years and 105% early.

Fisher spoke less than 72 hours before the Great Crash began...

Of course, Buying Gold always looks "irrational" to most financial advisors and commentators, because it doesn't pay an income or yield.

No matter that gold has beaten all other asset classes bar none since the start of the decade. People looking to Buy Gold (the blue line of Google searches above) have been underwhelmed with content and analysis online, despite outstripping the volume of "buy stocks" searches (in red) for nearly five years.

Gold buyers have also averaged 20% gains year-on-year since this point in 2004. That compares with -0.6% on average from shares, but so what? Check the spike in "buy stocks" stories highlighted by Google Trends' lower chart during October last year. Just when gold turned sharply higher – and stocks still had another 40% to fall – the news-flow focused on bottom-fishing in equities.

Gold's productive value is also judged to be nil next to foodstuffs, energy or base metals – materials that vanish in use and thus display a clear supply/demand dynamic. Whereas all the gold mined in history, being indestructible, is still with us today...some 165,000 or so tonnes. That makes a fundamental case for gold built on tight supply, rising demand absurd. Nor can TV or newspaper journalists get used to applying "exuberance" to gold, the ultimate in gloom-and-doom insurance outside your local gun-store.

But while permanent plateaus are harder to find in finance than geology, gold's peg-legged clambering of the last nine years most certainly puts it higher than it started.

What's powering the Stannah Stair-Lift today? In a word, leverage. 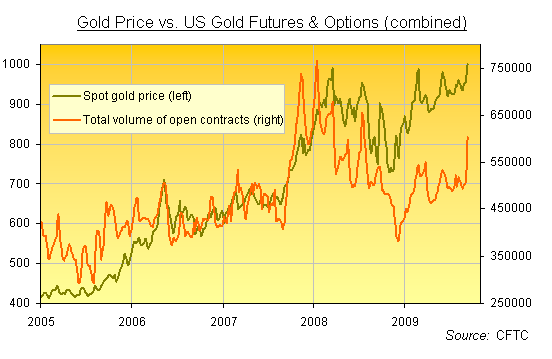 Liquidity (meaning "leverage", as 2008 proved) has flooded back into the big investment houses, thanks to tax-funded injections, quantitative easing, and central-bank asset guarantees.

Near-zero interest rates sure help as well. And that, in turn, has enabled what we used to call investment banks to revive their prime broking services, offering to deal whatever leverage-hungry clients want most, and financing the trade with that ultra-cheap money.

The most leverage-hungry clients, outside of the banks' own proprietary trading desks, remain hedge funds – hedge funds which doubled in number from 2003 to end-2007 (Hedge Fund Review), growing their assets under management from $600bn (Goldman Sachs' estimate) to $2.9 trillion (HedgeFund.net) before hitting the credit crunch precisely as Bear Stearns blew up. 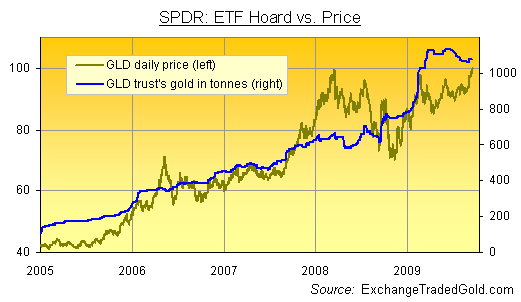 Just as the long-run bull market in gold threatened to keel over on this sudden withdrawal of derivatives leverage, however, the physical appeal of owning gold – or a near proxy, at least – came into its own.

Physical gold investment surged in the back-half of 2008 and early 2009, rising 150% from July-to-Dec. 2007 before adding two-thirds of that fresh record between Jan-and-March this year alone. (Data courtesy of the World Gold Council.) And now that deflation seems to be tipping ever-so-smartly into inflation – and the surge in ETF, coin and bar demand has eased off – leverage is back just in time for gold's typical autumn move higher, a pattern seen 20 years in the last 40 and delivering some 15% gains on average this decade between Sept. and Feb. even for cautious investors buying on cash, rather than margin.

Inflation, deflation, who cares? Not the Gold Price, it seems. Because whether it's exuberant hedgies or panicked private investors with something to lose, this "bubble" in gold – if that's what you choose to call it after a decade of beating everything else, and four years after it broke sharply higher versus all currencies, not just the Dollar – just keeps expanding.

Sub-zero real rates of interest sure help; media hype, to date, is missing; competing asset classes continue to disappoint, struggling with the worst credit recession in eighty years. But when these three factors reverse, Buying Gold may well become irrational – and whatever exuberant plateau it's reached might well prove less than permanent.