END_OF_DOCUMENT_TOKEN_TO_BE_REPLACED

If you think the US Dollar's losing out to gold, just take a look at the British Pound...

WHAT WOULD IT TAKE for the mass of investors to wake up and Buy Gold?

Are they still waiting for a new all-time high perhaps, even after watching Gold Bullion Investments beat stocks and bonds for more than six years?

Well, the Gold Price just made a new record high for British investors. You might not think that's possible, what with the Pound Sterling now breaking new quarter-century highs against the Dollar above $2.06.

If you've spent any time in London lately, you might think the idea laughable. At current exchange rates, a pack of cigarettes cost me nearly $12 this weekend.

Oh sure, no doubt I should quit...but do I also need to stop taking the Tube (now more than $8 for a single journey), eating lunch (up to $6 for a factory-made ham and cheese sandwich) or going to the cinema (at least $20 before you buy popcorn)...?

The financial media here in the British capital, meantime, remains fixated on the Dollar Price of Gold...almost as though it's ashamed (or ignorant) of the Pound's loss of gold value.

But hey, Dear Old Blighty is free and clear of the problems now causing the US Dollar to sink against gold, right?

Well, not according to gold it ain't... 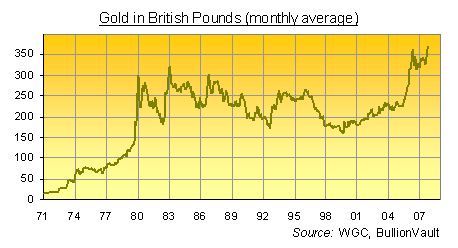 "Debt-ridden Britons owe £216 billion [$445bn] on credit cards and unsecured loans but are refusing to rein in their spending," reports the Metro newspaper, given away free on the Tube today.

"It means the country is slipping £15 million further into the red every hour or £373 million a day."

Put another way, the British nation is growing its household debts by more than £6 per day for every man, woman and child. That's excluding the government's outstanding debt, valued at £574.4 billion by the end of the 2006/2007 tax year.

If you want that number in US dollars, personal debt is the United Kingdom – home to the "strong Pound" – is now rising by $1 million every two minutes. Total household debt now stands above 160% of personal income, and it's just overtaken an entire year of economic output.

Worth some $1.18 trillion on top, outstanding government debt is equal to 42.6% of GDP, the highest proportion in nearly a decade. It's also 10 years since the British nation last managed to break-even on its international trade in goods & services.

Our balance of payments deficit reached more than £48 billion in 2006 (nearly $98bn), more than 10 times the worst gap of the mid-1970s, back when the trade gap threatened "a violent withdrawal" of foreign investment according to internal government memos.

Energy Minister Lord Balogh, an economist by trade, privately warned the Prime Minister of a "possible wholesale domestic liquidation starting with a notable bankruptcy...The magnitude of this threat is quite incalculable".

The risk of a run on the Pound became so great – provoked in no small part by government debt hitting 53.8% of annual GDP – that Britain, led by a Labour government just as today, begged the International Monetary Fund (IMF) for a bail out to help it cope as unemployment and inflation reached "exceptional levels".

The Pound began its long descent from $2.42 barely $1.08 over the following decade, while unemployment rose to 10% of the working population as inflation remained above double-digits between 1973 and 1982.

"Expect a sustained knock-on impact of the recent credit crunch on the wider [UK] economy," warns David Miles, chief UK economist for Morgan Stanley in London. He's not being alarmist; he's simply summarizing the Bank of England's own view, as stated in its recent Financial Stability Report.

In particular, the Bank of England fears, the rise in the price of credit will push far beyond the spike in short-term London money-market rates. "Partly that is because risk premia and profit margins for lenders had been squeezed to unsustainable levels," explains David Miles. "Indeed, in the UK mortgage market, spreads had fallen to levels that made it hard to make money."

Now lenders are looking to make money by lending wisely – and at a profit – once again. Hence the collapse in new mortgage lending seen in Sept. Down by one-fifth from the same month last year, said the Bank of England this week, new mortgage lending in fact sank by 27% from Sept. '06 according to the British Bankers Association's latest data.

First-time buyers are "potentially vulnerable" to the threat of falling house prices sparked by this collapse in new lending. Added to higher interest rates – now at 5.75% from 4.50% two years ago – the "sharp increase in the proportion of new mortgages with high loan to income multiples since 2004 has resulted in interest payments reaching 20% of first-time buyers’ average incomes," says the Bank of England, "the highest share since 1991" – the banner year for the last crash in UK house prices.

Private investors playing the property market may be even worse off, however. "Net rental yields remain negative," the Old Lady warns in her ironically titled Stability Report. "Bank staff estimate that after deducting costs, the rental yield was about 2.3 percentage points lower than the mortgage rate in third-quarter 2007.

What about the "smart money" of professional investment funds buying commercial and retail property in the UK – the next big thing according to press pundits and seasoned real estate experts alike? Oops! No again.

"Recent falls in UK commercial property prices and the more persistent falls in yields, along with the potential for overcapacity given a large pipeline of construction, make this sector particularly prone to further shocks and to rises in the cost of finance," says the Bank of England.

But surely the City of London – the powerhouse of the UK economy, now vying with New York as finance capital of the world – will forge ahead no matter what? The financial services sector has been growing at a greater than 10% annual clip, but the widely-respected Ernst & Young ITEM consultancy just halved that outlook in response to the credit crunch now forcing job cuts across the Square Mile. Researchers at CEBR, another London consultancy, believe 6,500 finance jobs will go as a direct result of this summer's credit crunch.

That guess-timate came before the real wipe-out begins after the third-quarter write-downs and losses reported by the entire investment banking industry in October '07. And all this while, gold...dumb, yellow, shiny gold...says the British Pound has never been worth less than it is today. In this race to the bottom, all prices are relative, of course. 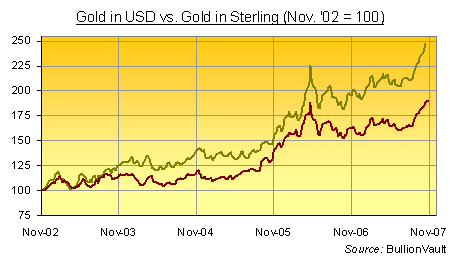 But the Pound Sterling could soon become the Dollar's poor cousin once again, just as it was during the global stagflation of the early 1980s.

So while Gold Priced in British Pounds may have lagged the Dollar-price for the last half-decade, it's just broken a new all-time – and it looks to be pointing higher again.