END_OF_DOCUMENT_TOKEN_TO_BE_REPLACED

It's almost as if the "long boom" of easy credit never happened...

IS U.S. HOUSING nearing its low? Priced against gold it just might be, says Adrian Ash at BullionVault.

Falling hard as the gold price doubled and more since 2006, the average US home is now priced at 103 ounces of gold – little more than one market-approved Gold Bar for settling a 100-ounce Comex gold futures contract.

Housing has only been cheaper in 26 of the last 121 years, and is currently priced around half the long-run average of 201 ounces. But might there be further to go? 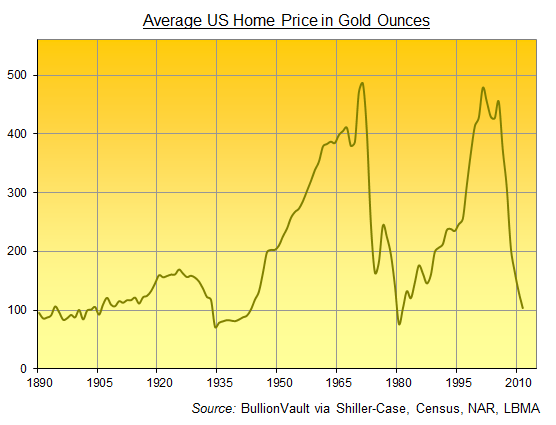 Unlike the fine content of a Gold Bar or coin, no two properties are ever quite an exact copy. So buying or selling the average home – especially in a nation of 313 million souls – can only ever be notional. But you get the idea, no doubt, and the point made on our chart above.

Since the housing bust began, the average US home has lost over 70% of its value in gold. It's dropped nearly 80% since the gold-market found its own floor back in 2001.

All told, swapping Gold Bars for bricks – whether as investment or a place to live – hasn't looked this attractive since the inflationary depression of 1981. US housing's previous low came during the deflation of the Great Depression. Never mind that the average US home doubled in size inbetween, or swelled another 40% since. Because whichever flavor of depression we've got today, the immutable object of unchanging, unencumbered gold has once more whipped back to its pre-20th century value against the ever-changing, credit-reliant market of residential housing.

It's almost as if the "long boom" of easy credit never happened. At bottom, the average US home cost the equivalent of 71.5 ounces of gold in 1934. Forty-six years later, it fell below 77 ounces of gold. Today's 103-ounce price tag isn't rock-bottom yet. But compared to the top of a decade ago, it's getting there.