END_OF_DOCUMENT_TOKEN_TO_BE_REPLACED

Gold is now more closely correlated with US stocks than with either the Euro or silver...

OKAY, this is getting weird. Too weird, in fact.

And weirder still, no one else has yet noticed... 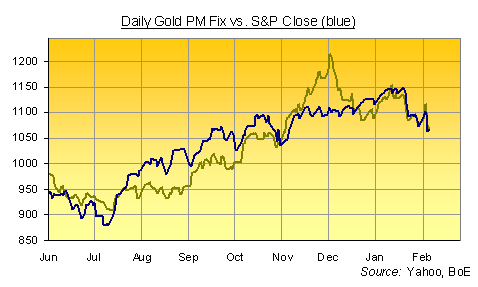 It might just be me...if not my nicotine D-T's.

But every time I look, there they are. Gold and the S&P500. Right at the same level. Minute by minute, session by session...ever nearer.

What in the Simon Cowell can this mean?

"It is easy to see why the Euro fell [this week] and one could then say that the Dollar is the obvious alternative," writes Phillip Coggan in his Buttonwood blog for The Economist.

"But what about gold? Hasn't that been rising on fears that spendthrift governments would debase their currencies? Yet when these fears started to look real [with the Eurozone crisis], gold fell 4% on Thursday..."

Well, yes and no. Gold always rises on fears of default or debasement. Because that's what it's for – hiding out when everything else falls in value, not least money itself.

But as gold has tripled and more over the last decade or so, it has also been rising thanks to that very debasement itself. Or rather, it's risen on the leverage which debasement enabled. Any pause or reverse in that leverage thus means the gold price can slip, whether or not debasement unwinds.

To recap: Gold began rising last decade because a handful of people saw deep trouble ahead in the race to slash rates. Also known as debasement, that race – led by the Fed, which then feared deflation in the face of untold corporate-debt burdens – took the cost of money below the rate of inflation pretty much worldwide.

Thanks to those record-low rates, global stocks all found their floor by March 2003. Yet the Fed waited another two years before teasing rates higher...and by then, this historic flood of cheap money had found a new use in finance:

Paying for leveraged bets against the Dollar itself.

Hedge funds, prop' desks...even retail investors and the weekly financial press...everyone saw that the Dollar was falling, yet the Fed refused to step out and catch it. Because the falling Dollar was also funding go-go days for home-builders, plus 10% year-on-year gains in the Dow.

Gold, naturally, was a prime mover in this bear market for cash. But with everything rising, gold's singular value seemed to offer just one more "risk friendly" trade.

You selling Dollars or Yen...swapping them for Euros or crude...? Then get yourself long of gold futures! Because that stuff's the ultimate carry trade, mate – a pure speculation on repaying your finance with devalued cash.

"Gold's sharp run is a case of mistaken identity," wrote Tocqueville Asset Management's John Hathaway in 2006. Barring what proved a blip in mid-summer that year, gold rose with everything else for 5 years ending in 2008. And it was never fuelled faster than when fresh "carry trade" dollars poured in thanks to the Bernanke Fed's record Dollar-rate cuts as the banking crisis broke... 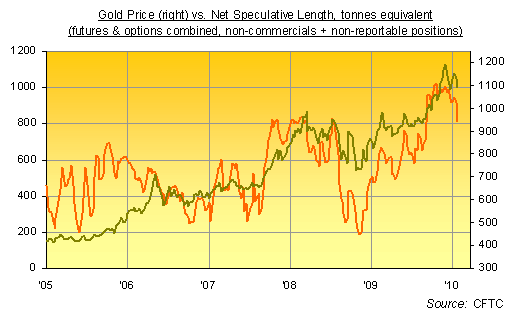 See how the geared-gold position leapt ahead of the price in late 2007...? See how it sank when Lehmans went down?

That's what happens when prime brokers, i.e. investment banks, throw money at hedge funds, only to blow themselves up. But then note how gold found its floor sooner – one-third off its top – while the "net long" held by leveraged gold bulls shrank by more than three-quarters.

But the global meltdown in stocks sparked by the meltdown in banking brought in a flood of unleveraged gold bugs, all demanding metal – not paper – and standing in line to buy Gold Coins and small bars at rapidly rising mark-ups. (A good number opted to buy the safest gold at the lowest costs by using BullionVault, too...)

Yes, Gold ETF demand also shot higher, reversing the 12% drop of July to Sept. 2008 before swelling by more than three-fifths. But that trust-fund exposure was also cash paid, in full. Because leverage was dead...and didn't revive until the tail-end of last year, when it drove the Gold Price once more, up to new record highs even as coin sales flagged and the ETFs shrank.

To repeat: There was no palpable crisis driving new money to gold as 2009 ended. Yet the price jumped above $1200 an ounce – and hit new all-time records in Euros, Sterling and pretty much everything else – even as Gold ETF demand barely touched its previous peak of six months before. That big move, very much like the spike of May 2006, came instead on leveraged bets, powered by the Fed's all-too cheap money, rather than because of it.

What next as Feb. 2010 unfolds? With next week bringing the Chinese New Year, might the "physical floor" rise up once more now that prices have sunk alongside gold's erstwhile bull-market chums? Please note that the weird daily lockstep with the S&P stock index runs deeper than mere nominal price. In fact, gold's daily changes this week – on a rolling one-month basis – have been more tightly correlated with stocks than with either the Euro or silver.

I'd guess that connection will break, one way or other. And it's hard to imagine a genuine Euro-currency crisis doing anything but sending new cash into gold.