END_OF_DOCUMENT_TOKEN_TO_BE_REPLACED

WHAT A BUSY WEEK for the International Monetary Fund – and it's barely half-way through as of Wednesday!

Just how busy will the IMF get when it helps host the G7 meeting of policy wonks from the world's seven richest nations in Washington this weekend?

Rumors were that the assembled finance ministers – from Europe, Japan, the UK, Canada and of course the United States – wanted to chew over joint intervention in the currency market. The plan? Buy Dollars to support the US currency's value, easing the surge in commodity prices and helping export-dependent economies avoid a race-to-debase as they try to stay competitive.

But could the G7 worthies really be so dumb...?

On Tuesday the IMF then laid out plans to re-organize its own finances, selling 400 tonnes of gold reserves to help cover a $400 million deficit in its $1 billion budget.

Tuesday night saw the IMF warn that total write-downs (i.e. balance sheet losses) due to the collapse of subprime US mortgage lending may reach $945 billion.

"It is now widely acknowledged that public measures are needed in a number of areas," claimed the IMF – established at the end of World War II to help keep the world's financial system in check, with the newly-crowned US Dollar as king of world currencies.

"In particular," the IMF added, "there may be a need to shore up the prices of various types of securities to prevent fire sales."

And then on Wednesday, the IMF cut its forecast for world economic growth in 2008 to 3.5% from the 4.2% it had predicted only three months before.

"Further," says the head office of analysis and advice for 185 member nations, "world growth would achieve little pickup in 2009, and there is a 25% chance that the global economy will record 3% or less growth in 2008 and 2009, equivalent to a global recession."

Pretty much the entire globe has been downgraded by the IMF's chief economist, Simon Johnson, starting with a "mild recession" in the United States. Which leaves him, oddly enough, scratching his head at the collapse of the US Dollar.

"The effect of the financial turmoil in the United States has been to lower the prospects of growth," he said in Wednesday's World Economic Outlook 2008. "But – somewhat paradoxically – it has also increased oil prices, metal prices, and of course food prices."

How paradoxical exactly? As BullionVault began pointing out back in August 2007, the subprime crisis might knock a hole in European and Japanese pension funds. But it remained a solely domestic US problem for all that the forex markets would care.

Plunging property prices tend to go hand in hand – squeezing on tight like a child in a crowd – with a falling exchange rate. Just ask British consumers about their 1990-92 slump in real estate prices.

Or ask them again, jabbing a thumb in their eye, about what's happened to Sterling since the latest house-price slump began in late-summer '07. 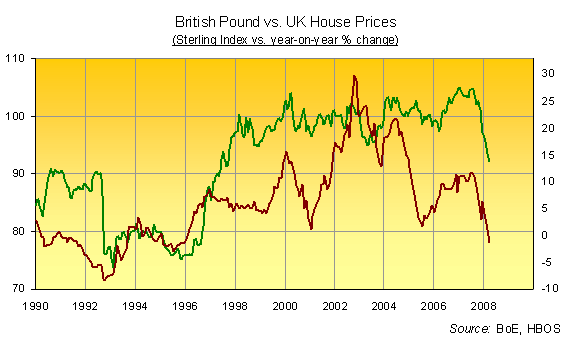 That's why the sudden surge in the Dollar seen in August last year presented investors and savers with such a fantastic opportunity to get ahead of the curve and defend their wealth.

The initial surge in the Dollar – which pushed the Euro down from $1.38 to $1.34 by the start of Sept. – came thanks to a dash for cash by the world's biggest banks.

The US Dollar being the world's No.1 money, cash equaled greenbacks. (Still does...for now.) And selling everything else to raise money – for settling lost trades and client redemptions – the panic marked what might prove a last chance, during this Dollar bear market at least, to swap Dollars for gold below $700 per ounce.

Fast forward to April '08, and the very week that the International Monetary Fund said it's going ahead with an IMF Gold Sale of 400 Tonnes (pending US approval, which looks a dead-cert), "it seems that dealing with the risks stemming from the behavior of private sector financial institutions may be the big focus for this coming weekend's G7 meeting in Washington," notes John Hardy at Saxo Bank.

"There are some calls to include currency issues on the agenda, but the G7 may once again have little to say on currencies, especially if the USD is not trading at new lows as the meeting gets under way.

"Even if it is trading at new lows, real intervention beyond verbal remarks is likely some way off," he concludes.

But the growing call for pan-global financial meddling looks sure to create a "Reverse Plaza Accord" sometime soon in the future. 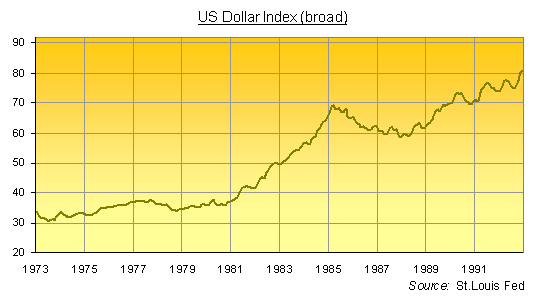 "In view of the present and prospective changes in fundamentals," said the communique issued on 22 Sept. 1985 by the G5 rich nations from the Plaza Hotel in New York, "some further orderly appreciation in the main non-Dollar currencies against the Dollar is desirable."

Together, therefore, the big guns of the global economy "[stood] ready to cooperate more closely to encourage this when to do so would be helpful."

Put another way – which was entirely the point – the G5 would start selling Dollars and buying non-US currencies to cut down the looming "Super Dollar" that towered over the global economy.

Those changing fundamentals, by the way, were that the United States had become a net debtor for the first time in seven decades. It's barely looked back ever since.

And as you can see above, the initial meddling did little to up-end the Dollar's true course. That required a switch in the market's view of the greenback. Government diktat – even from the five richest nations – failed to reverse the trend.

What might cause such "close cooperation" in applying this failed strategy – in reverse –today? Buying Dollars to increase its value might appeal as a way of aiding non-Dollar countries struggling to bear the costs of the Dollar's six-year decline. Who cares if history says it's unlikely to succeed?

In the five years ending Dec. 2003, for example, the Bank of Japan bought up $653 billion by selling the Yen – its own currency – on the open market. Suk-Joong Kim at the University of New South Wales, Australia, reckons that totaled almost 22% of all official reserves held around the world. The Bank of Japan then spent ¥14 trillion in 2004 trying to stop the US currency falling below ¥105 per Dollar.

The impact of that $140 billion on the Dollar/Yen exchange rate? The Dollar spent three whole months below the ¥105 mark in 2004, averaging ¥107 for the year as a whole.

"Despite the record size and frequency of the overall episode," found a research paper from the US Federal Reserve in 2005 "it is difficult to statistically distinguish the pattern of exchange rate movements on intervention days from that of all the [other] days in that particular subperiod, showing little effectiveness." 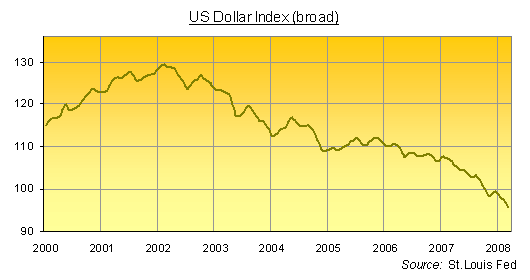 Of course, it's not in the United States' interest to see the Dollar go higher.

If you owed $9 trillion and you owned the printing press, wouldn't you be just fine with the idea of your debt being inflated away?

But "there is now agreement in the Eurozone about the fact that the depreciation of the Dollar is a problem," said an un-named French official to the International Herald Tribune back in December.

The finance wonks attending the next G7 meeting "have to pass the same message to the market," he went on. So far, however – if they've passed on any message at all – it's been ignored.

So might the Europeans and poor Asian and Middle Eastern economies which continue to pile up greenbacks and T-bonds every time they do business now want to see some kind of "Reverse Plaza" enacted – and soon! – to support their hoard of Dollars?

And with the International Monetary Fund standing ready to sell 400 tonnes of gold over the next couple of years, wouldn't it make a great window for the central banks of, say, Beijing and Japan, to switch a little of their foreign currency reserves away from the Dollar?

As the GFMS consultancy here in London pointed out this week, China holds barely 1% of its foreign currency reserves in gold at the moment. The rest, pretty much, is in Dollars. The Japanese do little better with a 2% gold holding. They just broke the $1 trillion-mark in USD, on the other hand.

If this swap – the West's gold for Asia's Dollars – comes off any time soon, Western investors won't simply have to stand by and watch this loss of hard currency as if helpless. They could join the big switch – out of Dollars and into truly hard currency – starting today if they wish.

After all, the International Monetary Fund (IMF) stands ready to sell 400 tonnes of gold. Or you could just wait for that communique – from the Beijing Plaza Hotel, perhaps? – in due course.