END_OF_DOCUMENT_TOKEN_TO_BE_REPLACED

Individually or together, erm, in pretty difficult and uncertain times, erm...

IN TIMES OF CRISIS, it's good to know there are strong men of action working non-stop to sort things out. Or so everyone seems to think.

Darling took charge of the Treasury last June, back when the previous finance minister – Gordon "Gold Sales" Brown – promoted himself to Prime Minister of the world's fourth largest economy.

It was right around the time Bear Stearns was closing two heavily-leveraged subprime mortgage hedge funds. The Bank of England's policy committee – appointed but not directed by the chancellor since Darling's party, New Labor, first came to power 10 years earlier – was just about to raise UK interest rates to 5.75%, a six-year high.

And UK house prices – offering less than one-third the square footage of the average US home, and with the smallest room sizes in Europe – were fast-approaching an all-time peak price of £184,191, some $350,000. 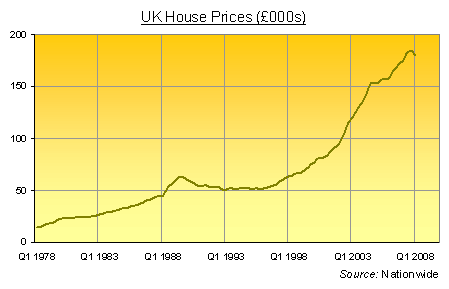 By Sept. 2007, however – barely three months later – the global banking crisis had spread onto Britain's high streets, creating the first open "banking run" in more than 130 years at Northern Rock, one of the nation's top five mortgage lenders.

Gold vs. the G7's Men of Action

"What you can do at an international level, I believe, is make sure we have better early warning systems," Darling told CNBC in a relaxed chat last week after the G-7 summit in Tokyo.

"[We can] make sure that, er, when it comes to, er, off-balance sheet arrangements, or when it comes to the way that credit reference...er, credit rating agencies behave, then there does need to be international co-operation.

With it so far?

"But of course," the chancellor went on, "most banking supervision is a matter for the individual countries concerned. The lesson that I think we need to draw, though, is you need to get the right regulatory systems, supervisory systems, and you've also got to make sure it works.

"Er, and, you know, the system is only as good as the people who are in it, and the key thing is, the prime responsibility for getting these things right lies with the company. It's for a bank to make sure that it knows what its employees are up to, it's for a bank to ensure it's got a business plan that works."

Got that? The woman from CNBC sure didn't. So she asked again – without bothering to jab a finger into his chest in the way that a BBC radio or television anchor would at home – quite what the British chancellor meant by international action.

"Individually – or together," he replied, "we need to do everything we can, right across the world, to get ourselves through what is a pretty difficult and uncertain time."

And with Alistair Darling running the UK finance ministry, the times ahead are only certain to become less pretty and more difficult. 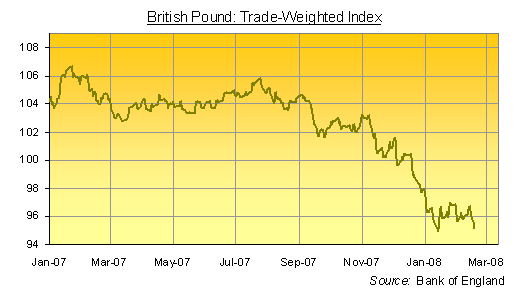 "Going forward, we will continue to watch developments closely and take appropriate actions, individually and collectively, in order to secure stability and growth in our economies," the G-7 statement announced.

Which sounds round about as clear and purposeful as Darling's ramblings to CNBC. Which in turn would suit us just fine here at BullionVault...if only the world's chief policy wonks would stick to talking gibberish, rather than actually trying to put it into practice.

Those sterling men Ben Bernanke and Hank Paulson of the United States are now committed – along with Japanese finance minister Fukushiro Nukaga, the two Jean-Claudes of the Eurozone (Juncker and Trichet), and assorted policy wonks from Canada, France, Germany and Italy, as well as Darling's own central banker, Mervyn King of the Bank of England – to the following course of action:

#1. Sell Gold
Following the famed success of the UK Treasury's gold sales – which saw 415 tonnes of gold sold right at the bottom of the monetary metal's 20-year bear market – the G-7 thinks now would be a good time for the International Monetary Fund (IMF) to swap Gold Bullion for "income bearing assets" such as US Treasury bonds. 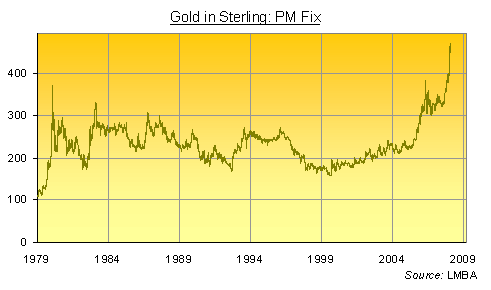 Or more immediately, in truth, the IMF – founded at the end of the Second World War – should now be bailed out so it can continue advising poor nations on how to run their budgets.

It's currently running an annual budget deficit of $400 million all of its own. And as our friend Julian Phillips of the Gold Forecaster notes, the IMF's gold doesn't actually belong to the IMF yet. The gold still belongs to the original sponsors of the Bretton Woods currency agreement, an agreement which collapsed in 1971 when US president Richard Nixon cut the Dollar free from what remained of the international Gold Standard.

But why let detail get in the way of bailing out a failed institution?

#2. If at First You Completely Screw Up...
Speaking to the Nikkei news agency just before the G-7 summit, "I believe you could make a good case...particularly with the European banks [that] the way they implemented Basel [the international accounting standards agreed in 1988] may have been partially or largely responsible for the conduit and SIV issues," said Hank Paulson.

Put another way, the former head of Goldman Sachs thinks the last set of pan-national banking rules threw the door open to precisely the "off-balance sheet" tomfoolery that's led us to the current world banking crisis.

But never let hard-won experience get in the way of cocking things up afresh. Right?

"Not only has liquidity dried up since summer," as Marine Cole reports for Finance Week, "making the funding of [special investment] vehicles more expensive, but with the upcoming application of Basel II capital rules next year, banks will have to start setting aside capital for off-balance-sheet vehicles, which they haven’t had to do under Basel I."

Basel II specifically demands that banks match their off-balance sheet risks with some level of funded provision. But the new rules – so complex that their implementation has been delayed by more than three years – still rely on "the same flawed approach of using internal risk models, credit rating agencies ratings and some band aid capital charges," notes Nouriel Roubini in his Global EconoMonitor blog.

So what to do? "There are a number of things that are being looked at," says Paulson, the poacher-turned-gamekeeper. "Rating agencies are one of them. We're looking at the mortgage underwriting, origination process in the US, looking at securitization, looking at evaluation and accounting issues and capital issues."

Nothing is safe, in other words, from the new slew of regulation about to hit the world's banking sector. Which will only increase fear and uncertainty on Wall Street and in the City – the perfect policy outcome now that banking confidence has shrunk to nothing.

#3. Bail Out Anything & Everything
Within days of returning from Tokyo, Alistair Darling finally took the only course of action he thought left open to him, and he nationalized the failed Northern Rock.

Shareholders are apoplectic – not least those shareholders who bought into the new People's Bank of Great Britain during its 95% plunge, hoping to turn a quick buck on the bounce.

If current investors aren't given full value when the Narodny Rock is re-privatized, "the British government's actions would amount to robbery under the law," wails Tim Congdon, an otherwise highly respected (and apparently sentient) economist. He pleads in the Financial Times that simply letting the Rock go under was never an option.

"Central banks exist for the purpose of preventing [banking] runs or, at any rate, ensuring that runs are met by lender-of-last-resort loans so the hurried liquidation of assets can be avoided."

Help me when I screw up, in short, but don't interfere when I think I've been clever. Which in the bigger scheme of things – underpinning the British public's faith in the security of its banking deposits – if just what nationalizing Narodny Rock will do for the UK finance industry as a whole.

"If US policymakers want to avoid a recession," writes David Bowers of Absolute Research Strategy – also in the Financial Times – "they need to ensure that America’s $750bn annual funding requirement from overseas is assured, and at a reasonable price."

How to keep money flowing into the US financial sector so that its very real-world trade deficit doesn't implode? "We believe they should move more rapidly to restore confidence in credit ratings and, thus, in securitised paper," says Bowers. "This could be done through more regulatory oversight of the ratings agencies.

"As a last resort, the government could even 'share' its credit rating with key private sector operators such as the [ailing bond insurance] monolines" – which is precisely what nationalizing Northern Rock achieves for the failed UK mortgage lender.

Expect ever-more government meddling in short, begged for by the Western world's finance industry and willingly supplied by policy-makers desperate to appear decisive.

And for as long as this circus keeps rolling on, you might want to keep Buying Gold as defense.

The men of action, after all, are trying to sell it once again.