END_OF_DOCUMENT_TOKEN_TO_BE_REPLACED

Stocks sink, bonds surge, and Gold puts in its best one-day jump ever...

NO DOUBT YOU SAW what the nationalization of AIG – the world's largest insurance group – did to Western stock markets.

But did you see what it did to government bonds? 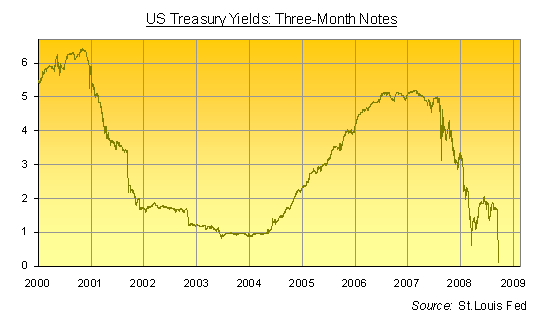 The yield offered by 3-month US Treasury bonds has sunk to pretty much zero as funds fled to safety, pushing T-bond prices higher.

The returns paid to new buyers of these "near-cash" promises fell at a record rate on Tuesday, before sinking at a fresh record pace yet again on Wednesday and reaching a near-absolute all-time low of 0.02%.

Two basis points above zero makes three-month money almost as useless to investors concerned only with income – rather than safety – as physical gold bullion.

Which might just explain what's happened in the gold market... 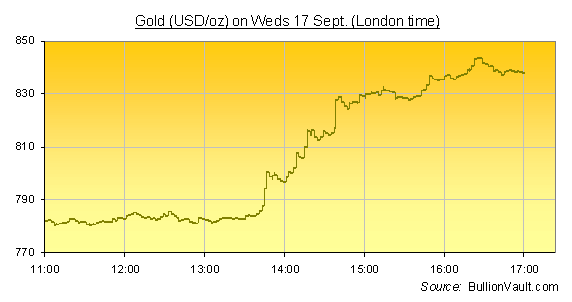 On any technical reading, the chart of Gold Prices since March – back when Bear Stearns collapsed – had looked pretty gruesome.

Sinking more than 25% from the top above $1,030 an ounce, gold fell right back to its long-term uptrend – starting in July 2005 – that saw prices in terms of all major currencies double and more.

But as an old lag from London's currency desks told me today, "The run on Wall Street could turn into a run on the Dollar any moment." And quite clearly, one or two other investors agreed at the Wall Street opening on Wednesday, forcing a 7.5% jump inside three hours.

The newswires called it "short covering", which is a handy explanation for any sudden jump you can't figure. Better yet, or so says the word here in London – center of the world's professional Gold Bullion market – one large player had an "option declaration" due today. After trying to push the price lower all morning by selling yet more, this player let the position go just as New York trading kicked off, forcing him to Buy Gold to close his big short at ever-rising prices.

Whatever that might prove (or otherwise) about Wall Street trying to suppress the price of gold, new buyers were only too happy to join the trade. There's certainly been heavy dealing in the Dec. '08 gold future, with the Comex reporting 10% more trading volume on Wednesday than there were outstanding contracts. But there's another, much quieter story in the derivatized market of gold futures and options.

It's shrunk dramatically since the big top of March '08... 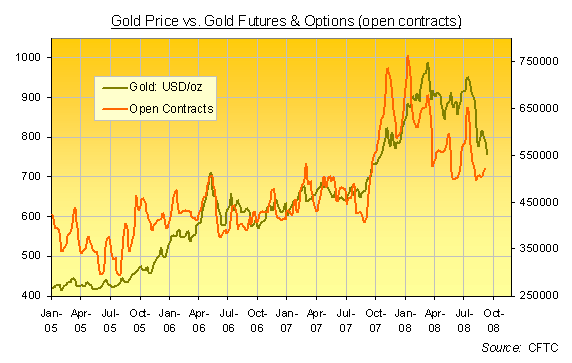 Physical Gold Bullion, on the other hand, has seen trading volumes surge at the retail level. In the professional wholesale market of large, 400-ounce bars, it's held at this decade's best levels all summer, despite the drop in gold prices and derivatives dealing.

That's created a Gold Coin shortage for smaller investors across North America and Europe. In the wholesale "spot market", daily clearing volumes have averaged 21 million ounces and more per day since last September, says the London Bullion Market Association. (You can probably multiply that figure by three to undo the netting effect of how LBMA member reports their data.)

Why this strong demand despite the 25% drop in Gold Prices? The metal "sits in a asset class all of its own for anyone with money to lose," as we wrote here at BullionVault back in the spring.

Not futures, options, exchange-traded funds or certificates – physical gold bullion, owned outright and free from the "counterparty risks" now so exposed by Lehman Bros.'s collapse. The world's very richest investors caught onto this aspect of physical gold's appeal back in summer '07, just as the credit crisis first began to destroy wealth.

"Largely as a result of the crisis in the credit markets, a number of high net worth individuals have invested in physical gold," confirmed Nikos Kavalis at the GFMS Gold Research consultancy to us by phone.

"In many cases, we've actually seen investors moving away from positions they already had in place, moving out of both unallocated accounts and gold derivatives, and into allocated metal." (If you don't know the difference between Allocated and Unallocated Gold, you'd better bone up if you're looking to buy gold today.)

Why Buy Gold against the very real threat of a financial collapse? First, the physical gold market centered in London is one of the deepest and most liquid capital markets in the world. Turning bullion into cash is easiest for investors dealing warranted gold bars. Kept in professional storage to retain maximum resale value, gold held in the form of these large 400-ounce bars also avoids wide dealing spreads and commission fees, too.

Repeated studies also prove gold's safe-haven appeal on the basis of its "non-correlation" with securitized assets, such as equities and bonds. Gold Prices move independently of the broader financial markets – neither together, nor in opposition. This lack of correlation makes gold a crucial component of any diversified portfolio.

Finally, physical Gold Bullion – provided that it is owned outright – is unique amongst tradable assets; because it's almost entirely devoid of counterparty risk. You'd be surprised how many investors, both private and professional, fail to realize the difference.

Owning the metal outright – whether as Gold Coins in your pocket or safer, cheaper and highly liquid large Gold Bars held securely in market-approved storage – takes you "off risk" with regards to the solvency of banks and brokerages. And it leaves you holding a highly liquid physical asset that's instantly valued just by checking the Gold Spot Price online.

Meantime, back in the market of paper-bond promises, "it's scary," said one fixed-income fund manager with forty-years' practise to Bloomberg today. "This is the worst it's ever been since I've been in the business.

"Nobody knows what's really going on. Systemic risk is here and there and everywhere."