END_OF_DOCUMENT_TOKEN_TO_BE_REPLACED

Absolutely nothing! Well, except 5,000 years of value exchange, non-correlation, and preserving wealth...
GOLD's VALUE is under attack, writes Miguel Perez-Santalla at BullionVault. The current market environment has led many in the press to question gold as an investment or an asset class.
There have been many pieces written pointing to the 2013 decline, now 27% on the year or 35% off the high of 2011. It would seem evenhanded to make this determination on this rather short view of the market. The question then exists, what is gold good for?
When looking at gold, one has to take a long-term view. Gold's position in the marketplace, both in the public domain and government function, has always come due to its primary purpose to humanity. That is as a guarantee of value.
This guarantee comes from the simple fact that gold is a constant. It does not change. Its value against other forms of money or investment does. But the underlying asset, the physical metal, does not change because of any socio-economic activities or global calamities.
The important thing to notice here is that gold finds its demand as a material commodity of beauty, function and form. It is a metal that has held sway as a form of money and barter throughout all of recorded history. It is one of the few constants to exist in the economy of the human animal. Because of its everlasting nature, and its ability to maintain its form uncorrupted, gold has withstood the test of time as an important vehicle for the transfer of value in our societies.
To analyze gold fully would fill miles of book-shelves. We would have to study each separate economic environment to determine how gold functioned versus other commodities or negotiable instruments. Yet the thing to remember is that gold has always been available in one form or another throughout hundreds if not thousands of different economic systems. To consider making a gold investment or not in our current environment, we must to take a long view of what really is a young marketplace.
In 1971 the president of the United States of America, Richard Nixon, closed the gold window at the US Treasury. This meant that the US Dollar was no longer convertible to gold. That freed the trade of gold in the US, with private individuals able to buy gold for investment from December 1974. This also meant that the other major currencies which were tied to the US Dollar through the Bretton Woods agreement were also now free-floating. So the world entered into a new experiment of unfunded money, often referred to as fiat currencies.
Fiat means " Let there be" in Latin. Governments today are the sole authority behind our money. Cut free from its use as currency, however, gold has since 1971 taken its price from the increasingly free market in bullion worldwide. Within 10 years of the end of Bretton Woods, private individuals across the West world could buy and sell gold. Ten years after that, the Indian government deregulated its gold market, while the collapse of the Soviet Union also spread freedom to trade gold in Russia and central Asia. Ten years later again, China began opening its gold market too.
Besides these market freedoms, taking a look at any single asset class since 1971 would also mean equating today with a period before so many changes in technology and advancements in communication. But on a 20-year horizon, US investors may want to consider gold and its value against two specific economic indicators. First there's the Gross Domestic Product (GDP) of the United States, the world's largest economy as a single country. Then there's the Dow Jones Industrial Average (DJIA), the widely followed and quoted index of US stock prices. 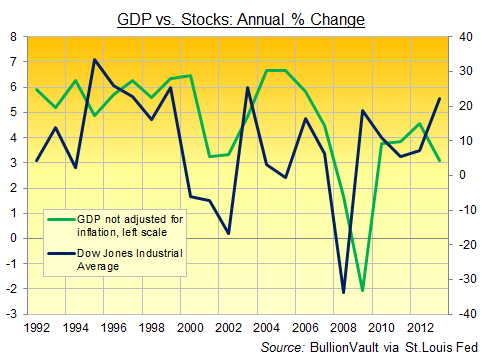 If you look at this graph of GDP and the Dow Jones Industrial Average you will note that they move almost in tandem. Of course there are exceptions, but it is close, and with the Dow typically pointing where the economy is headed. The numbers represent their performance on an annualized basis up or down percentage-wise.
The following chart shows the change in gold prices over the same period, again by percentage. You will note that gold has moved in the opposite direction in most cases. So gold was equally fulfilling its role as financial insurance when the stock market performed well. Because gold did not. 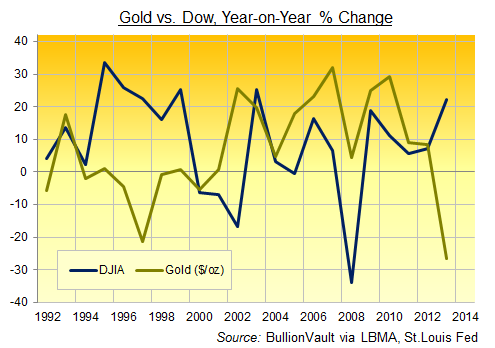 What these graphs clearly indicate is that gold has served its primary long-term function as a store of value when other things fail. When major concerns about the global economy come into play gold is one major tradable asset which has held up under pressure. Imagine, while looking at the 20-year chart, that you were one of the investors who was wise enough to keep a 5% to 10% position of their portfolio in gold and build it up over that time horizon. They received the rewards, and reassurance, of the conservative investor. Because their insurance program paid off.
While you consider this, ponder on how the stock market is regaining much of its momentum on the back of Quantitative Easing. This has profoundly changed the economic environment. This current central bank action, which is an experiment, cannot go on forever. How will the US economy react as its economic stimulus, an addictive drug, is withdrawn or tapered? What withdrawal pains will be felt in the stock market and global economies? Do you as an investor want to be caught without any provisions? 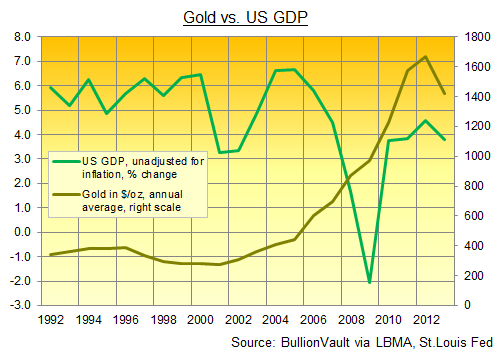 Since the tech-stock boom turned into a crash during 2000-2003, we've had the building mortgage crisis of 2005-2007, the collapse of Lehmans (and the near-collapse of everything else) in 2008, the start of the Eurozone crisis in 2010, and the US debt downgrade of summer 2011.
Gold is now down significantly this year, 2013. But this does not negate gold's value or use, and like any insurance policy the best time to participate is before you need it. Gold's role as what economists call a non-correlated asset – moving free of other major indicators and investment prices – serves to protect rather than to enrich.
Of course, this doesn't mean there are not trading opportunities for short term players as well. Yet making money this way is possible on a daily basis it is not the primary purpose of gold ownership. For instance Kraft Foods (KRFT). Its value as a stock is derived from the products Kraft sells and distributes and not the price action of the stock. Still there are those that trade it for the latter.
Such short-term traders have enjoyed plenty of action in gold prices in 2013. But this year's price drop is only one page of a very long history, and only one page of the current chapter, too. Gold's timeless value, a constant for humanity worldwide, remains unaffected.