END_OF_DOCUMENT_TOKEN_TO_BE_REPLACED

Gold sold by Gordon Brown's UK Treasury was already out on loan, ready for front-running...
FIFTEEN YEARS ago today, the UK government announced it would sell 415 of the country's 715 tonnes in gold reserves, writes Adrian Ash at BullionVault.
Although everyone else in Europe was at it, that decision still looked crazy enough at the time. Gold prices were at 20-year lows. No one had prepared the ground for Britain to join Switzerland, the Netherlands and the rest. The market was sure to take fright. But run by New Labour, the UK government went further, giving the market two months' notice before the sales started.
That told the market to expect lower prices still, forcing prices lower straight away. By the time the UK's three-year sales programme began in July 1999, prices had dropped 10%.
But that still wasn't enough for Gordon Brown's ham-fisted strategy, however. The then chancellor, the man who would be prime minister during the UK banking crash of 2007-2010...reaping the whirlwind...in fact sold gold which the Bank of England already had out on loan.
That enabled speculators wanting to bet on lower prices...caused by the UK's sudden, clunking sales announcement...to borrow gold, sell it, and then buy it back lower down, before returning metal to the Bank of England and banking a profit.
Yes, really.

We've written about this before (and hat-tipped the long-standing BullionVault user who alerted us in 2009), not that anyone much noticed. We've also reported just how different the global gold market looks today from its approach to the millennium.
Here on 7 May 2014, the UK government doesn't have any gold out on loan (or so it said at last count), and the current administration clearly plans to keep hold of the nation's remaining reserves. So do the rest of Western Europe's central banks. But that might, come September, threaten a key plank of the bull market which Gordon Brown inadvertently started.
Horrified and dismayed by the UK's amateur dramatics, and its impact on prices, Europe's other central banks got together to agree annual sales limits for the next half-decade. The first Central Bank Gold Agreement in fact saw them sell more gold by September 2004 than they'd sold during the previous 5 years. But having certainty about future central bank sales (and having the Bank of England signed up, too) had put a floor under the gold price. Indeed, the market absorbed the 2,000 tonnes sold under CBGA1 at steadily rising prices.
Pleased with their work, and still keen to reduce their "legacy" holdings of gold...leftover from the post-WWII scramble to take gold instead of Dollars as payment from the US...the central banks signed a second 5-year agreement, raising their joint limit to 500 tonnes per year. This time they sold a bit less however, fewer than 1,900 tonnes rather than the total ceiling of 2,500 agreed in September 2004. Because half-way through CBGA2, a little event now called the global financial crisis got in the way. Gold prices shot higher, but central bank sales were never about maximizing profits anyway. And now gold sales looked as daft to politicians as they had to everyone else.
So the third agreement, signed in September 2009, cut the annual limit back to 400 tonnes. But to date, and with only 4 months of that 5-year deal left to run, the signatories have sold barely 10% of their 2,000 ceiling. Renewing the agreement again might seem pointless come the autumn. What's more, letting the CBGA lapse might allow central banks who want to raise cash fast to sell gold without giving notice through the CBGA framework.
Gold is a very deep, liquid market. Idiot governments wanting to swap rare, tangible bullion for other governments' paper I.O.U.s...the stated aim and outcome of the UK sales announced 15 years ago today...might see the end of the CBGA as their chance.
If so, aggressive traders could see lower prices ahead. But irony...like history...says that might instead mark the bottom of this lull. Gold today trades at almost 5 times the average price achieved by Gordon Brown's sales. And while the CBGA gave the market certainty over European sales, it never spoke to the emerging world's huge new demand for physical gold reserves. Nor did it stem the return of private hands as the largest segment of gold ownership, now back to pre-WWI levels. 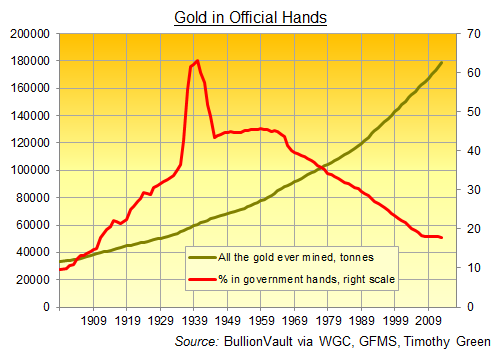 The 20th century's dash to hoard gold may come, in time, to look like an aberration. Certainly the pre-1900 gold standard didn't require large stockpiles of government gold. Free trade and settlement with bullion, or notes that could be exchanged for gold, was enough. But belligerent states throughout history have hoarded precious metals, ready to pay troops and buy supplies in foreign lands where their own domestic money – whether paper or social I.O.U.s – won't be trusted.
One hundred years ago, it was the warfare state which demanded control over the monetary base. Gordon Brown's faith in cross-border institutions like the IMF to resolve poverty and other world problems looks touching, but naive. Fighting hardest against the trend to private gold ownership since the UK sold more than half its reserves at the turn of the century is Russia. China is close behind, even without admitting the highly likely additions it's yet to report. Without buying an ounce since the end of WWII, the US remains the No.1 holder.