END_OF_DOCUMENT_TOKEN_TO_BE_REPLACED

Why do central banks hold gold? Because of the trust and independence it provides...
"FAITH and RELIGION," said Edel Tully of UBS, the Swiss investment and bullion bank.
"Those were key themes," she said, summing up this year's LBMA conference last Tuesday evening, writes Adrian Ash at BullionVault.
We could hardly ignore those issues, meeting in the hills just west of Rome with 700 other delegates for the London Bullion Market Association's annual jolly. From Monday night's dinner on top of Monte Mario, the dome of St.Peter's dominated the view. And any asset which doesn't pay an income, and which has fallen in price for more than two years, must look like a "hold-n-hope" investment based more on prayer than cold logic.
Instead of "faith and religion" however, we had already scribbled down "trust and independence" as the LBMA conference's key themes. Because where Dr.Tully heard whispers of eternal beliefs – here in God (or gods), there in gold – we nearly had to cover our ears from all-too worldly shouting over safety and sovereignty, confidence and freedom.
Gold forms a triangle with these ideas throughout history. Trust and independence met gold again last week in Rome. Because today's oh-so-modern mob of taxpayers, government officials, lenders, traders, high priests and the rest still need to trust each other but also demand independence as they skip through the forum. And as the oh-so-sociable LBMA conference showed, the way that gold and silver are treated speaks to people's trust in each other, and their freedom to act as they choose.
Take central bankers. They tend to sell gold when it's cheap, and buy or hold when it's not. "This," as Blackrock's Terence Keeley rightly noted to the LBMA conference, "is no way to diversify your portfolio." 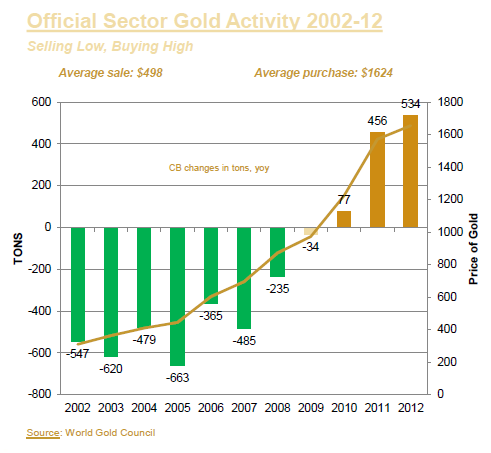 But central-bank gold is about much more than smoothing returns or improving your efficient frontier. It's about independence, even if that independence puts the central bank's trust in other institutions in doubt. Institutions such as, say, the monetary union you're publicly working to deepen and develop.
Not that any of the six current or former central bankers addressing the LBMA conference last week dared say any such thing. Nothing too blatant was given away. But you didn't need rolling translation to hear what was said.
"Trust is a central bank's most valuable asset," announced keynote speaker Salvatore Rossi of the Banca d'Italia. Only just behind that, he seemed to suggest, gold came a close second. And given Italy's recent history with gold, it certainly seems to support the central bank's trust amongst the general public. Because as Rossi said, gold so plainly supports the bank's independence from government.
"I don't need to remind you of gold's unique role in central bank reserves," said Rossi, nevertheless reminding the 700-odd delegates to the LBMA's two-day meeting in Rome that gold is "unique amongst risk assets" because it is not "issued" by anyone. So it carries no liability and needs no counterparty for its inherent value.
Just as importantly, the central bank of Italy's director general also pointed to "psychological reasons" for gold's key role. So did Clemens Werner of the Bundesbank, the world's second-heaviest gold owner behind the United States. More than 40 years after the final gasp of the Gold Standard and eight decades after that monetary system really hit the skids, he named "confidence" and "precaution" as the big reasons for continuing to hold gold.
Because as Italy's Rossi went on in his speech, gold "enhances resilience" in the central bank's reserves overall, typically rising when other risk assets plunge. More notably, gold "underpins the independence of the central bank" from government. Quite how, Rossi didn't say. But with Silvio Berlusconi trying to destroy Italy's government just a few minutes cab-ride away, the point was plain enough if you knew the history.
Il Cavaliere came after the Banca d'Italia's gold in 2009. He was told where to go. The central bank's big friends at the European Central Bank then told Berlusconi where to go, too. Trying to tax the central bank's unrealized profits on gold was illegal under the Euro treaty, breaching line after line of the critical "independence" from government which national central banks must retain. Italian central-bank governor Mario Draghi has since moved into the job of ECB chief. So his stand against Berlusconi's failed gold bullion tax grab looks a good template for how the ECB, and the biggest gold-owning central banks of the Eurosystem, might view their gold reserves today.
Most definitely, none of Germany or Italy's gold is up for sale this year. Alexandre Gautier said the same of France's hoard. But then again, the Banque de France said that in the late 1990s, only to break ranks and take advantage of rising prices in the early Noughties. Gautier also spoke last week about trading and lending (this was a business conference, after all), but only to say the former is now very limited, while the latter is off the table. Not until gold borrowers come up with collateral. Which is unlikely but necessary now that – compared with 10 or 15 years ago, when lending European central-bank gold was all the rage (as was selling it, at least outside Rome and Frankfurt) – "the environment is totally different. I'm not sure it could be acceptable for a 1-year loan without collateral."
Which brings us back to trust... as we see in part 2 here...