END_OF_DOCUMENT_TOKEN_TO_BE_REPLACED

Lenin would be proud. Households and investors are flinging gold into the sewers...
QUITE literally, gold is being flushed into the sewers, writes Adrian Ash at BullionVault.
That's according to a study by Cardiff University's School of Earth & Social Sciences.
The sludge burned out of UK water as it heads through recycling is "consistently high in gold content", according to Dr Hazel Prichard.
Back below $1070 per ounce for the first time in nearly 6 years, gold's market price is also in the toilet for City traders and US fund managers too.
Other things, in contrast, have rarely looked better. Which tends to be the way other asset classes move as gold makes a prolonged dive.
UK house prices, for instance, have never been higher according to new government data.
The US stock market is killing gold too says this natty little video from Bloomberg – charting the simple Dow/Gold Ratio – and concluding that human ingenuity is beating out the dead lump of metal.
Well maybe. Listed US-business owners can now buy 3 times as much gold by selling their stock as they could – at least according to the Dow/Gold Ratio – at the depths of the financial crisis. Otherwise known as the peak of the decade-long gold bull market. 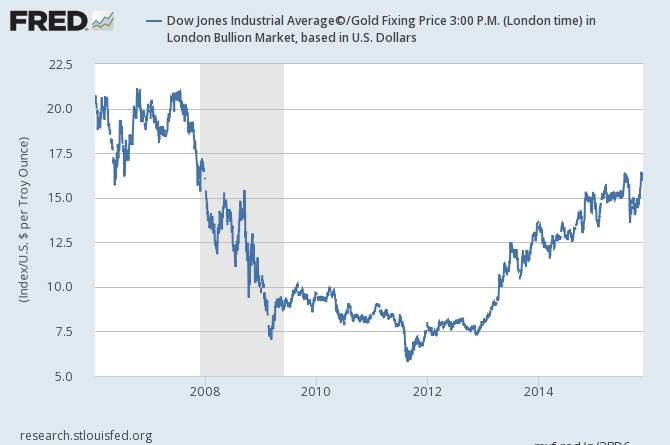 Contra Bloomberg however, you could look at the present as the result of the past...rather than as a guide to the future.
UK housing investors, for instance, face a slowing economy...plus declining inflows from those legendary "foreign" buyers...plus a jump in supply towards meeting the perennial claims of a shortage.
The US stock market's 2015 gains, meantime, show the worst "breadth" since the DotCom Bust according to Goldman Sachs analysts.
Just 5 mega-stocks account for the entire advance in the S&P500 index so far in 2015. The other 495 shares have lost value or flat-lined.
Still, UK estate agents are bullish on houses...of course...and Goldmans are sanguine on stocks. Stay the course in equities, the investment bankers advise. Nothing to worry about.
Well maybe again. Or maybe the fresh plunge in copper, crude oil, silver and other industrially useful stuff says there's trouble ahead for industry...and thus wages, demand, spending and investment...as well as for famously useless gold.
The huge overhang in US corporate debt might make equity bulls feel a little uneasy too. Non-financial firms borrowed $1.5 billion in 1 week alone, says the St.Louis Fed.
But hey, human ingenuity has been beating gold flat out. So like maybe, for US corporations, humanity can now find a way to service and repay record-high debts even as incomes slide.
Y'know...just like households and banks failed to do during the last financial crisis.
For the meantime, Lenin would be proud. Instead of the Bolshevik Russian's plan for public lavatories built of the stuff, late degenerate capitalism is flushing gold down the pan. Or like the New York Times asked in 1999 – the last time gold was this hated and disdained both by price and money-manager sentiment, and just before it began a 12-year bull market – " Who needs gold when you've got central bankers?"