END_OF_DOCUMENT_TOKEN_TO_BE_REPLACED

Wearing its greatest debt burden since WWII, the UK government can now borrow for 10 years at less than 1.9% per annum. The US Treasury is paying 2.9% per annum on 30-year debt.

Does anyone really expect a yield of less than 3% to beat inflation between here and 2042...?

Yet the price of gold – the anti-debt – keeps falling, and it keeps falling despite the imminent failure of Greece's Euro membership and the looming collapse of Europe's banking system. Some €700m per day is being pulled from Greek banks. Global stock markets have fallen over 7% already this month, the broad commodity markets have fallen for 10 out of 11 days, and crude oil is trading at a 6-month low, down 15% from February.

But the distinct differences of gold – un-inflatable, economically useless (relatively speaking) incorruptible gold, with its zero credit risk and 5,000 years of monetary use – count for nothing. In Dollar and Sterling terms, it's now back where it started last summer's big move. 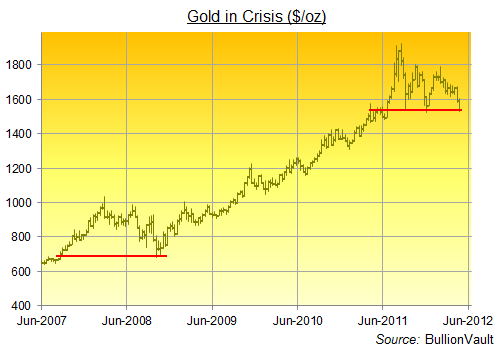 That's precisely what happened in late 2008, when the collapse of Lehman Bros. – and the missed opportunity to let every other over-leveraged investment fraud go bust as well – drove equities, commodities and gold sharply lower.

By mid-October 2008, gold had re-traced the entire surge that started with Bear Stearns' hedge-fund failures of mid-2007, running to the peak above $1000 per ounce when Bear Stearns itself failed into the loving embrace of J.P.Morgan the following March.

Here again in 2011-2012, the crisis proved good for gold at first, but the whole move has been unwound as global credit deflation sucked the air out of Gold Futures and options, and wipe-out losses in other assets forced even true believers to quit their positions. 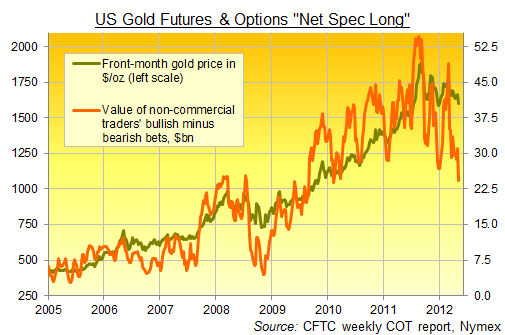 Gold Prices have the potential to recover, says a UBS analyst to Bloomberg TV. We don't doubt he's right. We just doubt gold's immediate potential given the overwhelming bullishness of every tomfool able to voice his opinion in public.

"Last time we talked, last September or October, you asked what I thought, and I was bullish at $1800," said one MBA with the certainty of a 12-year old to Business Insider a week ago. "Now it's $1660, and I'm still bullish. I'm more bullish than ever."

Good grief! Just think how bullish he must be now gold has sunk another $120. "When all the experts and forecasts agree, something else is going to happen," says David Rosenberg, previously chief economist at Merrill Lynch, now chief economist and investment strategist at Gluskin Sheff and – ummm – an expert by any measure. But what happens when all the fools agree with the experts? It most likely ain't pretty.

Put another way, gold has been getting "a thorough, undeserved smacking," as our friend Ross Norman at Sharps Pixley wrote last week. But c'mon Ross, what's undeserved about it?

Gold has risen for 11 years straight, gaining through boom and bust and boom again, beating all other tradable assets (now including silver) hands down and even being recognized by 1-in-4 Americans as the best place to keep your money (formerly 1-in-3, but who's counting besides us?).

The best place up until now, that is. They really don't know where the best place is from here. No one does. Hence the fun.

Longer-term, of course, gold's low of Oct. 2008 proved a stand-out buying opportunity. Difference was that physical gold demand – at the lows of the 33% price drop top-to-bottom in 2008 – was massive. Lines formed outside coin shops, Gold ETF holdings surged, BullionVault struggled to cope with demand, and financial journalists couldn't write enough about the safe-haven allure of the yellow metal.

Today, in contrast, demand is fair but unspectacular. Hell, the financial press in Spain is telling people "gold is a risky asset" that has "lost its luster"! Maybe the crisis isn't clear enough. Maybe those people who would Buy Gold in a crisis already did, four years ago if not last summer, when the Eurozone crisis ran into the US debt downgrade ran into the torching of England's towns and city centers.

Or maybe things have to get very much worse again to revive the lesson of 2007-2009. The lesson that banks do go bankrupt. Debt investments do evaporate. Central banks will stop at nothing to stem a credit deflation.