END_OF_DOCUMENT_TOKEN_TO_BE_REPLACED

Gold/Silver ratio rises when money gets tight. And it's rising right now...
SOMETHING odd is happening to the Gold/Silver Ratio, writes Adrian Ash at BullionVault.
This ratio measures the relative strength of gold vs. silver. It simply divides the current gold price by the current silver price.
So the Gold/Silver Ratio shows how many ounces of silver you could swap for 1 ounce of gold...if you could find someone willing to take the other side of the trade cost-free. (You'll pay a maximum of 1.0% to do it on Bullionvault's tariff. Cheaper than any comparable service.)
The ratio is useful, because gold and silver prices so often go in the same direction (73% of the time since 1968 on a daily basis. Gold and silver have diverged 7 days running only once). But the size of their movements over time varies wildly, as shown by the ratio.
Now, the Gold/Silver Ratio has been rising sharply over the last 3 weeks, jumping back towards January's 6-month highs. Which doesn't quite fit the rising gold price. Indeed, some technical analysts would say it was "non-confirmation" of gold's rising trend.
Why? Because gold and silver prices are usually joined at the hip. Yet silver is failing to go markedly higher as gold jumps through what lots of technicians called "resistance" at last October's high of $1361. 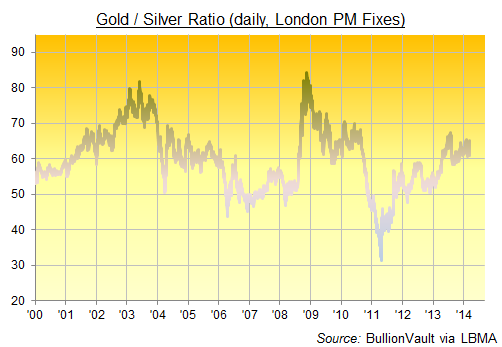 Nothing untoward. Not yet. The 21st century to date has seen one ounce of gold equal between 50 and 70 ounces of silver in the main. The Gold/Silver Ratio's extremes on either side have swiftly reversed. This week's 2-month high of 65 shouldn't worry anyone beyond hedge funds trying to play cute, shorting gold and buying silver futures or options on credit.
But look at what the ratio suggests about the broader macro background. Because the ratio tends to fall – meaning that silver is gaining relative value – when strong monetary inflation is boosting the feelgood factor of the rich developed world, most obviously the United States.
The Federal Reserve under Alan Greenspan, for instance. (You remember him. Not as tall as his predecessor. Spoke in riddles. Saved the world. Self-promoting like an Oscars night selfie.) His reflation campaign as the first Tech Stock Bubble collapsed, eating the credit inflation of stockbrokers' margin, saw the Fed  slash US Dollar rates to what was then an historic low of 1.0% in 2003. That unleashed a housing bubble which coincided with a surge in US and global equities, and a prolonged fall in the Gold/Silver Ratio.
That fall swiftly reversed alongside everything else (except the gold price) amid the deflationary shock of Lehmans' collapse in September 2008. Silver then regained value, relative to gold, in the post-Lehmans world of zero rates and QE money printing.
But from the 30-year low hit on 28 April 2011...when one ounce of gold equated to fewer than 32 ounces of silver...the Gold/Silver Ratio has risen. So has the real rate of interest on US bonds. Despite the promise of "whatever it takes" to save the Euro's currency union, so has the gnawing threat of Japan-style deflation in the Eurozone. And starting in spring 2013, so has something like monetary restraint at the US Fed, with QE tapering finally starting in December.
So our thesis? For today at least, it's that silver rises faster than gold when money is becoming more plentiful, and fast.
How come? Both gold and silver have long histories of monetary use. Five thousand years and more, in fact. But it's fair to say this use was lost to silver before the First World War, and unequivocally since China abandoned its silver standard just ahead of WWII. Yes, gold was cut free from the monetary system in 1971. Yes, it had already been parked in central-bank vaults since the 1930s, just as useless to day-to-day trade as if James Bond villain Auric Goldfinger succeeded in irradiating the giant US reserves, as in the 1962 film. (In the 1959 book Goldfinger wanted to steal Fort Knox's hoard.) But those central-bank holdings remain with us today, albeit re-arranged a little between West and East. Proving gold's long-run appeal to long-run planners and managers.
Gold has also retained its "store of value" function for private households as well – appealing as much today to Asian jewelry buyers lacking formal banking or investment networks as to Western coin hoarders fearing evil days such as Y2K. Yet silver became polarized between industrial use and financial speculation.
Gold doesn't need monetary inflation to rise in price. The Dollar and gold have risen together so far this month, for instance. The Japanese Yen is also rising. Again, that suggests a tightening of money liquidity worldwide, with investors closing their loans in zero-cost Yen after selling the "risk-friendly" assets they'd bought with that cash.
Silver is very much an inflation play, in contrast. But gold can attract capital even when fear of deflation grows. And those fears are growing right now, as the Gold/Silver Ratio suggests.
The European Central Bank, says Reuters, "is ready to use non-standard tools to deliver stable prices." That's code for QE money-creation, the first and only resort of policymakers terrified of a deflationary spiral.
"The risk of deflation, especially in the Eurozone, definitely exists," agrees IMF chief economist Olivier Blanchard, interviewed by Handelsblatt in Germany. Deflation means falling prices, typically following a credit bubble. Consumers delay spending, hurting business and tax receipts. First because they expect prices to fall again in the future, but second because their incomes are likely falling as well.
See Japan since 1990, or Greece and Ireland since 2009. Besides the immediate threat of a banking system collapse, fear of such "lost decades" is what led the US Fed and other central banks to slash interest rates to zero...and to start printing QE money...five years ago. And so, by extension, it was the threat of deflation which led some big-name fund managers to buy gold...betting on monetary inflation as the top policy response to any chance of consumer prices falling. But it was silver which really shot higher.
Silver may well get another inflationary boom in 2014, we guess. Thanks oddly to the threat of a silver-sapping deflation.