END_OF_DOCUMENT_TOKEN_TO_BE_REPLACED

Price spikes see net selling, fewest 1st-timers in 5 years...
GOLD and INVESTING started 2022 with the least happy New Year since 2016, writes Adrian Ash at BullionVault.
That was the last time that BullionVault – the world-leading online and smartphone platform for physical precious metals, now caring for $3.7 billion (£2.7bn) of investment-grade bullion for over 100,000 users, 89% of whom live in Western Europe or North America – saw fewer first-time investors than last month.
It was also marked  the end of gold's bear market following its decade-long gains amid the Tech Stock Crash and global financial crisis.
January 2022 in contrast saw gold trade above its average price of 2021, itself a new annual record. Gold has only traded higher than last month in one previous January.
But even with inflation at 3- and 4-decade highs, world stock markets falling hardest since the Covid Crash, and the very real threat of a hot war between Nato and Russia in Ukraine, gold's higher prices invited profit-taking while also deterring new buyers.
So net-net, investors in gold turned sellers last month, liquidating 0.4% of their New Year's Day stockpile.
Silver's price action was – as always – more dramatic still, and its investing retreat did likewise. BullionVault users sold over 23 tonnes more than they bought as a group in January, liquidating 1.8% of their record-high New Year's Day holdings.
Why was the appeal of physical bullion so dimmed at the start of 2022?
Those high prices are partly to blame, plus strong volatility. Gold swung 4.0% low-to-high last month, and rose 1.7% on its month-average Dollar price. Silver swung 3 times faster low-to-high, offering up to 12.4% gains for traders accessing wholesale prices direct without having to pay VAT sales tax. With dealing costs on BullionVault running as low as 0.05%, why not take a profit?
FOMO in other assets may be another factor, with the sudden reversal in US stocks and cryptocurrencies tempting investors who missed out on the pandemic's massive gains.
More clearly, inflation has yet to worry the financial markets more than they're spooked by central banks threatening to raise interest rates faster and sooner, and that – potentially – raises the opportunity cost of holding non-yielding gold or silver.
But even if the US Fed hikes 4 or 5 times in 2022, that would leave cash rates well below the Fed's own 2.0% per year target for US inflation, and even the Fed itself expects inflation to run above target both this year and next, eating yet more of the Dollar's real purchasing power.
Moreover, while the new consensus on rates has driven steep falls in tech and crypto, precious metals have held firm in comparison, and selling remains marginal.
That suggests strong confidence among existing gold and silver investors, not least the record numbers who bought for the first time during the Covid pandemic, in bullion's role as portfolio insurance. 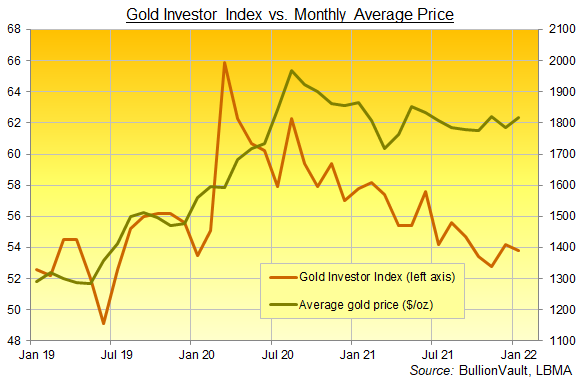 While the number of people starting or increasing their gold holdings using BullionVault rose 3.2% in January from December's count, the number of sellers jumped by 33.6% as existing owners took advantage of last month's 4.0% low-to-high price swing and its 1.7% month-average gain.
Together that pushed the Gold Investor Index – a unique measure of private household behaviour in physical bullion – down to 53.8 from November's rally to 54.2.
A reading above 50.0 signals more buyers than sellers by number. The index hit a 10-year high of 65.9 when the Covid Crisis began in March 2020. 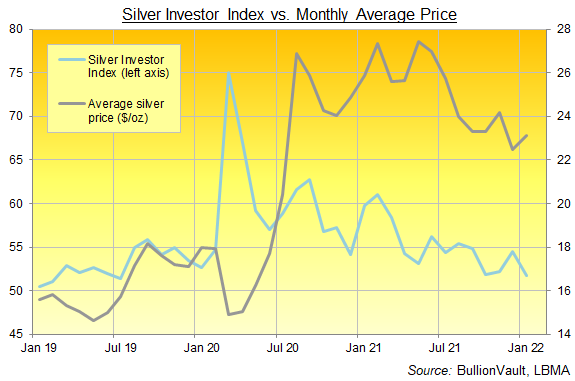 Silver's price in Dollars jumped 3 times faster than gold low-to-high in January, swinging by 12.4% and spurring heavy liquidation by BullionVault users as the precious metal rose 2.9% on its month-average price.
Buyers still outnumbered sellers, but the Silver Investor Index fell to a 30-month low of 51.7 – its weakest reading since July 2019 – as January's price spike saw the number of buyers fall 21.7% from December's figure while the number of sellers leapt 48.8%.
But in terms of weight, silver marked the anniversary of 2021's near-record New Year investment demand – driven by the #silversqueeze movement on Reddit and other social media – with the heaviest net selling since BullionVault began offering the industrially useful precious metal to its users in 2009, cutting total holdings to 1,228 tonnes.
Amidst this liquidation, last month saw a distinct lull in new buyers. January typically sees a bump in the number of people buying precious metals for the first time, wanting to spread their risk after reviewing their investments at New Year. Yet despite the stock market falling, plus the worst inflation since the 1990s or even '80s, and the clear threat of a hot war in Europe, New Year 2022 marked the quietest January for new interest in precious metals since 2016 – back when gold prices bottomed after a 4-year bear market – and it was the first time since New Year 2012 that January saw fewer first-time investors than the preceding December had done.
Over the previous decade, January's count of first-time precious-metal buyers beat each year's monthly average 8 times, accounting for 10.8% of first-time investors in total, more than any other month.
Bottom line? The surging cost of living continues to support gold and silver prices, as does the nervousness in global stock markets – let alone the tensions between Moscow, Kiev and Washington – because bullion holders are only marginal sellers at these levels. Yes, that might well change if prices rise steeply from here, but what fresh financial or political news would that need, and what would be the response among investors yet to buy gold or silver for the first time?
They're currently the least interested, for a start to the year, since the precious metals hit rock-bottom at the end of their post-financial crisis bear market.
Attachments: