END_OF_DOCUMENT_TOKEN_TO_BE_REPLACED

THIS WEEK's gains in precious metals prices accelerated Wednesday lunchtime in London's bullion market, taking gold, silver and platinum to their highest in 7 days as new US inflation data confirmed that the cost of living in the world's largest economy is rising at 7.0% per year, the worst since the deep recession of 1982.
With the US central bank under Jerome Powell still holdings its key Fed Funds rate at 0.1%, that puts real interest rates more deeply negative than anytime on modern records. 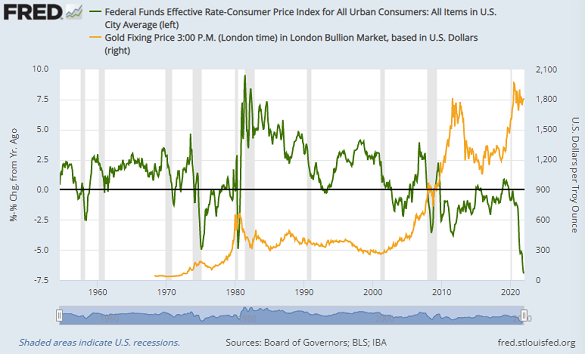 In contrast to the equity crash of 4 decades ago, global stock markets rose today, with New York futures pointing higher for a 3rd session as longer-term interest rates slipped back from multi-month highs in the bond market even as US crude oil rose towards October's 7-year peak.
Energy and used cars led December's inflation in the Consumer Price Index, the US Bureau of Labor Statistics said, jumping 29.3% and 37.3% per year respectively despite gasoline and fuel oil costs edging back from November as the global microchip shortage continued to curb production of new vehicles, leaving consumers to seek second-hand models.
Gold prices spiked to $1825 per ounce on today's inflation news, joined by silver and platinum at the highest since Wednesday last week at $22.99 and $985 before they also slipped back.
"High inflation is a severe threat to achieving maximum employment," said US central-bank chief Jerome Powell to Congress yesterday, seeking re-confirmation as chairman of the Federal Reserve and repeating that 'price stability' is one half of the Fed's dual mandate.
Cleveland Fed president Loretta Mester – a voting member of the US monetary policy committee this year – meantime said in a speech that she would back the market's current forecast of a Fed rate hike in March plus 3 more in 2022.
But the Fed has now held its key interest rate between zero and 0.25% since March 2020, when the Covid Crisis spurred a crash in the stock market, economic activity and industrial commodity prices.
Bottoming at barely 0.1% per year 2 months later, CPI inflation has since accelerated at the quickest pace since the 1973-74 global oil crisis. 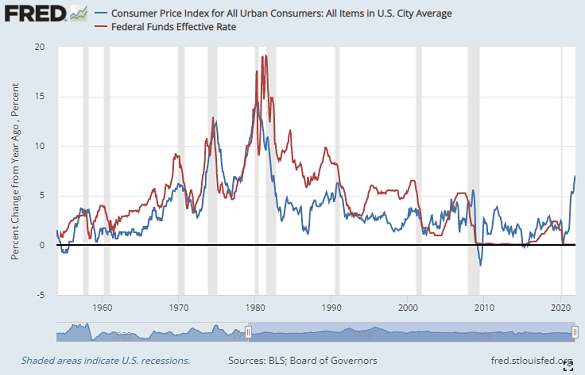 "Gold and plenty of other commodities are simply pricing in that the Fed has a lot of catching up to do versus inflation trends," says one bullion trading desk in a note, pointing to crude oil rising through $81 per barrel and copper up through $9,700 per ton.
"Hawkish talk and tapering has been too little, too late."
While today's headline inflation data matched analyst forecasts of 7.0% per year, the so-called 'core' index of US consumer prices jumped faster than expected, rising 5.5% per year when energy and food costs are excluded with the sharpest increase since New Year 1991.
A dip in the Dollar's FX value on the foreign exchange markets today saw gold prices edge lower for British Pound investors, slipping £6 per ounce from yesterday's near 1-week high of £1337 as UK Prime Minister Boris Johnson confessed and apologized to Parliament for attending a rules-breaking party in the garden of his home, 10 Downing Street, during the country's first Covid lockdown.
Euro gold prices meantime slipped back below €1600 per ounce despite longer-term interest rates across the 19-nation currency union joining US and UK bond yields with a retreat.
Before accounting for inflation, now running at 3-decade highs above 5% per annum, that pulled Germany's 10-year borrowing costs back to minus 0.07% after it came within 4 basis points of zero for the first time since spring 2019.
"The medium-term price outlook is exceptionally uncertain," said Germany's new central bank chief Joachim Nagel on Tuesday at his inauguration as Bundesbank president.
Replacing Jens Weidman on the European Central Bank's policy team – the 'hawk' who saw the ECB embark on unprecedented QE bond buying to support weaker Eurozone states plus sub-zero overnight interest rates – "I currently see a greater risk that the inflation rate could remain high for longer than currently expected," said Nagel.
"In any case, monetary policy must be on guard."
Powell's comments to Congress meantime "defied the hawkish commentary of others on the Fed’s rate-setting committee," reckons one market strategist, in that he suggested US Fed bond holdings won't be sold off for some months after QE tapering finally reduces the acquisition of new assets to zero in March.