END_OF_DOCUMENT_TOKEN_TO_BE_REPLACED

Gold's purchasing power strongest since 1970 vs. inflation...
GOLD or TECH STOCKS? asks Adrian at BullionVault.
Twenty years ago, the DotCom Bubble peaked and crashed. Right alongside, gold prices finally stirred after 2 decades of falling...
...starting what has gone on to prove a long, if volatile uptrend...
...making gold the very best performing asset class of the 21st Century to date.
Back at Millennium's turn, that see-saw made sense.
Tech stocks marked the apogee of human ingenuity and progress. Their ensuing collapse marked the return of history...punching a hole through the Western world's hubris...and inviting a useless lump of metal to become the most useful asset an investor could choose...
...despite it famously doing so little, it cannot even corrode.
Fast forward 20 years however, and here in late-summer 2020...with SARS-CoV-2 still laying waste to lives, loved ones and livelihoods everywhere (well, outside its source-city of Wuhan)...both tech stocks and gold prices have shot to fresh all-time highs.
How so?
In a word, lockdown. Stuck at home with nothing better to do, the Western world's more cash-rich households have seen their bank balances swell, thanks (mostly) to the collapse in their daily outgoings. Handed this bump in discretionary cash, everyone has tried to escape online...accelerating yet another trend already long underway, together with massive deficit spending by government (and negative real returns to cash in the bank).
Hence the surge in online shopping, led of course by DotCom Bubble poster-boy Amazon (Nasdaq: AMZN), with that relentless knocking on your front door making Jeff Bezos the richest man in the world.
Searching, downloading and streaming has also leapt...driving expectations of bumper profits for Alphabet (Nasdaq: GOOGL) and Netflix (Nasdaq: NFLX)...as has online stock trading in those very same shares. Hence the need to try insuring those equities with a little physical bullion.
Locked up under house arrest, institutional and retail investors alike have driven gold to new all-time record prices.
Priced in Dollars and cents...or Pounds and pence...or Euros and cents as well...gold has rarely gone higher.
Only ever on a handful of days, in fact. All of them within this month of August. 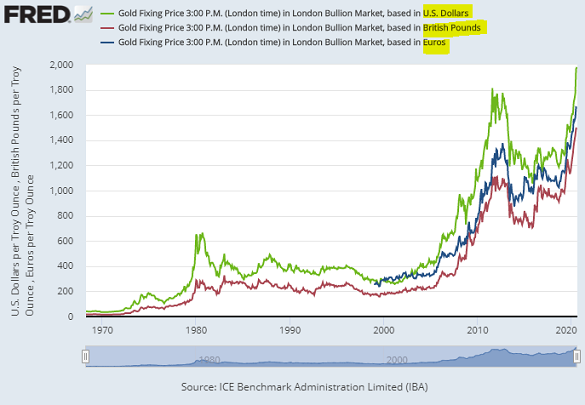 But faster still has been that surge in tech stocks. From March's Covid Crash lows, software-hiding-as-hardware brand Apple (Nasdaq: AAPL) has doubled in price, and is now worth $2 trillion according to the stock market.
That's a lot of money. "More than the GDP of a host of countries," gasps pretty much every financial hack the world over...
"...including Italy, Brazil, Canada and Russia...South Korea, Spain, Australia, Mexico, Indonesia, the Netherlands, Saudi Arabia, Turkey, Switzerland, Taiwan, UAE and Norway, among many others."
Okay, but that's only in cash terms, and there's always plenty more where that came from (© central banks everywhere).
So what about tech stocks in terms of gold?
What is human ingenuity – now priced higher than ever in dollars and cents – worth in the deathless metal? 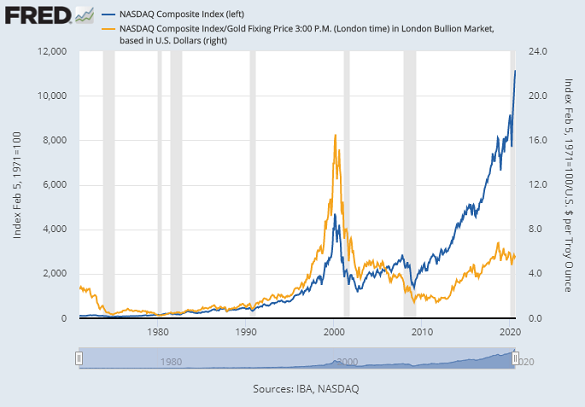 As you can see, the DotCom top's disaster for gold remains a long way from here. So too does gold's big come back a decade later.
To match Y2K's low, the incorruptible metal – that famous bet against humanity's apparently relentless progress – would need to lose two-thirds of its value in terms of the US-listed tech shares it can buy. But to match its own 2011 peak in terms of the Nasdaq, gold prices would need to quadruple.
No conclusions here then. So let's put Apple to one side. And Amazon...and Microsoft (Nasdaq: MSFT)...both now worth some $1.7trn according to stock-market punters.
What is gold really worth today? What is the metal's true value, rather than simply its price?
"I have a question," asks a very clever BullionVault user. (They're all top-drawer smart. Because they have entered the 21st Century's biggest bull market using the cheapest, safest, easiest route to outright ownership with instant liquidity.)
And his question is a humdinger.
"Is there a relative gold buying power 'commodities basket' index that can be used as reference comparitor to give an indication of the over/under valuation of gold over time?
"I am aware of the chief drivers of gold and the various well known yardsticks such as silver (albeit subjective), wages, property, loaves of bread and bespoke suits. But a more modern combined benchmark would be extremely useful."
An excellent question. Because while all those loaves of bread, suits of clothes, bricks of clay and other commodities offer some kind of yardstick, the oft-repeated claim – that gold always returns to its long-run historical value – just feels that bit too neat.
Very long-term historical data are unreliable by their very nature. And besides, the nature (or rather utility, and therefore human value) of such yardsticks does change over time (unlike incorruptible gold).
What is the true equivalent of a Roman toga and a pair of sandals today? Twenty years ago it was a rented wedding tux from Moss Bros. But now you might ask around Saville Row for a Covid-discount.
And who really wanted to swap one ounce of gold for 350 ready-sliced loaves in 1998...back when a study for the World Gold Council matched gold's then prevailing value to the time of Nebuchadnezzar...two-and-a-half thousand years before...
...never mind 350 hand-crafted artisan sourdough baguettes today?
To update with more reliable metrics, how about raw material costs for manufacturers over the last half-century? This tracks the US Producer Price Index (raw, red, left) against that same index divided by the US Dollar gold price (yellow, right)... 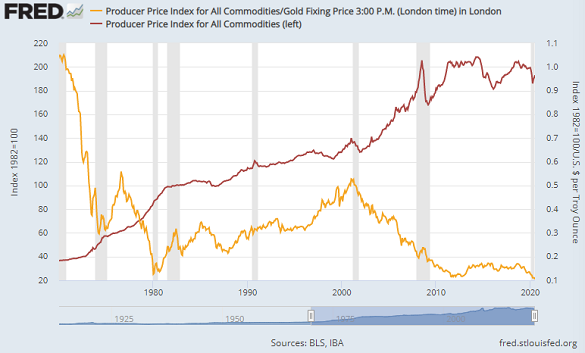 As you can see, input prices in Dollar terms are currently at levels first reached at the top of the 'commodity supercycle' back in 2008.
But in gold? They are as cheap as any time since 1970.
Alternatively, and a little closer to home for our British customers, here's the Pound in your pocket, again since 1970, in terms of the UK Consumer Price Index... 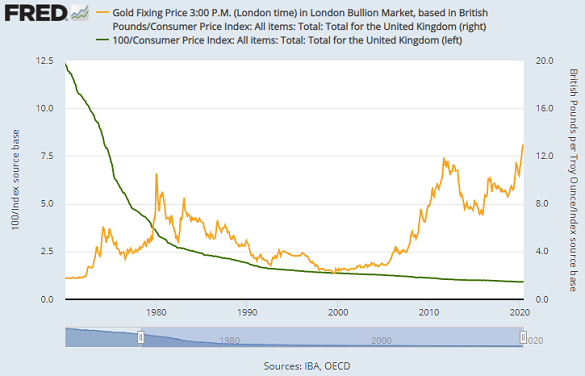 Accepting that (again) such indices are highly arguable (even over just half a century of technological and social change), this shows (green line, left axis) that where a Pound used to buy 12.5 units of stuff in 1970, it now buys just 0.9 units.
That's inflation for you.
But the purchasing power of gold in contrast (yellow, right) has never been higher.
Are either of these measures perfect? Might we be missing our client's very apposite question? No and yes respectively.
But using data from the US and UK's standing armies of statisticians and econometricians, we do think they suggest we are at significant levels in terms of gold's real value right now.
By itself that might sound like a sell signal. But sell for what?
Cash is trash, as central bankers keep promising. Yes, that's because they are so very worried about the Covid Catastrophe becoming a deflationary depression. But will you dare to fight the Fed by betting they won't unleash more QE...or target zero bond yields...or follow Japan, the Swiss and the 19-nation Eurozone in going negative on nominal overnight rates...or agreeing to all-out debt monetization (aka MMT) from the Treasury itself?
Real estate is meantime falling at the top, and stocks have never been so highly priced in Dollars, nor so rich (on this pundit's view, at least) in terms of the earnings collapse ahead. Versus the Covid-fuelled Nasdaq, remember, gold is currently worth only 1/4 of its 2011 peak.
Sellers may also face a risk that, while gold could be reaching a peak in real terms, it will now hold that real-terms plateau even as the cost of living rises.
Should central bankers win...and inflation swamps the threat of deflation...can you really imagine the true value of gold falling faster than cash as inflation accelerates?