END_OF_DOCUMENT_TOKEN_TO_BE_REPLACED

It's the big hit, it's the blimp! It's the blimp...!
GOLD PRICES have slipped against the almighty US Dollar so far in 2018, writes Adrian Ash at BullionVault.
The metal has sagged even as the stock market struggles and political risks jump on Trump's all-out trade war against everyone.
Why? How come gold is down, slipping almost 5% since New Year to touch $1240 at the start of July?
You could blame the Dollar itself, rallying steeply from 2017's big Trump dump on the FX market.
But gold prices today also stand lower for 2018-so-far against the Euro, British Pound, Swiss Franc and (most of all) Japanese Yen. It has barely moved from New Year versus the now-sinking Chinese Yuan or Indian Rupee.
Indeed, all that has really happened to gold as regards currencies in 2018 to date is that it has lost most of the premium it gained for US investors since Donald Trump took office in January 2017. 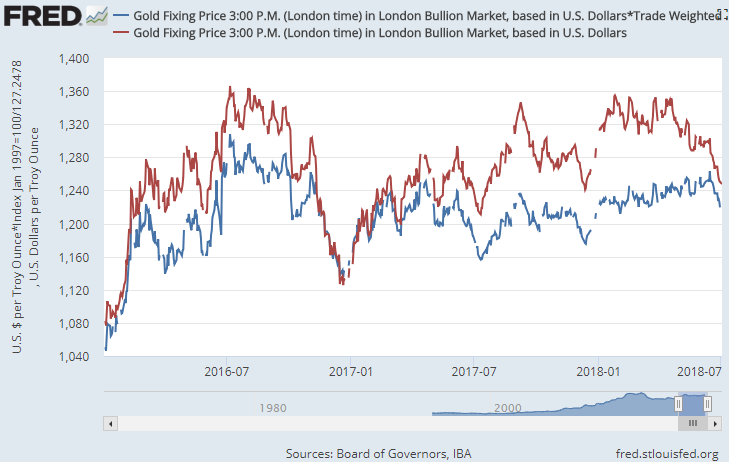 So if not currency, what?
"If there's any 'macro' factor that seems to drive gold prices," says John Stepek at MoneyWeek magazine, "it is 'real' interest rates. That is, interest rates adjusted for inflation."
With it so far? Says John:

Here at BullionVault, we have noted this link between real rates and gold prices a few times before.
More times than anyone could or should care to remember, in fact.
But this link does matter for investors and savers. Because when the returns paid on cash-in-the-bank rise faster than the cost of living, the opportunity cost of owning a lump of metal gets worse.
Most often that means gold prices go down as real rates rise. Or vice versa.
But if this held 100% true in 2018, gold would now trade much lower than it does today.
Relative to real 5-year US rates at this point in 2017, the current price of gold in mid-2018 should now come in around $1000 per ounce...
...having dipped as low as $900 a few weeks ago. 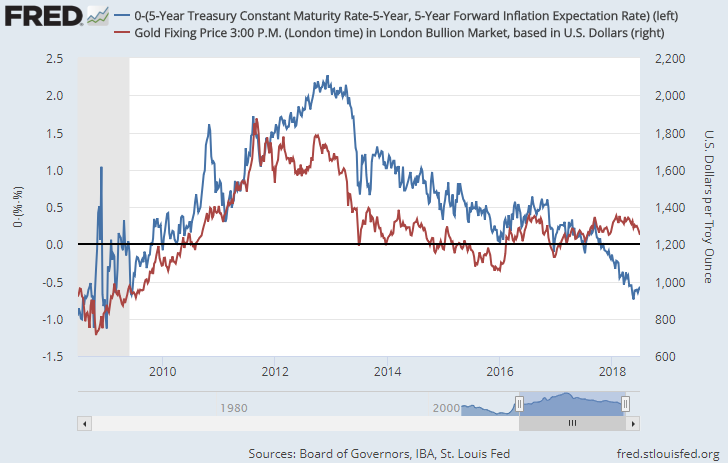 Looking at longer-term US rates, "It is also worth noting that the negative correlation between gold and 10-year yields hasn't held well since the start of the year," agrees Bernard Dahdah at French investment and bullion bank Natixis.
"Higher rates and yields typically increase the opportunity cost of holding gold," says Dahdah. "This is unusual."
How unusual exactly? 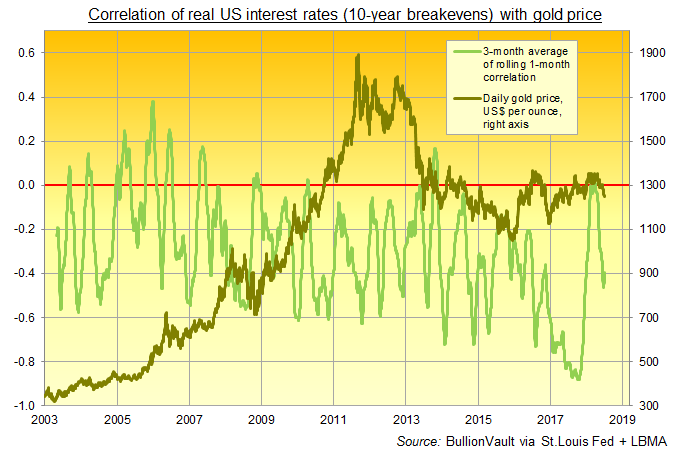 We first posted this chart in summer 2017.
But the green line didn't yet trace that huge hockey stick at the end.
It tracks the average daily correlation of gold prices with real 10-year US Treasury yields over rolling 90-day periods.
A perfect correlation reading +1.0 would mean gold and real yields rose and fell exactly in lockstep together. A perfectly inverse connection would read -1.0 and would mean they moved exactly opposite.
Typically the relationship is negative, as you can see. And back in summer 2017 the negative relationship between gold and inflation-adjusted 10-year US rates had never been stronger.
That soon changed. Jumping from a negative correlation of nearly -0.9 in October it read 0.0 by early February. That marked the fastest weakening on record of gold's relationship with real yields...
...only to assert itself again at the fastest pace since 2014 between March and today.
First gold fell towards New Year 2018 even as real yields fell. Which was odd. Then gold prices jumped in January even as real yields rose towards this spring's 7-year highs. Which was odder still.
Come early May, 10-year US government debt offered bond buyers almost 1% per annum above the pace of inflation foreseen by the market over the next decade. But by then, gold had already slipped back, drifting towards its more typical relationship with real yields.
Still, we think that 2017's record-strong inverse link deserves note. So does the collapse and then re-assertion of gold's negative relationship with real yields too.
Because gold's relationship with the real rate of interest – its key "macro driver" as John Stepek at MoneyWeek says – has whipped sharply over the last 12 months. Yet the price of gold itself has meantime slunk to the slowest, most boring, least volatile trading range in US Dollar terms in more than two decades.
Something odd, in other words, is looming over how the financial markets see US interest rates and inflation. And the biggest thing crowding the sky looks an awful lot like the inflatable 'Angry Trump Baby' being readied by protesters in London to welcome the US President next week.
Not the real Donald Trump, you understand. (And if you feel the Brits are being disrepectful to the President, just remember what we did to magician David Blaine.) Rather, this shadow is cast by the even-more cartoonish cartoon of the man sketched by journalists, pundits and analysts in trying to figure out his impact on politics, trade and the markets.
Nothing like as big floated over the global financial outlook in 2017 as this Trump cartoon. And there it hangs today in 2018...an angry blimp bobbing in the air.
Just the way the gold price is bobbing around $1250 an ounce.
Geopolitically, Angry Trump's most dramatic act so far are the trade tariffs. This clear break with recent US policy, plus the retaliation it's drawing, could put a halt to globalization and all the things flowing from it – most of all the growth in cross-border trade and the deflation in input costs it delivered.
This new turn to protectionism risks instead a deflation in trade volumes but inflation in business costs. It also comes after 30 years of surging cross-border flows in goods, capital and people...a surge which most everyone in the financial markets has been betting would only ever continue.
So it's no surprise real rates of interest are confused. No wonder either that their relationship with unchangeable, indestructible gold has grown so volatile.