END_OF_DOCUMENT_TOKEN_TO_BE_REPLACED

Low interest rates aren't low enough. Not yet...
IT'S A RARE politician who doesn't love cheap money, writes Adrian Ash at BullionVault.
That makes it rarer still when a politician picks a hard-money economist for key central-bank jobs.
You certainly won't find any today.
"German monetary hawks," said the Financial Times in late-May, "are making a concerted push for Jens Weidmann to succeed Mario Draghi as president of the European Central Bank."
"[But] the riskiest candidate by far would be the Bundesbank president," the FT then howled in June.
"Mr.Weidmann has opposed many of [current ECB chief] Draghi's innovations, including resort to QE. He even testified against OMT [aka QE on demand] before the German constitutional court."
Gah! Can you imagine a world without Quantitative Easing...? A world where central banks don't create cash to buy government debt, enabling governments to keep borrowing at ever-lower interest rates?
The European Council of member-nation leaders cannot.
Late Tuesday night it looked into the abyss...
...saw the abyss looking back...
...and chose instead Christine Lagarde, former French economy minister and now IMF managing director.
The result? Pretty instant in the bond market.
Here you can see the relief sweeping Italy's BTP borrowing costs down to their lowest since early 2018 versus Germany Bund yields... 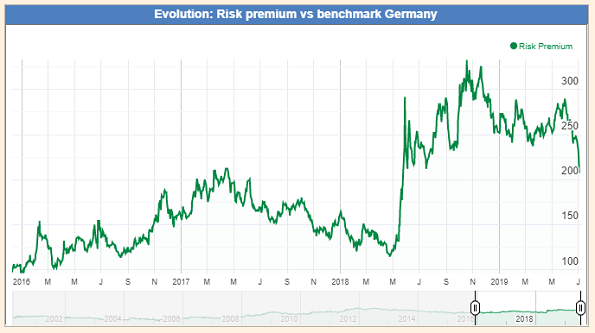 The Euro has meantime fallen back too, holding at what was a 12-year low against the Dollar when hit in the single currency's great plunge of New Year 2015.
This, of course, looks terrible to Donald J.Trump.
Even with US unemployment at half-century lows...and the US stock market jumping in June to new all-time highs with its best month since, like, ever...America's competitors are doing so much more to devalue their currencies and steal market share.
Or so says the President. Picking Lagarde over Weidmann will pretty much prove it.

....Think of what it could have been if the Fed had gotten it right. Thousands of points higher on the Dow, and GDP in the 4’s or even 5’s. Now they stick, like a stubborn child, when we need rates cuts, & easing, to make up for what other countries are doing against us. Blew it!

Hence today's other big news in central banking, with Trump himself pushing back against Fed chair Jerome Powell's mistakes.
"St.Louis Fed's Waller Joins Bullard in a Dovish Duo at the Fed," declares Bloomberg, noting how new Trump nominee Christopher Waller – research director on the western bank of the Mississippi in Missouri – helped his local branch boss James Bullard "form his commitment to low rates."
Better yet, Trump also named economist Judy Shelton as his other nominee for the Fed's policy team. And whatever the President says he might want to hear next, she looks just the person to say it.
A founder of hawkish foreign policy pressure group Empower America, "Ms.Shelton has also long been sympathetic to the gold standard," says the FT.
So has Trump! At least sometimes. A while ago. Before he was elected.
Next, she wants to ask "tough questions" of the Fed. Because "How", Shelton asked earlier this year, "can a dozen, slightly less than a dozen, people meeting eight times a year, decide what the cost of capital should be versus some kind of organically, market supply determined rate?"
Bulls-eye again, cos Trump doesn't like all that power the Fed now wields either!
"If it takes place at Mar-a-Lago," Shelton adds, proposing a new Bretton Woods summit – again named after its venue – to reset the 21st Century's global monetary system just like that 1944 conference set the post-WW2 landscape, "that would be great."
Hey, that's Trump's own luxury golf and hotel resort in Florida!
And now, Shelton just told the Washington Post, she wants interest rates " cut as as fast as possible."
Whoah! It's like you're reading Trump's mind. Just so long as you're not serious about a gold standard, a market-determined interest rate, or international co-operation on refiguring the monetary system.
"People are anxiously awaiting my decision as to who the next head of the Fed will be," Trump said back in 2017 when he was about to appoint Powell.
"I think everybody will be very impressed."
Whereas now, with interest rates raised above the pace of inflation for the first time since the eve of the 2006-2011 financial crisis, "I didn't ever threaten to demote him," Trump said late last month of his "impressive" choice for Fed chair.
"I'd be able to do that if I wanted. But I haven't."
Still, he could. And maybe he should.
"Obama had someone who kept the rates very low," Trump went on in that CNBC interview. "I had somebody who raised the rates very rapidly – too much. He made a mistake. That's been proven."
But maybe Trump made the mistake. Maybe he's making another. Because maybe Shelton, while wanting to cut rates, really is serious about this Gold Standard thing.
Ha! Only joking... 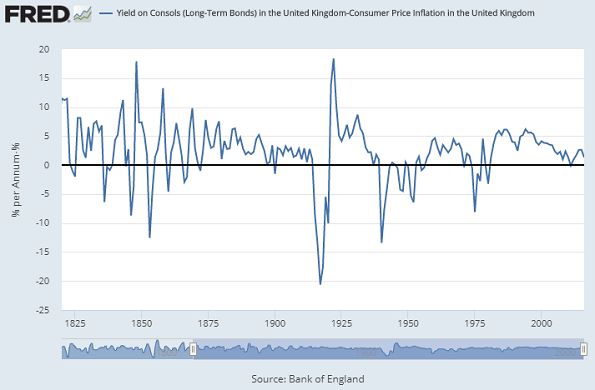 Today the US has 2.5% interest rates with 2.0% inflation...
...and Judy Shelton thinks the Fed is too tight.
The UK's high classical Gold Standard, in contrast, saw real interest rates (after deducting inflation) average almost 3% per year. Fighting to re-establish it after WWI put rates more than 6% above the pace of change in the cost of living, a level not seen again until the early 1980s' fight against inflation and never seen again since.
Put another way, that's the kind of return you need to pay if you don't want depositors and lenders to demand their money back in the form of bullion bars and coin...
...which just so happens to be what headline writers think is happening anyway.
" Gold prices back above $1400 on safe-haven buying," says one.
"Gold gains as global trade worries lift safe-haven appetite," says another.
"Should you join the gold rush?" asks a third.
Very possibly the answer is yes. Politicians are stacking central banks full of low-rate people. Rates are already on the floor, if not below. The trade war is tipping into a currency war, first on Trump's Twitter timeline, soon no doubt in policy meetings worldwide.
But as it is, and while gold investment demand has turned higher, there is no rush into gold by investors right now. Quite the reverse in fact in physical gold trading net-net.
Betting over in the futures and options market, on the other hand, has rarely been busier. Because the dingy little secret of this "gold rush" is that not only is it no such thing, but the people piling in are doing so because they love it when interest rates fall.
Last week the Comex derivatives exchange said that open interest in gold contracts – meaning the total number of bets now running – jumped above 1 million for only the second time ever.
The cause? The collapse in interest-rate forecasts. With the Fed (even under Powell) joining the ECB, Bank of Japan and Bank of England in all cooing very dovish noises last month, bond prices have jumped, bond yields have sunk, and betting on gold derivatives became a no-brainer for brainless hedge funds.
Over in the interest-rate market, no one has seen anything but a rate cut coming by next month's meeting since pretty much New Year. Now 30% of the betting on July's Fed decision sees the FOMC slashing rates by a half-point, rather than a measly quarter-point. That's well over twice the betting a month ago.
And history says it's a fair bet...
...what with 4 of the 5 rate-cutting cycles of the last 35 years all featuring half-point hacks to the cost of money either at or soon after they began.
The only one which didn't was the only one which stock-market bulls seem to think this 2019 cycle of rate cuts might become... 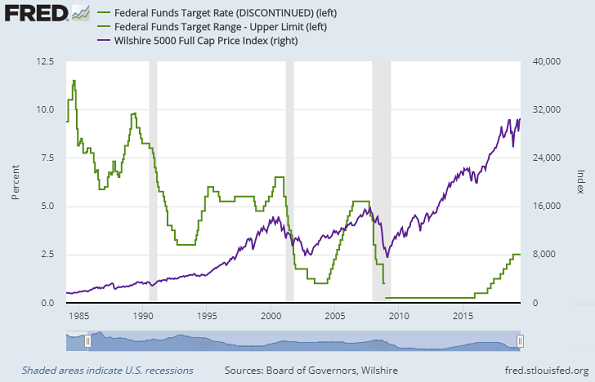 ...just a gentle trim, like in the mid-1990s, helping guide the stock market up to a run of fresh record highs month after month after month after month.
Buy anything, in other words. Better still, borrow money and bet on it instead. Stocks, gold, bonds, crude oil. Everything will have to go up. Because the cost of money is about to go down.
What could possibly go wrong with betting on that? And how long before the allure of physical gold...uninflatable and indestructible, just like a derivatives position isn't...starts to shine through?