END_OF_DOCUMENT_TOKEN_TO_BE_REPLACED

There is little rhyme or reason to these Fed-inspired moves...

LESS THAN a week after they climbed back above $1600, Gold Prices fell back below that level on Thursday, as Federal Reserve chairman Ben Bernanke appeared before Congress at the Joint Economic Committee. This is not the first time we've seen this, notes Ben Traynor at BullionVault.

Back on February 29, gold fell $100 an ounce while Bernanke was testifying before the House Financial Services Committee. What on earth is the man saying to have such an adverse impact on Gold Prices?

Well, on the two occasions cited above, it wasn't what he said, but what he failed to say that did the damage. In short, Bernanke failed to make any explicit promises of further Fed quantitative easing.

Last Friday, gold shot up 5% in Dollar terms, following disappointing US jobs and manufacturing data. Clearly, some traders were betting that the Fed would respond by announcing further stimulus, a bet that failed to pay off. Bernanke's reticence in this regard is hardly surprising, though. It's what central bankers do: they say as little as they can get away with to keep as many options open as they can.

They also talk to each other, and it seems the major central bankers have agreed a common script, one which has as its central theme a focus on the failings of fiscal policymakers (i.e. politicians). Here is European Central Bank president Mario Draghi speaking on Wednesday:

"Some of these problems in the Euro area have nothing to do with monetary policy. That is what we have to be aware of and I do not think it would be right for monetary policy to compensate for other institutions' lack of action."

And here is Bernanke a day later:

"...under current policies and reasonable economic assumptions, the [Congressional Budget Office] projects that the structural budget gap and the ratio of federal debt to GDP will trend upward thereafter, in large part reflecting rapidly escalating health expenditures and the aging of the population. This dynamic is clearly unsustainable...fiscal policy must be placed on a sustainable path that eventually results in a stable or declining ratio of federal debt to GDP."

In other words: don't look at us.

Central bankers are trying to put pressure on their political masters to deal with problems that are beyond the scope of monetary policy. It is these problems, they argue, that are at the root of the current crisis.

It was put to Bernanke by JEC vice chairman Kevin Brady that the Fed itself is encouraging political inaction by keeping QE3, a potential third round of quantitative easing, on the table. In other words, the belief that the Fed is on standby to combat any crisis makes a crisis more likely, reducing as it does the incentive to take difficult preventative action.

The trouble is, the Fed and other central banks daren't row too far back from talk of stimulus for fear that this will provoke a crisis. This is why Bernanke made it clear the option was on the table, while also saying "Look over there" and pointing at the so-called fiscal cliff – the combination of tax cut expiries and mandated spending cuts that await the US should lawmakers fail to reach agreements to prevent them (a genuine risk in an election year).

So we are at an impasse, meaning Gold Prices are susceptible to marginal sentiment and bets on what monetary policymakers will do next. This has been the case all year. For example, Gold Prices rallied in January after the Fed published projections showing its policymakers expected near-zero interest rates until late 2014. Gold also saw a jump in March as Bernanke reiterated the need for accommodative policies.

The truth is, though, that there has been little rhyme or reason to these moves. If you look at what Bernanke actually said on each occasion, it is pretty much a rehash of what he's said before. Fed statements since the start of the year have all broadly said this: "We're not out of the woods, we'll keep an eye on things, and we'll do as we see fit."

Details have changed, depending on the newsflow, but that's all. Here's an extract from Thursday's testimony:

Later on, Bernanke said there is "no justification" for fears that QE could spark inflation. Taking these comments together, one could make a case that the Fed are about to push the button marked 'More Stimulus'. But of course, traders had already jumped to that conclusion last Friday, and so were forced to 'unjump'.

The truth is, we don't know when or if we will see more QE, and we doubt anyone at the Fed does either. QE is not about economic stimulus. Not really. It may be packaged as a way of boosting growth, but in our view its real aim is to fight crises in the banking sector.

This is where it gets difficult for gold investors. It may be that the Fed, along with other central banks, are holding fire until the banking stresses in Europe become really acute. As we saw last November and December, a banking crisis can be accompanied by sharp falls in Gold Prices, as gold is sold or leased to raise Dollars, increasing its immediate supply and putting downward pressure on prices. Indeed, along with the disappointment that Bernanke was not more dovish following last week's economic news, another possible explanation for gold's fall this week is that uncertainty over QE raises the risk of a sudden funding crunch.

Another factor to bear in mind is inflation expectations. Bernanke said on Thursday that these are "quite well anchored". But some argue that they are still too high to make QE an immediate prospect, with 5-Year breakeven rates – the difference in yield between inflation-linked and nominal debt – still too high: 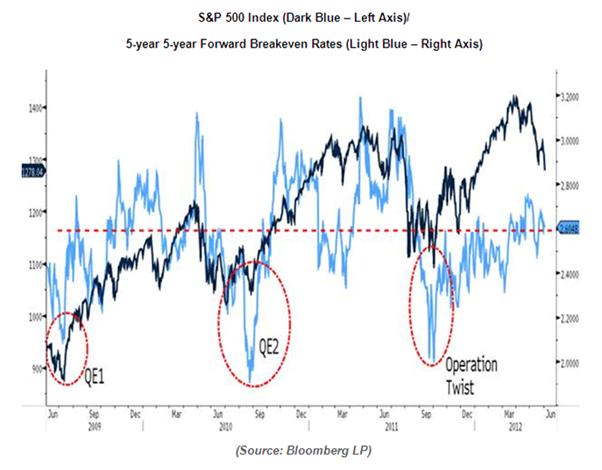 There remains a significant chance we will yet see more Fed QE. But things may need to get quite a bit worse first. In the meantime, the only clues we are likely to get are those we can glean from the Orwellian radio static of central banker doublespeak.

Or, if you're a long run investor, you could just ignore the noise being made by Gold Prices and crack open a beer...

Thinking of Buying Gold? Make it safer, cheaper and easier with BullionVault...