END_OF_DOCUMENT_TOKEN_TO_BE_REPLACED

Real rates count, because the value of money matters most...
GOLD PRICES just broke above $2000 per Troy ounce for the first time ever, writes Adrian Ash, staycationing at BullionVault today.
How come? And where next for gold bullion prices?
2020 has seen gold prices reach and breach $2020 because of everything you might think could count. Covid clearly matters, as does the dreadful economic impact of the anti-pandemic lockdowns. So does the massive stimulus spending and even bigger government deficits needed to fund it. So too does the worsening tension between China, the US and pretty much everyone else, even before we get to the November US election or the UK's final exit from the EU at end-December.
But all this matters to gold for a very simple reason. The plain fact is that gold rises when the real value of money is shrinking. So there's lots of fuss today about yields and breakeven rates in the bond market, and rightly so.
You can see the connexion here. We've written about it many, many times, including when the direction of travel was bad for gold prices. Because real rates count to gold prices. 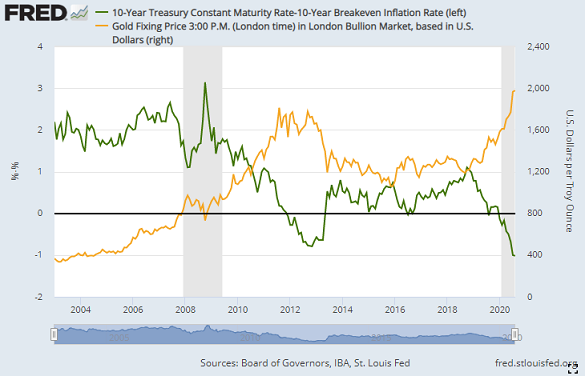 Today, the bond market thinks the Dollar’s domestic purchasing power is going to shrink by more than one-tenth over the next decade.
That's the outlook now forecast by 10-year US Treasury bond yields minus the break-even inflation rate also implied by the bond market. And that makes owning a little gold look highly attractive.
Unlike cash or bonds, gold cannot be created at will and so inflated away in value. Nor can it go broke on you, declaring bankruptcy and writing what you're owed down to zero.
Instead gold just sits there...failing to corrode, let alone default on you...as the ultimate store of value in all cultures and all ages, just as it has throughout human history.
But what about actual inflation now, rather than what the bond market believes will happen? 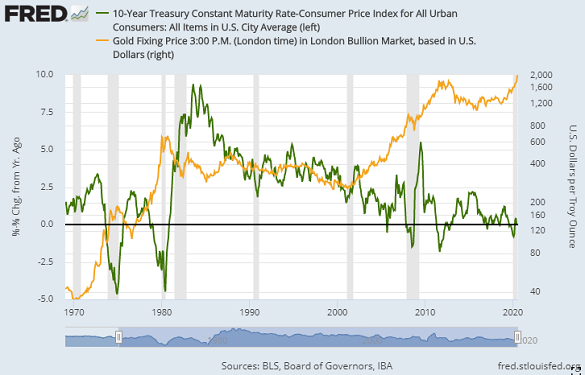 Here's a longer-term chart of real US interest rates. The green line tracks 10-year Treasury bond yields after deducting the actual pace of inflation in the Consumer Price Index at that time.
As you can see, each major peak in the gold price over the last half-century came as real interest rates hit important lows. Doubtless the next peak in gold will do the same, but that could be a long way higher than $2000 per ounce, because real 10-year yields have only just fallen through zero.
Adjusted for CPI inflation, the 2011 low in real rates came 2 percentage points lower than that, and real rates were nearly 3 percentage points lower again at gold's big 1980 and 1974 tops.
Nothing is guaranteed of course. Not apart from death, taxes and gold's eternal physicality. But if you're wondering whether now is a good time for you to buy, sell or try to ignore gold altogether, the answer is yes. Do whatever you like.
Gold won't care either way. But your purchasing power surely will, depending on how much gold you do or don't buy, and how much it then loses or gains as the real value of money rises or falls.