END_OF_DOCUMENT_TOKEN_TO_BE_REPLACED

Recall what happened to gold prices 7 years ago this month in the Lehman's crash? Wanna bet on a repeat...?
MAYBE it's the end of the world...maybe there's nothing to worry about, says Adrian Ash at BullionVault.
If the former...rather than blue skies, plain sailing...how might precious metals respond?
Between the collapse of Bear Stearns in March 2008 and the crash of Lehman Brothers six months later, the price of gold dropped 25%.
The real start of the real crisis, in other words, was ignored by the mass of investors, professional and private. They assumed things were just fine..."contained" in the words of the time...and resolved by the US Fed arranging a rescue of the credit bubble's worst miscreant.
Indeed, speculators in the US gold futures and options market halved their bullish betting on gold...and doubled their bearish bets as a group.
Because, what could go wrong?
The worst behaved bank wasn't the biggest, however...nor the worst. And when the cracks in the wall really broke and the whole dam collapsed, the dash for gold began amid the worst slump in global trade and credit since the 1930s.
At first, gold prices shot higher. Then they crashed with everything else...swinging $100 per day at one stage to hit 13-month lows fully one-third beneath the Bear Stearns' high of March 2008.
How come? Even as physical demand from 'real money' investment managers and private investors leapt, it also destroyed much of the financial credit needed by hedge funds and other speculators who were betting that gold would rise via the US Comex derivatives market. Silver got hit even worse, as we explained as the dust began to settle.
Tail wagging dog? The relationship between derivatives betting and the gold price is, perhaps, controversial. Whether derivatives trading can determine the physical price long term is far from clear. But looking at US regulator the CFTC's weekly commitment of traders data, the plain fact is that positioning by speculative players (ie, those futures and options traders working outside the miners, refiners or bullion banks) shows a very strong, positive correlation with prices on a short-term basis.
Week-to-week, the average correlation of Dollar gold prices with the 'net spec long' position (ie, the number of bullish bets minus bearish bets held by that group) has been 0.87 over the last 20 years. It would read 1.00 if they moved absolutely in lock-step with each other. Anything over 0.70 would be deemed 'very strongly positive' by statisticians. You can see the recent relationship here. 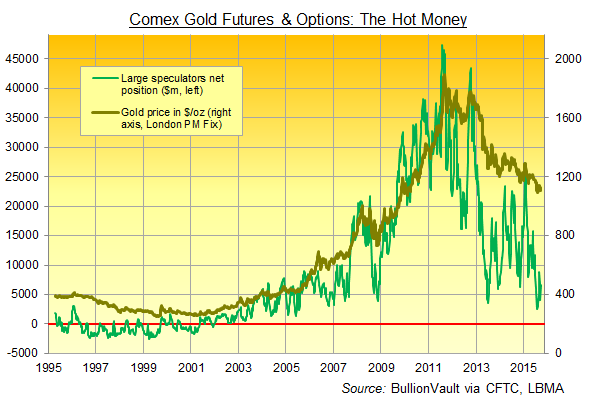 Could a Lehman-style crash (if it strikes) force gold lower again in 2015, thanks to a loss of speculative credit across financial markets sucking some 'air' out of prices short-term?
Maybe. The big difference from today against summer 2008 is that speculative traders are now very much less bullish overall, both because that group holds fewer bullish contracts in total (barely 25% as many) but also holds many more bearish bets (almost 4 times as many) as on the eve of the last crash. 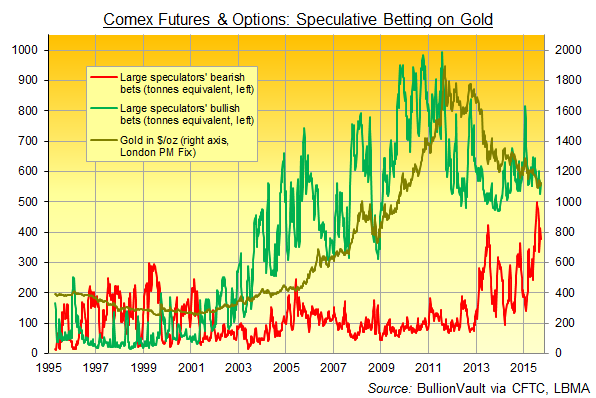 The 'hot air' of derivatives credit, in short, has now inflated the bearish pressure on gold prices. Should it suddenly gush out, we might expect prices to rise, or at least to escape the deflation they suffered when credit was pulled from the much more bullish market of 7 years ago.
No guarantees, of course. Because if you dare recall the panic sweeping the markets...as well as businesses and households worldwide...7 years ago, you'll remember what a real financial crisis looks and feels like.
Buying credit-crunch insurance wasn't so plainly smart when the end of the world seemed at hand. Hence the volatility.
For now, and given that futures and options contracts do reflect the broader sentiment of professional money managers, note that the ratio of bullish to bearish bets amongst speculative traders now stands at levels last seen in 2002...down below 1.5 bullish bets for every bearish contract.
Compare that with the 20-year average of 4.1...or the 2008-2009 peaks near 15-to-1.
Sure, sentiment surveys say that money managers are far more cautious today about the outlook for world stock markets and 'risk' assets. But what they say and what they do are two very different things. And actual behavior, meaning the trades they've put on using client money, suggests the complacency which whacked the investment industry in 2008 is very much greater today.
Maybe the City, Wall Street, Frankfurt and the rest have been calling it right, selling and shorting gold while piling on equities and corporate bonds. They certainly seemed to think that was the right call, judging by behavior. Right up until the economic data has now started to sour.