END_OF_DOCUMENT_TOKEN_TO_BE_REPLACED

Record Comex gold correlation to prices...
0.9999 writes Adrian Ash at BullionVault.
That's pretty much the finest purity you can buy in physical gold bullion, with just one part not gold in ten thousand.
(Not that you should pay for anything beyond the pure gold weight, whatever the fineness.)
Over in the 'paper gold' market however, that same number – a zero and a decimal point followed by four nines – marked this summer's record-breaking impact on prices from traders outside the precious-metals industry betting on gold futures and options.
This figure would read +1.0000 if gold prices and the balance of bullish vs. bearish bets on Comex contracts moved precisely in lock-step.
Known by statisticians as the 'r' co-efficent (specifically the Pearson product-moment correlation), it would read -1.0000 if they moved perfectly opposite.
So from mid-summer 2018's record-high reading of 0.9999, it couldn't get much stronger.
Chicken and egg? Horse and cart?
Correlation isn't causation, as those people in lab-coats like to remind us.
But it looked awful close in Comex gold this summer...

No, speculative betting in Comex futures and options rarely involves any gold.
Because if a hedge fund or another player outside the mining, refining and bullion banking business really wanted to buy or sell the metal itself, well...that's what they would do.
But trading futures and especially options contracts offers the magic of leverage, turning a little down-payment into much bigger gains (or losses) if the speculator calls it right (or wrong).
And if speculators as a group get more bullish, that tends to coincide with prices going higher.
Whereas if they turn more bearish on derivatives...selling gold futures short (or buying put options) to bet it will fall...that tends to see physical bullion prices drop back as well.
Over the last 20 years in fact, the number of long contracts held by these 'Large Non-Commercial' traders...minus that group's short contracts...has moved in the same direction as the underlying gold price in 2 out of 3 of all weeks.
And as July turned into August 2018, the tussle between Comex gold bulls and bears mapped the move in gold prices almost exactly.
Measured on a 5-week basis in fact, the relationship between the gold price and the bullish vs. bearish betting of non-industry players reached as near an example of perfectly positive correlation as you'll ever find without tracking the same thing against itself by mistake.
Did the speculators just follow gold lower? Or did they send gold prices down?
And if the latter, then what was missing to let them push old yellow around? 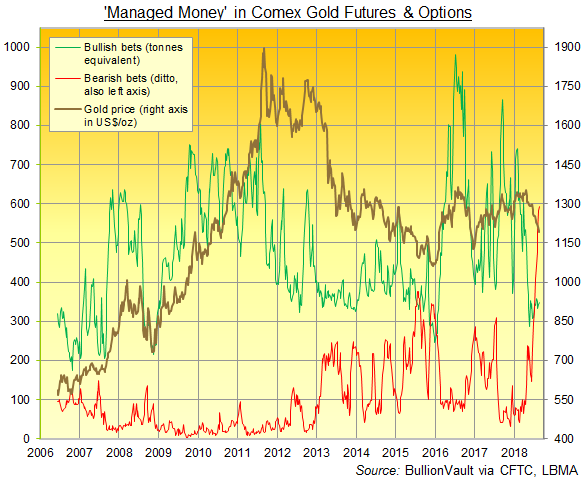 Drilling down into the weekly data gathered by US regulator the CFTC, the number of bearish bets against gold held by hedge funds and other 'Managed Money' traders set a run of new all-time records this summer.
Both gross and net of this smaller group's bullish bets, they have never been so down on gold. Not at least since the 'Managed Money' data series began in 2006.
Cue analysts to predict a 'short squeeze' surge in gold prices.

"Any price rally," says a note from German refining giant Heraeus, "could be fuelled by the significant short positions being closed out."
"Short positioning may quickly reverse," agrees the mining-backed World Gold Council, "should one of the many current macroeconomic risks materialise."
"While we don't know when the bounce will occur," says another note, "all the fundamentals are screaming short-squeeze gold rebound. [Expect] a violent counter-rally."

The rebound could prove dramatic, agrees gold-fund manager John Hathaway, because the bearish position of Managed Money traders is so "extreme".
He uses that word 16 times in fact in his latest opinion piece.
So far, so bullish...albeit starting from the cheapest Dollar prices since early 2017. And the last 10 years of data concur.
Since this point in 2008, nearly four-fifths of all weeks saw the net long position of Managed Money traders in Comex gold futures and options move in the same direction as prices.
So whether it's chicken or egg, a bullish turn in that position will most likely see prices rise too.
How big fast could gold prices rise if the shorts get squeezed?
History doesn't offer much guide. Since current data began in 2006, the Managaed Money has been net negative on gold in only 12 weeks...
...half of them in summer 2015 and the other half falling around the end of that miserable year for gold investors.
Still, gold prices traded higher 3 months later from all but 1 of those weeks.
On our maths, the average Dollar price gain was 11.6%.
But that's just history. Nothing is certain...
...not outside death, taxes, and the herding behaviour of hot-money speculators in precious-metal derivatives.
NB: Include all non-commercial players however – meaning all the larger Comex gold traders outside mining, refining and bullion bank dealers – and the current position looks far from extreme.
Since this broader collection of data began in spring 1995, the net short position of all "Large Non-Commercials" was bigger than summer 2018 in 171 weeks all told.
Across the last 2.3 decades of data, that's one-seventh of the time. All of it was squeezed into gold's misery years of 1995-2001. 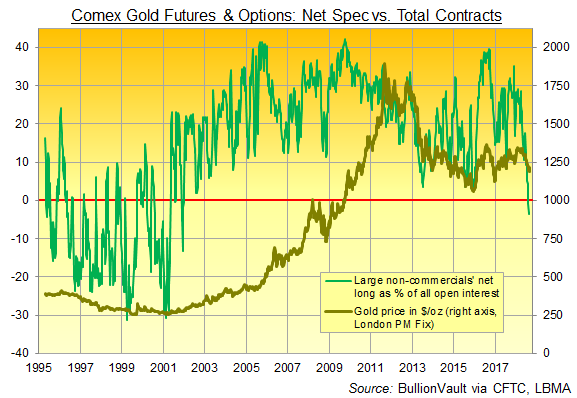 Size is relative, and measured against the number of all Comex futures and options contracts open each week, this summer's "net spec" bearishness position barely registers versus the big shorts of the late 1990s.
First because the net short position is much smaller itself. Second 'cos open interest is now 3 times its average level back when speculators really hated on gold at the turn of the millennium.
Also note that just as the hot-money got to push the gold price around over summer 2018, demand for physical gold itself went very quiet.
Yes, a couple of central banks sneaked in to pick up a bargain. Moscow also continued buying gold directly at the pit-head, just as it has since Western sanctions first started to block Russia's domestic output from reaching the global market so easily back in 2014.
But as a group, central banks came into summer 2018 buying barely one-tenth as much gold in June as they had in the same month in 2017.
Big investors meantime shied away from gold-backed ETF trust funds...private investment only grew among existing owners, rather than attracting floods of new buyers...and Asia's massive consumer demand shut down for the summer as usual.
What little bargain-hunting China and India may have seen was also blocked by local prices failing to slump thanks to the almighty Dollar's continued surge. That meant Rupee and Yuan gold prices didn't fall anything like as hard as USD prices.
Still, gold's infamous summer shutdown is now over. Weddings and festivals are now returning to the Hindu calendar, and prices for gold landed in China are rising to a solid premium over London quotes, suggesting that stockpiles in the No.1 consumer nation need refilling as the New Year shopping and gift-giving bonanza draws near.
By itself consumer demand for jewelry or even coin and small-bar is unlikely to push prices higher long term. For that gold needs large chunks of investment cash – scared money, as a rule, seeking a home outside over-valued or crashing stock or bond markets.
Pending that wake-up for wealth managers however, it was this summer's vacuum in the physical market which let derivatives trading push prices around. Autumn's return of physical flows could very well put the frighteners on today's record short position among hedge funds and other 'Managed Money' speculators.