END_OF_DOCUMENT_TOKEN_TO_BE_REPLACED

Gold in Dollars just went flat from 12 months ago. But in Euros...?

FRIDAY the Thirteenth saw the Gold Price in Dollars do something it's managed only 7 times in the last 11 years, writes Adrian Ash at BullionVault.

Gold traded flat from 12 months before. If you bought on 13 July 2011, you hadn't made a dime by the time New York got itself showered and brushed its teeth this morning. You held just the same Dollar-value one year later – basis the London AM Fix – at $1579 per ounce.

Between then and now, in fact, anyone Buying Gold to insure, hedge or speculate-to-accumulate with their Dollar savings was more than likely to have paid a higher price, too.

The Gold Price in Dollars has been higher than it was Friday morning on 227 trading days. All of them came after 13 July 2011. Half of them were in 2011, and the other half here in 2012. Only 25 trading days saw gold below where it stood this morning. Even Friday afternoon's little pop to $1595 left gold in Dollars badly lagging the last 12 months' average. 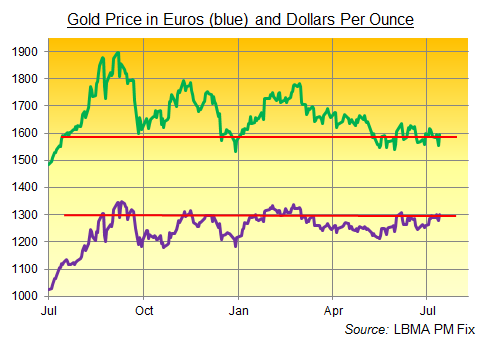 Now contrast that with the Gold Price in Euros today. It's only been higher on 45 trading days. Recording a London Fix of €1300 per ounce Friday afternoon, in fact, gold has gained 16% for Eurozone buyers from this day last year.

How come? Most obviously, the Euro has of course fallen versus the Dollar. So what has been flat for US investors has risen for investors in France, Germany, Italy and the other 14 single-currency states. But what's driven that fall in the Euro highlights both why people Buy Gold, and what it can help do for them when they do.

The Eurozone crisis might well worsen the economic slowdown worldwide. A true sovereign default – or exit – would most likely spark the kind of globalized panic not seen since Lehmans failed, or worse. But until then, the focus of these rising tensions is squarely inside the single-currency zone. And if you're Buying Gold to insure against that kind of concern, it's asking a lot to get insurance on other people's localized crisis as well.

The Dollar's rapid tumble of 2002-2008, for instance, sparked much debate and anxiety about the US currency's role as world #1 reserve. It left Euro Gold Prices pretty much untouched, however, until the financial crisis – seemingly localized in the US housing and mortgage market – revealed itself to be all too international.

Again, the rising temperature in Europe today – what the World Gold Council's Marcus Grubb calls "the ambient temperature" of what is now a permanent emergency – may well prove hot for Dollar, Sterling and Yen investors too in due course. Meantime, gold is holding near its all-time record highs for Eurozone citizens. That's a clear sign that the ambient temperature, the background radiation, of this crisis is also dangerously strong.

What if the emergency's focus expands to include the Dollar, or switches to the US fiscal cliff, zero-rate policy, or long-term structural bankruptcy of the fifty United States? Of those 7 occasions since summer 2001 when the Gold Price in Dollars has been flat from 12 months before – like it is today – then buying that dip has proven a winning trade.

The minimum return 12 months later again has been 25%. On average, Buying Gold when it's gone nowhere – or slipped a couple of per cent from a year earlier – has returned 33% for US investors over the following year.