END_OF_DOCUMENT_TOKEN_TO_BE_REPLACED

EUROPE might be facing deflation, and Greece might go on firesale after this weekend's vote. But €1.1 trillion doesn't buy what it used to, writes Adrian Ash at BullionVault.

Last winter, the European Central Bank poured money onto the currency union's commercial lenders, lending them cash to lend in turn to their domestic governments by buying government bonds. Now Spain's 10-year bond yields are at a fresh Euro-era high of 6.73%. Italy's borrowing costs are back where they were before the second chunk of El Tro in February.

The cheapest 3-year money in history – lent for just 1% per year – has proven itself worthless in short, and faster than even we expected here at BullionVault. Any wonder people keep Buying Gold?

The recent swoons and jumps in the Gold Price, however, have the market scratching its head. Both of this week's pops came just as New York got to its desk, but with barely a ripple in the Gold Futures market – where US traders typically throw their weight around. So it seems most likely to be simply a heavy gold buyer, bidding up prices for a chunk of physical metal in the wholesale market.

Whoever it is, they're spoilt for reasons to Buy Gold – Greek elections on Sunday, record-high Spanish bond yields, or a weakening US recovery. Take your pick. Massive money inflation, either before, during or after a major credit default, isn't a risk you can discount to zero or nearby today.

Yet still the finance business demands cause and effect. The obsession with tick-by-tick reasoning – the relentless search for "This because that" – goes far beyond financial journalists. The classic example, cited in Daniel Kahneman's recent Thinking: Fast & Slow by way of Nassim Taleb citing it in The Black Swan, was when a Bloomberg headline writer first blamed the capture of Saddam Hussein for a rise in US Treasury bond prices, and then, minutes later, rewrote the headline to blame the very same event for T-bonds falling when the price dropped.

"The two headlines look superficially like explanations of what happened in the market," says Kahneman. "But a statement that can explain two contradictory outcomes explains nothing at all."

And so in gold, some market participants saw this Tuesday's $30 jump, says one bullion-bank salesman, coming from Fitch's downgrade of Spanish banks. Others players we spoke to saw Wednesday's rise – which then reversed – coming off the weak US retail sales data. Yet more traders saw both moves as just noise spat out by automated traders, those algorithms run wild on electronic platforms which mean even market-makers can't see quite what is happening with physical flows.

"The Electronic Platforms, or 'machines' or 'toys'," says one, "already installed at clients' desks and currently marketed by commercial banks for precious metals trading [mean] that market-makers are lacking a bit of view of what is happening on the spot [market in gold] from time to time."

Moving a little flow away from the biggest banks might sound a "good thing" to some. But blaming the electronic machines and toys for nonsense moves in the Gold Price is becoming a popular pastime in the professional market, especially for traders caught the wrong side of what feels like volatility. 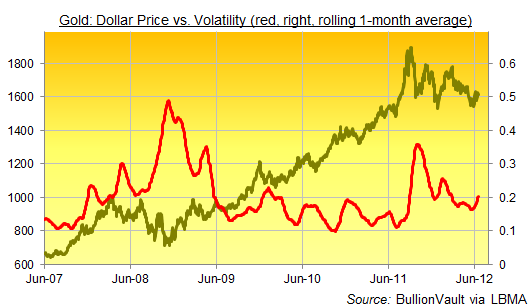 Truth is, however, the violence of Gold Price swings has been easing since last summer's 3-year highs. And if London's market-making bullion banks feel they can't hang a story on what's driving the price tick-by-tick, few journalists or private investors will spot the "true" cause either. So save your energy. Because what matters, as with any home for your savings, isn't whatever breaking headline might or might not be driving other people (or machines) to buy, only to sell – and buy again – before the next newswire update. It's the core reasons you do or don't identify for your own decision to buy or sell.

With Gold Investing, we'd suggest, those reasons to consider start and end with the threat to your own savings from the ugly twins of default and devaluation. Still lurking round the corner, what odds would you put on them mugging your money in the next month, year or half-decade? Five years and $900 per ounce after the start of the financial crisis, it still looks a long way from finished yet. And hoping that you won't need uninflatable, indestructible gold isn't the same as not needing it.

Get the safest gold at the lowest prices using world #1 online, BullionVault...