END_OF_DOCUMENT_TOKEN_TO_BE_REPLACED

Selling outweighs gold buying on Ukraine price spike...
GEOPOLITICS might be driving gold prices, but those prices are driving heavy profit-taking among active investors, writes Adrian Ash at BullionVault.
Ignore anyone who tells you different today. A one-way "gold rush" there ain't on the worsening Nato-Ukraine-Russia tensions.
Not that it's shock news. The gold market has seen this movie many times in the past, most recently in summer 2017 when North Korea's missile tests included firing an ICBM over northern Japan.
To be clear, gold demand is running strong right now. Thursday's pop in gold above $1900 as the stock market fell and Ukraine tensions worsened saw gross purchases on BullionVault up 163% from the prior 365-day average by weight.
But selling was twice as heavy, up 485% from its 365-day average. Net-net that resulted in the 5th heaviest 1-day liquidation of the last 3 years.
Maybe that smacks of complacency. Maybe investors in Europe should worry more about the continent's first major-power conflict since WW2. But across BullionVault's global client base, price is determining investor action, rather than proximity to Ukraine. 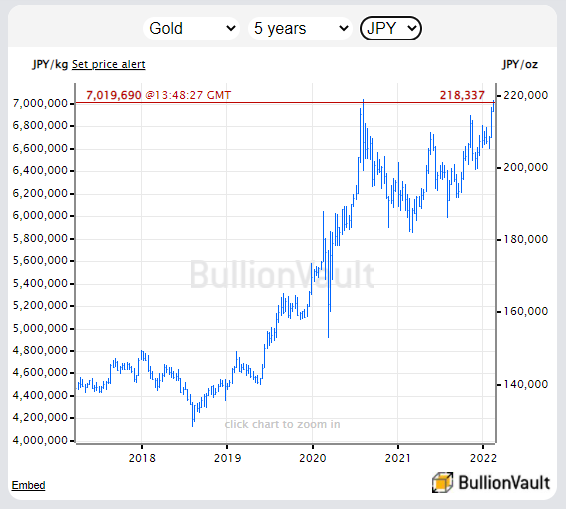 Across in the stock market, gold ETF holdings are flat overall on strong volume.
GLD trading on Thursday was twice as heavy as its 90-day average, with volume in the smaller IAU up around one-half. Neither has shown any sign of investor inflows.
Coin and small-bar dealers in the retail market are meantime cutting their bids to counter heavy customer selling, and new coin demand also looks weak, running so far this month at just 3/5ths of last year's average daily pace for American gold Eagles from the US Mint.
So are the sellers right? Is now the time to quit gold or go short?
Firstly, no one ever went broke taking a profit. Secondly, net liquidation in gold remains marginal following January's profit taking, even on this week's multi-month and near-record price highs.
Net-net since 1 February customers have liquidated just half-a-kilo – barely 0.001% of the 47 tonnes belonging to BullionVault users in total – thanks to solid net demand ahead of this week's profit taking.
Thirdly, and further ahead, the underlying drivers of today's near-record gold prices look set to hold firm, even while the lack of physical follow-through from that Comex speculation means bullion prices are likely to retreat if (and when) Nato-Russia tensions ease (fingers crossed).
Geopolitics, in short, might be driving gold prices right now. But while those prices are driving heavy profit-taking among active investors, the long-term picture for physical bullion investing looks positive.
Most of all because so much else in the economy and financial markets looks negative.