END_OF_DOCUMENT_TOKEN_TO_BE_REPLACED

Which jerk is in charge doesn't count...
WHATEVER threat the chaos of Trump's exit or aftermath might pose to US democracy (or not), does it risk knocking a hole in your money? asks Adrian Ash at BullionVault.
Not according to the stock market. Which is fitting. Because equities just loved Trump's time in office. 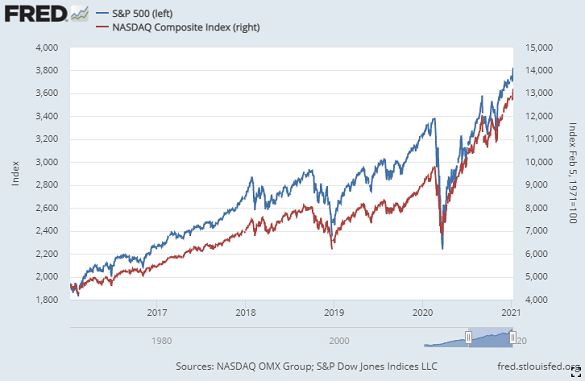 The tech-heavy Nasdaq index more than tripled since The Donald took power, while the S&P500 more than doubled.
And to mark Trump's departure, the MSCI World index jumped to yet more new all-time highs after his fanboys attacked the Capitol...
...led of course by the US stock market itself once more.
Politics doesn't matter so much to money, in other words. Not any more.
And our New Year survey of BullionVault users agrees. 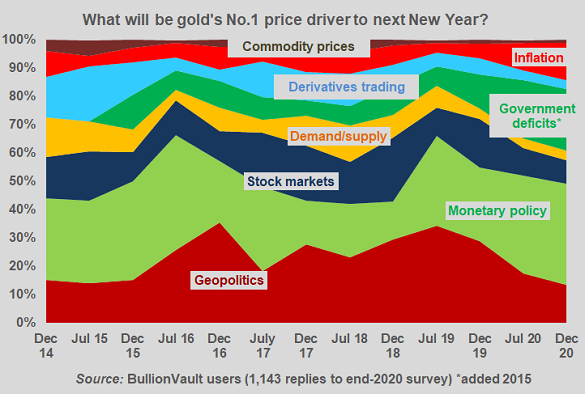 As you can see, monetary and fiscal policy top the list of 2021's key drivers for precious metal investors.
Indeed, out of the 8 categories, monetary policy came second to geopolitics between 2017 and 2019...
...but it topped our poll in both July and December 2020, rising last month to its strongest ever reading at 35.7% of all responses.
The size of government deficits also gets its strongest vote, up at 21.7% of all responses.
Geopolitics came next, but even with Brexit now a fact...China losing friends (if not sales) over its awful human rights abuses...Russia apparently hacking the US at will...and Washington facing a 'far right' insurrection as a very old man takes the White House...it got its weakest showing since we launched these biannual surveys in 2014 at 13.8%.
Thank you to the 1,100-and-more readers of our BullionVault Weekly Update emails who replied to our questionnaire in December...
...the largest survey of private bullion investors we know of.
Sorry to those who wanted to talk about other things ( bitcoin! Bitcoin! BITCOIN! of course)...
...but precious metals is our focus...
...and physical bullion is the focus for many of our respondents' portfolios too. 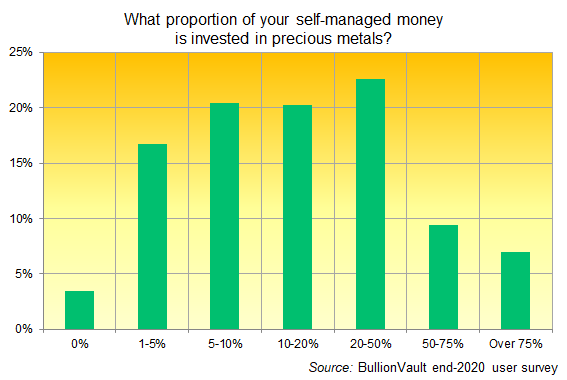 As you can see, some people using BullionVault love gold, silver and platinum almost as much as we do here at BullionVault itself.
A respectable 5% to 10% is popular. But one-in-6 respondents holds over 50% of their self-managed money in gold, silver or platinum!
So they'll be hoping that our latest survey's big outlook for bullion prices comes good.
Because more than 84% of our users expect the price of gold to continue rising in 2021...
...extending what was its strongest year in 10...
...with a quarter of respondents anticipating a price gain of more than 30%.
This proportion has never been higher in the 6-year history of our survey, and a similarly bullish result is seen for the price of silver.

But what about the vaccines? Won't they kill the bull market in precious metals?
Not according to BullionVault users.
At 54.8%, more than half of respondents said they plan to continue buying more precious metals in the coming year while making other investments to maintain their current spread of assets. Only 14.1% of respondents plan to reduce their holdings.
Bottom line? Gold as an asset class has now become an integral part of many private investors' portfolios...
...a trend already long in development before this dreadful virus.
Nevertheless, the economic downturn triggered by the pandemic have further reinforced the case for physical bullion...
...whether as a portfolio hedge and inflation defence in gold, or an inflation play and 'green tech' stimulus winners in silver or platinum.
The fact that global stock markets have surged during the worst economic crash since WW2 certainly hasn't diminished the case for gold as a safe haven.
On the contrary, the huge taxpayer and monetary stimulus fuelling this exuberance mean that 2021 brings very real risks to long-term savings.
Precious metals offer a timeless alternative both to financial assets and to cash savings, and while gold, silver and platinum may struggle to repeat last year's record investment inflows as the pandemic recedes, their value and appeal as a tool for diversification look set to remain undimmed.
The slow, steady devaluation of cash savings through negative rates and quantititative easing continues to boost the appeal of precious metals, and it risks becoming rocket-fuel for asset prices if the move into shares, real estate, commodities and even crypto becomes a rush out of official currency in 2021.
Which jerk is in charge...or who's lobbing rocks at whom...won't matter so much in 2021.
But money politics will.