END_OF_DOCUMENT_TOKEN_TO_BE_REPLACED

Yet another UK leader quits with the Pound losing to gold...
ANOTHER prime minister, another move higher for the gold price in British Pounds, writes Adrian Ash at BullionVault.
Back in mid-2019 we wondered whether Theresa May's successor would snap the trend of ever-rising gold prices for UK investors and savers.
Gold had, at the time of writing back then, actually slipped a little during May's brief and chaotic tenure at Number 10. But by the time Boris Johnson was anointed as her replacement 2 months later, she had joined the list of UK prime ministers to see gold prices rise across her reign.
And the verdict of history on the Clown Prince?

"The most important thing about money is to maintain its stability," wrote Bernard Shaw, the one-time Fabian socialist and then fascist/communist fan-boy who would go on to say approving things about Hitler and Stalin as they murdered opponents, civilians, truth and hope in the 1930s.
The aim, Shaw went on 94 years ago in The Intelligent Woman’s Guide to Socialism and Capitalism, was to ensure "that a Pound will buy as much a year hence or 10 years hence or 50 years hence as today, and no more."
Fifty years sounds like an impossible stretch of time today for any currency to hold its purchasing power. But prior to the outbreak of World War One, the Pound Sterling – founded on silver and then built on gold – had held its domestic value for pretty much 350 years running.
How so?
"With paper money," Shaw explained to his intelligent women readers, finally granted a vote in British elections under the Equal Franchise Act of 1928, "this stability has to be maintained by the Government. With a gold currency it tends to maintain itself even when the natural supply of gold is increased by discoveries of new deposits, because of the curious fact that the demand for gold in the world is practically infinite."
Cue Shaw's punchline:
"You have to choose (as a voter) between trusting to the natural stability of gold and the natural stability of the honesty and intelligence of the members of the Government. And, with due respect for these gentlemen, I advise you, as long as the Capitalist system lasts, to vote for gold."
Today you might often find this Shavian witticism quoted as a reason to buy gold for investment. (You're about to find it again in a moment.) But around a century ago, voting for gold as money was very nearly a thing which you might have been able to do.
Yes, Britain had suspended its almighty Gold Standard when the Great War broke out in 1914, but the post-war Government made returning to gold a priority, and lots of clever gentlemen agreed it should and could be done ASAP.
Indeed, if the UK's latest Prime Minister to quit in disgrace and failure had pushed on with his half-hearted Winston Churchill cos-play a little further, he might have proposed a return to gold himself. That's because Johnson's repeatedly-stated 'hero' was the Chancellor who in 1925 had put the return to gold into action.
That return fell apart just 6 years later, undone by over-valuing the Pound at its pre-war exchange rate, the burgeoning cost of what became the welfare state, plus a global economic depression. London thus blazed a trail for the rest of the world to follow over the coming months, years and decades, by leaving the Pound to float freely with no anchor other than political hope and management.
The value of Sterling has never looked back...
...losing over 75% of its foreign exchange rate against the US Dollar...
...dropping 99% of its domestic purchasing power (although the goods and services you can buy are of course very different)...
...and losing well over 99% in terms of gold bullion (which hasn't changed at all).
Like the Pound's devaluation versus the Dollar, its loss of purchasing power in terms of both the cost of living and physical gold bullion really took hold as the 1960s tumbled towards the 1970s. 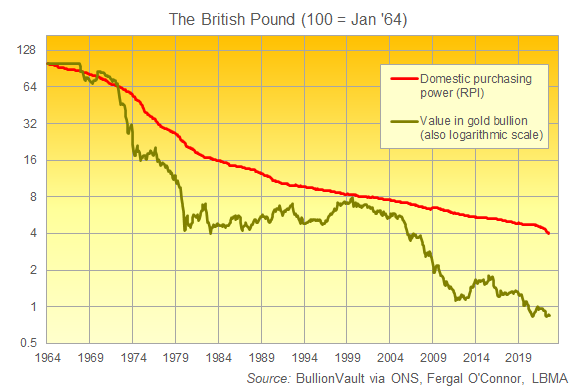 Yes, the value of Sterling in gold bullion has rallied a little from time to time. Indeed, it doubled between 1980 and 2000, meaning in other words that the gold price halved in UK Pounds.
Yet across the 11 premierships of the last 6 decades or so, gold has not fallen in nominal terms since Harold Wilson's second term ended in 1976, and it has risen in real inflation-adjusted terms in all but three (Wilson 2, Thatcher, Major).
Over the last 58 years in fact, since Harold Wilson first took office in October 1964, the gold price in Sterling terms has risen by a little over 8.5% annualized.
That beats annualized inflation (on the old RPI measure) of around 5.7%. Gold also beats UK house prices, the totem of wealth and well-being for pollsters and politicos of pretty much every stripe.
Up around 8.0% annualized on average, bricks and mortar show the kind of positive return for the UK's legendary hard-working home-owning classes for which any UK Prime Minister would happily take credit. Boosterish if not populist politicians might also like to take credit for a booming stock market too, and over the last 6 decades of 11 prime ministers (4 of them now since mid-2016), the total return from UK-listed shares comes to somewhere just shy of 8.0% annualized, dividends included.
Again that beats inflation. Again, however, the price of gold in Sterling matches if not tops that uptrend. And no politician of any persuasion – even the Momentum fringe of the Labour left – would want to take credit for that.
Unchanging, unfeeling and utterly inhuman, gold bullion is the very opposite of politically-driven money. No one can control its supply, demand or price (world No.2 consumer market India has repeatedly tried and failed). So while gold as money is now but a distant dream on the wilder shores of economic thinking and op-ed columns, it remains the ultimate two-fingered salute to the fiat currencies which have replaced it worldwide.
Whatever its investment appeal for the individual saver at any given moment, buying gold is always and everywhere a political act, a wilful escape from the managed currencies and all-too human financial systems of post-gold economics. Those two fingers have repeatedly paid off for UK residents wanting to hedge against the ruling politicians of the day.
If there comes a time when political promises and pretence wins out instead, taking credit for a rise in the Pound, house prices and shares as the gold price drops, it hasn't arrived yet.
Who knows? Maybe Liz Truss will deliver a stable Pound, what with her 'help to buy' scheme for the energy market, borrowing £200 billion to keep consumers consuming, plus the "plausible" outlook for 22% inflation in the UK cost of living according to the Bank of England's chief economist today.
Or maybe you should buy gold today. Because like old man Shaw told those honest and intelligent women a century ago, long before Boris Johnson or Liz Truss got anywhere near Number 10, "You have to choose...between trusting to the natural stability of gold and the...honesty and intelligence of the members of the Government.
"And with due respect...I advise you, as long as the Capitalist system lasts, to vote for gold."