END_OF_DOCUMENT_TOKEN_TO_BE_REPLACED

"It was once said that 'gold and oil can never flow in the same direction'."

So wrote 'Another' back before the turn of the century.

"If the current price of oil doesn't change soon, we will no doubt run out of gold."

...then selling gold from our central-bank reserves as inflation vanished, borrowing costs sank, and the DotCom Bubble inflated.

The oil price? Back in late 1997, it was less than $20 per barrel in Dollar terms, pretty much the cheapest in history once you account for inflation. 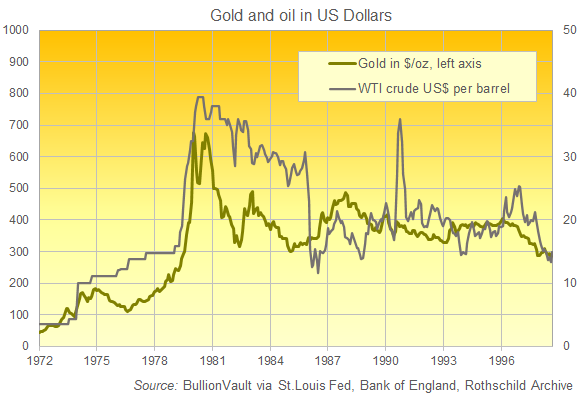 As for Another, no one knows his (or her) identity. Or at least, no one who's telling.

This anonymous voice on the internet hung out on little-known comment threads and blogs where no-one used their own name if they could call themselves Aristotle or Beetlejuice or Vronsky instead.

Another was a key figure in this small but highly engaged private-investor chatroom world. That community began talking up gold just as the price got ready to bottom at the cheapest in 2 decades – down 80% in real terms from the 1980 peak – unloved by everyone else except eager jewellery consumers.

Out there on the fringes of the internet when it still had a capital 'I', Another came on like a kind of Deep Throat revealing the Watergate Scandal to Woodward and Bernstein, hiding in the dark at Parking Lot 32D...

...and sharing what certainly felt something like 'insider' insights to his disciples...

Click down those rabbit holes at your peril. People stumble on this stuff for the first time and vanish like they flew into the Bermuda Triangle.

"[The oil-gold] line of thinking is very real in the world today but it is never discussed openly. You see oil flow is the key to gold flow. It is the movement of gold in the hidden background that has kept oil at these low prices. Not military might, not a strong US dollar, not political pressure, no it was real gold. In very large amounts. Oil is the only commodity in the world that was large enough for gold to hide in."

...only with gold being used surreptitiously to buy oil from the giant Middle East producers, thereby keeping a lid on the Dollar price of crude.

Wild theory? Just more BS from some anonymous guy on the net? 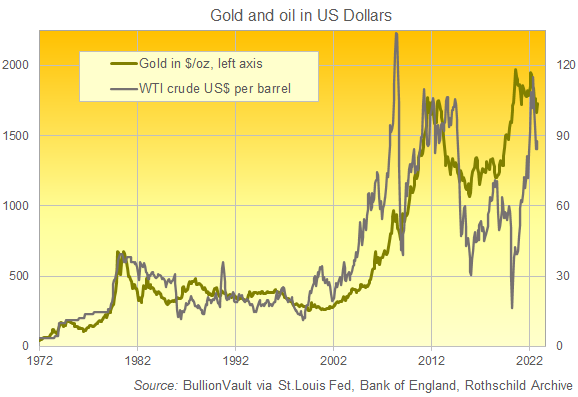 Chart of gold vs. crude oil both priced in US Dollars. Source: BullionVault

Both gold and oil prices broke sharply higher not too long after Another shared his thoughts.

Fast forwards 25 years, and a modern-day guru at a Swiss bullion bank and wealth management group is now saying the same. Or nearly. Kind of.

"We are witnessing the birth of Bretton Woods III...a new world (monetary) order centered around commodity-based currencies in the East that will likely weaken the Eurodollar system and also contribute to inflationary forces in the West."

Crazy but not impossible, given the financial sanctions hitting Russia over its dreadful invasion of Ukraine, plus the well-known sanctions-busting gold for oil deals done over the last 10 years by fellow pariah-state Iran via Turkey.

"We are not espousing the idea, but we can't rule anything in or out," as Rhona says.

So "just for fun" she has crunched the numbers to see how much gold it would take to buy Russia's annual oil and natural gas output...

...and even at $60 per barrel of Urals blend (the new US-EU-G7 price cap for Russian oil) it would cost a whole year of global gold mine production if bullion were trading at $1650. Or it could take 13 months of total global gold mine output even with gold at $2150 if oil trades up to $90.

"Mwah-ha-ha-ha!" laughs President Putin. "Now no one can buy my oil and gas. There's not enough gold in the world!" 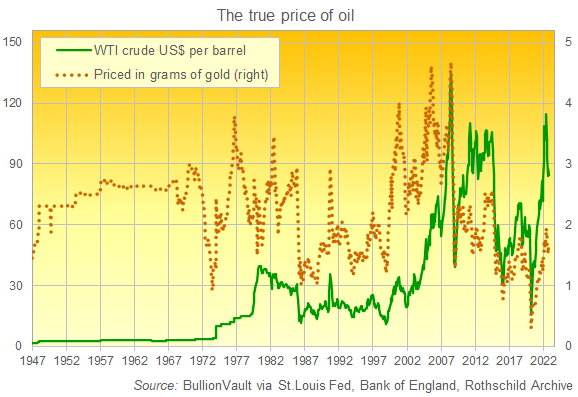 You might recall that back when Russia first got whacked by new sanctions for invading Ukraine this year, the central bank in Moscow offered (very briefly) to buy gold from domestic mining firms at a fixed price in Rubles.

...just as the Dollar accelerated its already steep ascent versus the rest of the world's currencies to reach its most valuable since the start of the Millennium.

Still, because oil remains a vital component of everyday life, pricing it in gold is sometimes used by some gold salesfolk to try proving gold's unique value.

Somehow, squinting at some version or other of the chart above, they claim that owning gold would make your energy bills much less dramatic across the long term. Which is true if you don't look back to, say, the early 2000s...

...nor to the 60% cost inflation which gold owners wanting to go for a drive suffered again between, say, autumn 2011 and summer 2014.

Pozsar's new take is a variation on this theme, with Urals crude – which already tends to trade at a steep discount to European Brent or US WTI because of its 'sour' content against those 'light' benchmarks – now capped for Western buyers at $60 per barrel by the latest sanctions.

That is roundabout 1 gram of gold at current prices.

So never mind that the $60 cap is already $5 higher than today's market price for Urals crude.

Never mind either that Russia already has all the gold it could want for as long as it can't go shopping with that gold but only accept it for oil (it needs microchips much more. Chips that work) thanks to being the world's No.2 miner and the No.5 national central-bank reserves holder.

And never mind that, in trying to de-throne the Dollar through crude oil, any foreign power would have to overlook the biggest change by far in that nexus during the 21st Century to date...

...which is that the USA, thanks to the post-$150-per-barrel boom in shale, has become a net exporter of oil for the first time since the 1940s.

Still, the rest of the world's oil supplies do seem to keep Old Man Biden awake at night. Which is why he's started making nice again with the murderous Nicolas Maduro of Venezuela, inviting the oil-rich dictator to make deals and re-enter polite society. (Maybe someone should send the memo to the UK Government and the Bank of England, still refusing him access to gold it holds for Caracas in London.)

Pozsar's thesis also takes in China and India, as well as the United States' own strategic petroleum reserves, run down earlier this year as President Biden released some of those stockpiles to stop oil prices spiking higher still as Russian tanks rolled towards Kyiv.

For the full story, you'll need to chase down the details yourself on the web. But like Rhona O'Connell at StoneX says, we can't rule anything out. And Moscow is far from alone in wanting to circumvent the USA's almighty monetary hold via the Dollar.

Maybe gold could play a role?

Or maybe the dictators in Beijing will win out, pushing to pay for China's own energy imports with Yuan instead of gold?

Gold as money sounds great to anyone selling something. But to the buyer? Who wants to part with bullion for everyday expenses when they can spend Dollars, Rubles or Yuan...freeing themselves of all the political risk those currencies carry at the same time as acquiring real stuff with fiat money?

Well, who apart from the government of Ghana...now messing up so badly it's become desperate to pay for anything it can get with the gold its taking in exchange for worthless Cedis from domestic miners...?