END_OF_DOCUMENT_TOKEN_TO_BE_REPLACED

Horse-drawn hilarity...
CLIMATE CHANGE activists brought parts of central London to a standstill last week, writes Adrian Ash at BullionVault.
The oil price meanwhile rose to new 6-month highs.
The rational thing to do might seem like selling any and all exposure to fossil fuels from your investment portfolio.
Long term, alternative energies look set to replace fossil fuels...
...from solar panels (filled with ever-less silver)...
...to hydrogen fuel cells (offering  hope for platinum demand as diesel autocats slump).
Oil-rich Norway, for instance, has been thinking about cutting all fossil-fuel investments from its $1 trillion sovereign wealth fund.
But Oslo decided, for now, to dump only $7.5bn of oil and gas exploration shares instead.
Maybe that's because what seems rational long-term might mean a lot of pain right now.
And besides, what's rational today might seem less clever tomorrow.
We're thinking a lot about 'rational' investing here at BullionVault this week.
Because next weekend will mark 20 years since the UK's then finance minister, Gordon Brown, made the perfectly rational decision to sell over half of Britain's national gold bullion reserves.
Everyone else was doing it. Gold prices were the lowest in nearly 2 decades. And like the New York Times famously asked, who needed gold when you had expert central bankers like Alan Greenspan?
Irony soon decreed that, in fact, everyone needed a little gold...
...at least in their personal portfolio...
...if they wanted to preserve their savings from, first, the DotCom Crash and then, within a decade, the global financial meltdown.
So no. Gold at the end of the 20th Century wasn't replaying the horse at the end of 19th...about to get smashed and become irrelevant as humanity moved forwards.
But what about oil and gas today?
"Unfortunately, sometimes I have to fly, but I don't fly nearly as much as I did because of my carbon footprint and I plant a lot of trees."
So said Oscar-winner Emma Thompson last week, showing her support for this month's Extinction Rebellion protests in London by flying in from Los Angeles...
...first class, naturally (if with embarrassment)...
...on a flight emitting around 5.7 tonnes of carbon per passenger...
...before emitting some extra hot air all of her own.
At least 16-year old Greta Thunberg took the train from Sweden ( maybe 0.25 tonnes per passenger in total) to get both a round of applause from UK politicians and a drive-by smackdown from the self-appointed idiots of anti-political correctness outrage.
Away from that noise, meantime, one rational cause for crude oil's pop to 6-month highs looks like US President Trump's sanctions against major oil exporter Iran.
Starting May Day 2019, the US will now sanction any country caught buying oil from the regime in Tehran.
China says it doesn't care, while India is caught between trying not to upset either Trump or Tehran.
"Why isn't gold reacting to the Iranian oil debacle?" asked India's ET Now last week. It could ask the same today of once-major oil exporter Venezuela, apparently tipping towards civil war.
"Like, why would it?" was pretty much our response then and now. "At least in the short term." 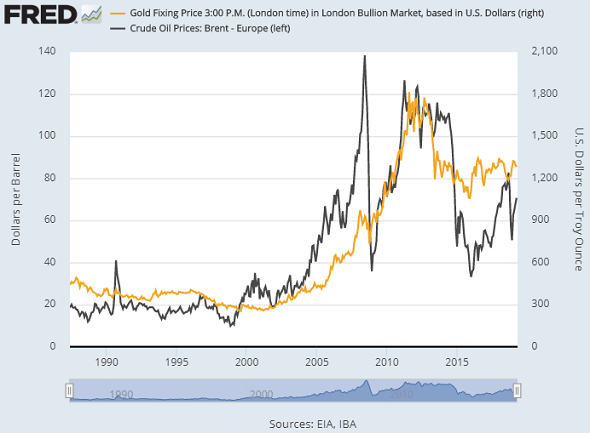 Week to week, the price of gold and the price of oil have gone in the same direction just 57% of the time over the last 30 years.
On 3-month periods, that connection only rises to 58% of all 13-week periods...
...but on a 1-year basis, gold and crude since the late 1980s have moved together 63% of the time across all 52-week periods.
Give it time, in other words.
Back in the White House meantime, Trump wants to hurt Iran's leaders but he also wants cheaper oil prices...
...demanding that the Opec cartel of major producers boost their output to plug the gap he's creating by trying to ban the world from buying Iranian crude.
The US summer driving season now looms, after all. And after that we'll get the circus of US 2020 election nominations and then campaigning.
Back with rational thinking, Trump's strongman fight against the United States' enemies is tough to square with cheap fossil fuel energy.
"Researchers are finding that low inflation is in large part a consequence of globalization or automation or deunionization, or a combination of all three," says the hilarious BusinessWeek magazine cover, asking "Is inflation dead?"
Globalization in particular looks a strong suspect, most of all because automation and de-unionization flow from it.
Protectionism therefore looks likely to revive inflation, because it blocks the free flow of capital, labour and goods working so hard to cut wage-bargaining power in the rich West since China joined the WTO at the turn of the millennium.
Still, central bankers suddenly seem to think inflation is less of a worry too.
With just 2 days to go, April 2019 looks like the first month since 2015...
...when the US Fed began raising its key interest rate from emergency levels of zero...
...that no central bank anywhere has raised its cost of lending.
The Czech National Bank might then throw a kink in this trend if it does raise rates on Thursday.
But that would make the CNB a lone voice right now. Whereas the growing consensus is what? Rational or ironic? The horse-drawn carriage or Gordon Brown?
Maybe we should all start worrying about inflation making a comeback.