END_OF_DOCUMENT_TOKEN_TO_BE_REPLACED

Whole gamut of 'gold is money' clichés vs. MMT...
POOR Judy Shelton! sighs Adrian Ash at BullionVault.
You flip and you flop, saying whatever a politician might want from a PhD in business admin, if not an economist...
...yet still no one trusts you anywhere near running the US Dollar into the ground.
"I oppose the nomination of Judy Shelton," said Republican Senator Lamar Alexander in a statement Monday last week.
That put the kybosh on outgoing President Donald Trump's pick for filling the empty chair on the US central bank's policy team.
Because with two other Republican Senators also opposing Shelton, plus two more stuck at home in Covid quarantine, that meant Senate Majority Leader Mitch McConnell's rushed vote to approve her nomination failed, 47-50.
"Her nomination could be brought up again," smirks the LA Times, " but it shouldn't be."
Why not?
"I am not convinced that she supports the independence of the Federal Reserve Board," said Alexander.
And it's true. Shelton did indeed say that the US central bank should "pursue a more coordinated relationship with both Congress and the President" when she first pitched for the empty Fed seat in September last year, clearly trying to win Donald Trump's favour against Fed chairman Jerome Powell.
But if you don't like that opinion, she has others. The exact opposite, for instance.
Whaddya need?
"Not surprisingly, the countries that enjoy the lowest levels of inflation are those where the central banks enjoy the most independence from governmental coercion."
So wrote...erm...Judy Shelton in 1994.
How best to get that independence?
"To choose a gold standard is to insist on outside discipline to ensure the long-term integrity of the value of money."
Ah, okay. Thanks for calling. Next candidate please! 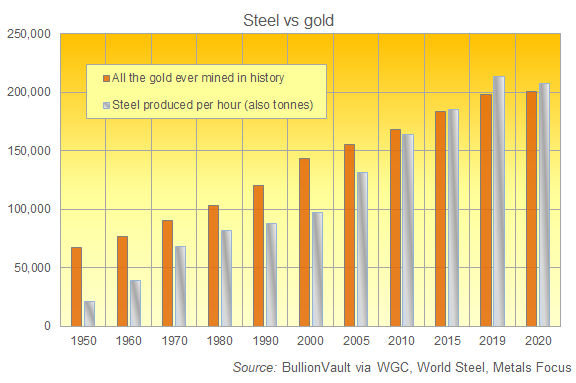 Gold is certainly scarce.
Since 2015 for instance, the world has produced more steel every hour than it has ever mined gold in all of history.
But rarity is only one attribute of money as it is taught to school children today...
...and in the real world of grown-ups, scarce money is the exact opposite both of what we've got and of what is coming our way.
So while 2020 has seen heavier investment flows into gold than any previous year on record, the idea of returning to some kind of gold-backed money for official currency looks as likely as humanity abandoning the car to use horse-drawn carriages instead.
Shelton can flip and flop whichever way the wind blows today, but 26 years ago she wrote a book urging a return to gold-backed currency. So as she well understands, she now has little chance of ever getting inside the Eccles Building, because she is " sort of tagged with this gold bug idea."
Sort of? Money Meltdown was already out of time like a bubble perm on top of a mullet when it first appeared in 1994. It came more than 20 years after Washington finally shook its gold habit on behalf of the world, and it was more than a decade after the Gold Commission convened during Ronald Reagan's first term found against returning to gold.
Shelton's book also ran the whole gamut of "Gold is money!" cliches, from a prelapsarian faith in the magical power of metal-backed money...

"Not to maintain sufficient inventory to preserve the integrity of the currency is an act of fraud."

...to touching naivety about how the world works...

"Some would argue that even a gold standard leaves money too vulnerable to the actions of government officials."

...through to economic and historical claims so bold, they're disingenuous at best...

"A monetary standard that delivered sound money would certainly alleviate the social tensions that divide people into classes – creditors versus debtors, wage earners versus financial speculators."

Expect more of this lazy talk...much more...in 2021, and not just from Shelton (if she dares speak up at all or doesn't continue flipping the other way).
You see, next August will mark 50 years since Tricky Dicky Nixon cut the Dollar's final tie to precious metals, "closing the gold window" at the Treasury so that foreign governments could no longer turn their greenbacks in for gold.
If you think rewinding Nixon's move would be a good thing, you'd better hope for stronger advocates than Beltway hacks like Shelton.
Nathan Lewis, for instance, is a big gold standard fan who has actually studied the subject...its history and application...like few other people we know.
Perhaps only monetary historian and economist George Selgin has thought about it more deeply. And while not a confirmed 'gold bug' by any means, Selgin at least knows enough not to dismiss the idea out of hand.
But outright rejection by the world at large is still guaranteed as we mark next August's half-century since 1971.
That's thanks in good part to the lazy thinking, woeful history, and personality politics of most Gold Standard advocates. (See this 2019 interview with Shelton for instance, to learn just how confused and confusing she is on the topic.)
The other part of 2021's looming rejection of any kind of gold standard comes from the lazy thinking, woeful history and personality politics of its opponents. Plus the fact that, as the 'gold bugs' repeatedly say, "The gold standard...worked because governments were much smaller than today, about 10% of GDP."
And like scarcity in money, small government is not where we're headed any time soon, if ever.
"There are no constraints on the [government] budget...We don't need to tighten our belts with shared sacrifice and fiscal restraint...citizens should never be forced to suffer harsh austerity on the grounds that the government lacks the ability to pay for health care or pay benefits to retirees or the disabled."
So says Stephanie Kelton, darling of the big-spending 'left' and leading advocate of the Gold Standard's direct opposite:

"If we wanted to, we could pay off the [national] debt immediately with a simple keystroke," writes Kelton in The Deficit Myth, now clogging up bookshelves, review pages and policymakers' Christmas reading lists worldwide.

"The entire national debt could be paid off tomorrow and none of us would have to chip in a dime...We just need to print more money."

Really? Is it that simple?
Yes, says Kelton. And you'll never guess why.

"The Dollar is no longer tied to gold. The US issues a freely floating fiat currency so it doesn't need to tax or borrow before it can spend."

So there you have it. Gold was the problem, and 50 years after Nixon kicked it out of the monetary system we should wise up and move on, choosing instead simply to print! Print! PRINT! Until inflation takes hold. Policymakers will then raise taxes, take the heat out of the economy, and set the ship of state to rights again. You know, just like they never did in the past.
I'll leave you to look and read up on MMT for yourself. Reader discretion is advised, plus a stiff drink. But fore-warned is fore-armed, perhaps. Which, with Kelton and MMT more broadly taking the policy spotlight, might explain why, with jewelry and industrial demand for gold collapsing as scrap recycling rose in 2020, investment demand for the metal has jumped to this year's historic record. 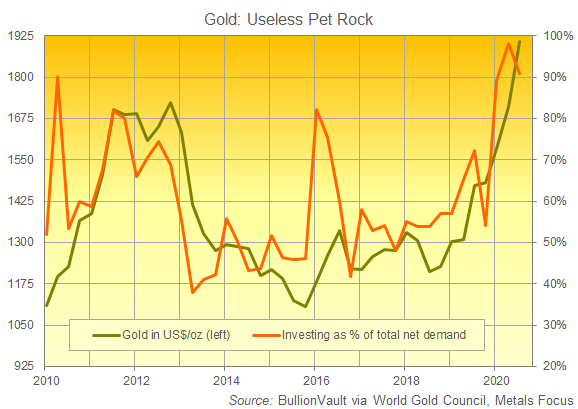 Indeed, as our chart above shows, pretty much all net demand for gold in 2020 has come for gold as a bars, coins, central-bank reserves or ETF backing.
No, this surge doesn't suggest any move towards any kind of gold-backed money either. Quite the opposite in fact.
Because as George Selgin recently said, taking the temperature of our modern world while looking at history, "I believe very strongly that the claim that money is a 'Store of Value' is one of the great errors of monetary theory."
Gold, in other words, can be a store of value (and that is what humanity uses it for) without any pretence of it returning as money.
"Of course," Selgin adds, "money must have some such capacity [of storing value] to be useful; but that is just another way of saying that it mustn't be too perishable to be a convenient means of exchange."
As 2021 draws near...bringing with it the utter victory of Kelton over Shelton in the opinion columns and policy debate as sovereign deficits continue soaring to new peacetime records...just how perishable does your money look today?