END_OF_DOCUMENT_TOKEN_TO_BE_REPLACED

Gold buying jumps, gold selling leaps on price rise...
GOLD MARKET trading has shot higher so far this week, writes Adrian Ash at BullionVault.
Over the 24 hours to teatime Wednesday in fact, gold trading volumes on BullionVault rose 305% from their previous 365-day average, reaching $5.5 million.
Gold buying drove a good chunk of that growth. Demand jumped over 92% from its 1-year daily average.
But private-investor selling rose faster...leaping by 489%...totalling nearly $5.2m worth of bullion from 5pm Tuesday.
And why not sell? Gold prices on Wednesday morning hit $1344 per ounce for US Dollar investors.
That offered a 16% gain from last summer's lows and $100 more than the last 5 years' daily average.
Euro gold meantime hit 2-year highs...
... Aussie Dollar gold hit fresh all-time records...
...as did  Shanghai's benchmark gold fix...
...and the gold price in British Pounds per ounce hasn't reached so high since Trump won the White House as the UK reeled from its shock Brexit referendum result of mid-2016.
At the same time however, all signals say gold prices are right to be rising.
Indeed, you might expect the gold market to stand higher already from today's top.
Because other things equal, gold prices often move inverse to interest rates...
...nearly two-thirds of the time since 1969 on a monthly basis...
...and interest rates have of course collapsed in spring 2019 as investors have fled into the safety of government debt.
Looking at US Treasuries (and putting the impact of inflation to one side), the yields offered to investors on Washington's 2- and 10-year bonds have retreated by more than a quarter from this time last year.
The 5-year yield has shrunk by almost one-third since June 2018.
Previously when the nominal rate of interest offered by 5-year T-bonds shrank that fast from 12 months earlier, the gold price on average showed a 15% gain from the same starting point.
Yet the out-turn today? Gold shows a mere 3.9% rise since this time last June. It would trade above $1480 if that average response to plunging bond yields since 1969 applied. 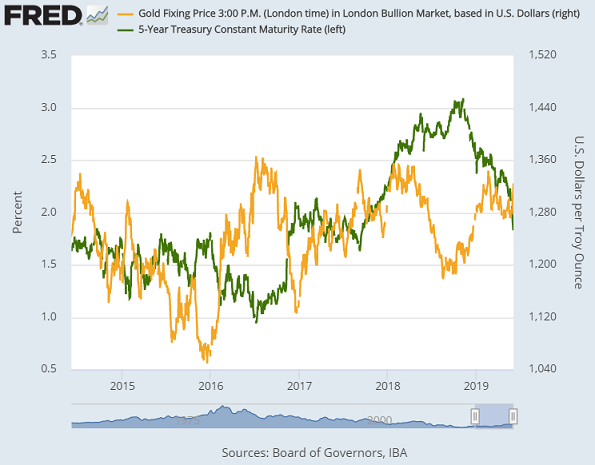 So who's right – gold buyers or sellers?
Short term they'll no doubt both get to enjoy the same cycle of relief, worry, regret and 'whatever' that every investor gets after any decision, watching prices flick higher, lower, lower, higher...until boredom kicks in.
But further ahead they can't both be wrong. Not where it counts when they tally up the impact of buying gold – or selling it – on their long-term wealth.
Against today's falling interest rates, gold is perhaps capped by the stock market. Equities remain pretty perky near this year's fresh record highs, especially given the weight of doom and gloom weighing upon investors.
The Dollar itself has also held strong over the last 12 months, offsetting the gains in gold enjoyed by non-US investors by rising almost 21% against a basket of the world's other currencies.
But here again, and just as in gold, investors are split about what to do in other financial markets.
"US equity markets are very vulnerable right now," says one respondent to the latest weekly sentiment survey from the American Association of Individual Investors.
It finds that 40% of US investors now expect stocks to fall over the next 6 months.
"We're toward the end of a cycle," that worry-wort goes on. "It's the best time ever to diversify away from US equities."
And when the credit cycle turns, losses in US leveraged loans will near 7%...and reach 7.5% on high-yield debt...reckons Swiss bank UBS's head of credit strategy Matthew Mish.
"He estimates that speculative-grade losses could approach $455 billion, or 2.2% of US GDP," says Lisa Abramowicz at Bloomberg, pointing to UBS's latest report.
Yet $1.5 billion went into the biggest US high-yield bond ETF Tuesday, Abramowicz also notes of the iShares iBoxx product (NYSEArca: HYG) – the " largest one-day flow ever" into that higher-risk debt fund.
And it's not like worries over high-risk corporate bonds are new. "UBS explains why the next credit unwind will be unlike anything we've seen before," screamed ZeroHedge in August 2017. Before that, "UBS and Moody's join high yield bears," said the Financial Times in April 2016.
Since then HYG has risen 5% in price, paying around a 5% annual yield on top.
"Bearish sentiment is now at an unusually high level," the AAII meantime says of its survey of equity investors, "while bullish sentiment remains at an unusually low level."
You might take that as a contrarian signal...selling gold and picking up stock in US Inc. at roughly twice its historic average cost in terms of price-to-earnings.
Or you might just conclude that in stocks – like in high-yield debt and in much less favored bullion – both today's buyers and sellers will likely get to be right for a while.
Further ahead lies the real remorse for making the wrong move. Because, while today's gold price is higher from recent levels, it is only a starting point for what comes next.