END_OF_DOCUMENT_TOKEN_TO_BE_REPLACED

Independence a big issue as LBMA conference hits the Catalan capital...
THIS WEEKEND kicks off the precious metals chit-chat and all-round fun-fest of the bullion market's key industry event, writes Adrian Ash at BullionVault – the annual LBMA conference...
...cleverly timed this year to take place in Barcelona.
You'll find all the breaking news and views from the world's premier gold, silver and platinum conference here on GoldNews and live on Twitter. Including the ever-popular crystal-balls game of getting 700 or so industry insiders to say where they think the gold price will stand by the time of next year's event... 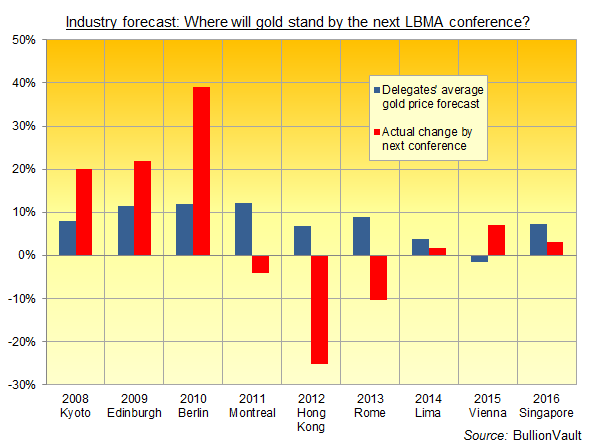 More luck next time, right? Or maybe keep an eye on the Barcelona forecast for October 2018...and use it as a contrarian indicator. Or maybe just accept that a crowd will, in aggregate, tend to forecast a 5-10% gain over the next 12 months, unless the previous 12 months really moved prices.
As for the host city, no doubt everything will be fine...as your correspondent has to keep telling his mother.
Even the airport, hit by recurrent strikes over pay (unrelated to the recent turmoil over Catalan independence) is apparently running smoothly.
Beyond that, we can't offer any insight on north-east Spain's would-be breakaway republic.
But the question of independence will likely run through the LBMA conference as well. And not for the first time. Here's your hot headline-news round-up...
Split! Long cut out of the multi-trillion bullion market, the London Metal Exchange this April launched new gold and silver contracts, backed by the mining-industry's World Gold Council and a small group of LBMA-member banks, including newcomer clearing member, China-owned ICBC Standard Bank. Widely headlined as a "competitor" to London's dominant model of buyer-to-seller private deals, how independent is this alternative, given that clearing still ends up with the dominant over-the-counter bullion banks (including ICBC Standard) in the end anyway?
Unite! Forced to take charge of the century-old process for Silver, Gold and Platinum price fixings in 2014, the LBMA's executive team gave the running of those benchmarks to independent administrators...splitting the 3 markets between 3 providers. Divide and rule? If ever it were, that would seem less likely now chosen gold-provider ICE is also running silver.
Challenge! China...the world's No.1 gold miner, importer and consumer nation...launched its own independent daily benchmark price auction 18 months ago. But can Shanghai break London's dominance if metal remains locked in the country by Beijing's bullion export ban?
Secede! India is planning its own Good Delivery standards for gold bars, apparently independent of London's world-leading system. What does that mean for the global trade in 0.995 fine LGD bullion?
Unify! The world's No.2 consumer gold market, India is also reviewing an official bullion exchange for wholesale inflows as well. But does this risk a loss of independence for the domestic industry from New Delhi's bureaucrats? Not least those 'grey' flows which keep filling the gap created by the government's drive to reduce legal gold imports and demand?
Submit! The LBMA itself has launched a new Precious Metals Code for its member to adhere to, and it's working to give UK regulators more information and more insight to the global market which finds its centre here. But can that slow or divert the regulatory juggernaut steam-rolling financial markets everywhere?
Brexit! The UK's own civil war will no doubt raise cheers and boos from gold's London-based traders to match Catalonia's separatist and unionist shouts at next week's conference. The EU's regulations on chemicals shipments (unamusingly called Reach) caught the market napping back in 2009. Mostly because precious metals are inert...and so no one in their right mind would have thought they counted. But what will the UK's independence from Europe means for the world's central bullion storage and dealing point? ( Hint: Very little, if anything.)
Dialogue! Most notably, the LBMA is seeking some level of independence for bullion banks and the global supply chain which they help finance from the dreaded NSFR rules which account gold on a balancesheet at just 15 cents in the Dollar, making the business of lending metal simply unworkable.
Representation! Finally for the LBMA (for now), some UK members of the Association are apparently mulling an independent group to address their UK-specific issues. Less a breakaway splinter group than headline-writers might wish, it does suggest that the name "London" doesn't properly cover what the "Bullion Market Association" does.
Independence! And finally for precious metals prices and investors (who might well wonder what all the above spats and jaw-jaw have got to do with them), have world stock markets really gained the independence needed for central banks to start raising rates and removing QE...or will this 2017 attempt at 'talking tough' prove just a fresh banana skin before a new crisis leads to new bail-outs and monetary inflation? Do central bankers have any hope of not being in thrall to the stock market the moment it hits trouble again?
Bonus exclamation marks: Blockchain gold!! While crypto-currencies promise independence from government fiat and central-bank control, the rise (boom, bubble etc) in Bitcoin is busy luring in new buyers with the promise of instant financial freedom. But the distributed ledger technology behind BTC and the rest also promises independence from a single, centralized exchange or record-keeper for financial trades, including gold.
So far, so what? If you need a series of separate ledgers to record your transactions in gold, because you don't trust a bank or vault operator to keep a bar list, why would you trust them to keep your gold? And if you got a 400-ounce bar for every press release headlined "Blockchain! Gold!" which then came to nothing (so far), you would now have lots more gold than the Bundesbank keeps in Paris. Because it doesn't keep any metal there at all any more.
Germany's Buba does still keep some gold in New York, and – of course – in London. The City's vaults, expertise, banking services, free trade, legal protections, central timezone, long history and low costs make it the No.1 market today. Who would really want out? Why?
All this and lots more to come at the LBMA conference in Barcelona next week. Provided the airport and shuttle bus are running okay.