END_OF_DOCUMENT_TOKEN_TO_BE_REPLACED

Gold investment has receded in 2013. But money could flow back as quickly...
WHICH number is greater? wonders Adrian Ash at BullionVault.
The number of economists who were "the only person to forecast the financial crisis", or the number of people who claim that they alone dreamt up the idea of gold ETFs at the start of last decade?
Either way, the crisis struck, and gold ETF holdings leapt as investment money flowed in... 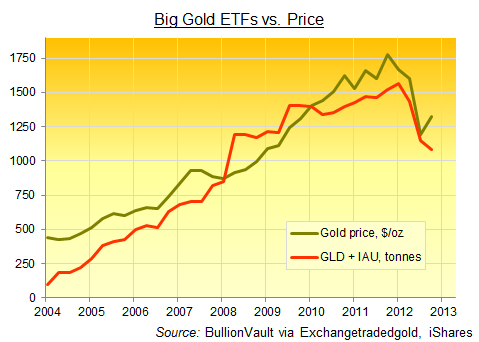 "In a sense," says a note from Swiss investment bank and London bullion-market maker UBS, "these [2013] out-flows are a reversal of the trend that occurred five years ago when gold ETF investment – particularly in the GLD – increased sharply.
"Back then, concerns over a weak US economy and the impact of QE on inflation were key motivators driving investors towards gold ETFs. With the macro outlook shifting this year, those positions are now being unwound."
The impact on global supply and demand in 2013 for gold has been dramatic. Because these exchange-traded gold products – legal trusts whose debts are denominated in gold bullion, and which then own physical bullion to back their shares' value – have flowed from one side of the ledger to the other.
Adding an average 45 tonnes to their collective hoard every 3 months as investment flowed in between 2005 and late 2012, the giant SPDR Gold Trust (GLD) and its smaller competitor from iShares (IAU) have turned net sellers this year. Together, they've sold back some 160 tonnes per quarter, accounting for two-thirds of 2013's total gold ETF liquidation of 700 tonnes.
What goes up, right? Well, yes. The ETFs revolutionized how institutional investors, most especially US mutual funds who can't own physical property, could access gold price exposure. No, these shareholders don't own gold. No single gold ETF product is open for trade 24/7 either. Nor do they offer a choice of vaulting locations. Settlement to a broker takes 2 or 3 days, rather than being instant. Such benefits are, for the moment, restricted to private investors seeking the smartest way to buy gold outright.
But for those institutional investment dollars which otherwise had to chase mining stocks or play the futures market, gold ETFs provided cash-price exposure, and also took physical metal off-market to keep in allocated bank accounts instead. And fast as this year's second-quarter liquidation was (285 tonnes from the GLD and IAU alone), the peak accumulation on the way up was faster (348 tonnes in Q1 2009). 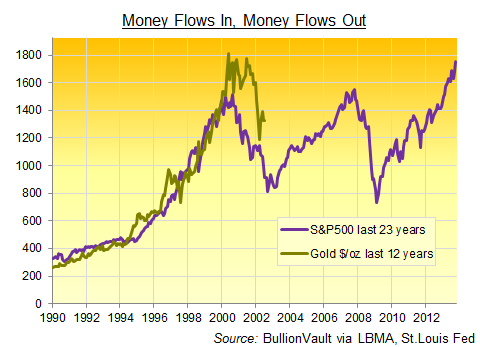 Where next for gold investment flows then? The world is awash with money. Inflation cannot dent gold, nor can credit default tarnish it. But whether or not inflation shows up or crisis returns soon, the money of Western households being run by the City and Wall Street needs a home. So does the pile of rich Western promises held by emerging-market central banks. Right alongside the fast-growing savings of their fast-growing middle classes.
Stocks have now offered managed money a very warm welcome 3 times in the last 15-odd years. Gold, to date, has surged and peaked out as well, but once. Investment dollars have now ebbed out of gold for 12 months after flooding in for 12 years straight. With interest rates stuck at zero, and QE money printing the only monetary tool left to hand, there's little beyond sentiment, perhaps, to stop a flood of fresh money washing back in.