END_OF_DOCUMENT_TOKEN_TO_BE_REPLACED

Gold investment shunned so far by private bank clients wanting income in low-to-negative rate world...
GOLD INVESTMENT is set to keep growing into 2017 says a new report from leading analysts, because the financial and economic backdrop to this year's "remarkable" return of Western money managers to precious metals is set to continue.
The price of silver, platinum and palladium will likely rise faster however, the research says, with the three white metals attracting "speculative" money, offering "value" relative to gold, and enjoying "healthy fundamentals" respectively.
"Investor confidence in precious metals is forecast to continue improving next year," says the new Precious Metals Investment Focus 2016/17 from London-headquartered consultancy Metals Focus, "as factors that have encouraged investment so far in 2016 remain in place."
Most crucially – and despite a "creeping" upturn in US inflation – the slowdown in economic growth will likely cap any Federal Reserve rate hikes, making "negative real interest rates...the norm" yet again, says the 90-page report, launched at a event sponsored by London refiners and bullion merchants Baird & Co. on Wednesday evening.
Led by "the realisation that US rates would remain depressed for longer and concerns about global markets and the economy," said Metals Focus director Nikos Kavalis, "the change in investor sentiment towards gold has been nothing short of remarkable."
But while investors have "returned to the gold market in force," he went on, "many of those investors that were heavily involved in the 2009-11 rally are still absent.
"There is plenty of scope, therefore, for further investment inflows into gold."
Speculation in Comex gold futures contracts has leapt in 2016, with the non-commercial and non-reportable categories of players outside the bullion industry flipping from a near bearish position overall last December to new all-time bullish records this summer. 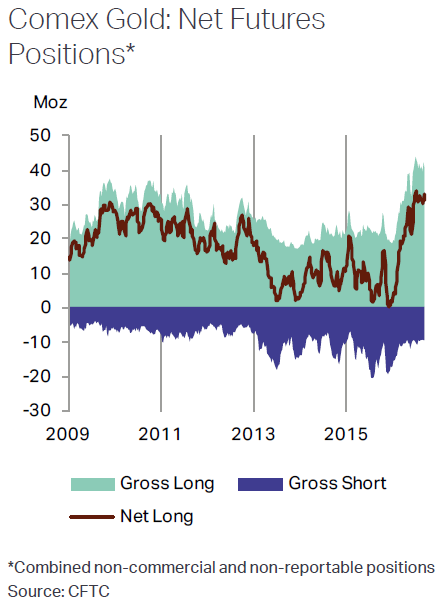 Stockpiles of gold held in Comex-approved US warehouses have meantime grown by two-thirds so far this year from end-2015's decade low, data from Reuters show, while bullion held to back the value of shares in exchange-traded trust fund products grew by 40% to the end of August from December's 7-year low according to ETF figures compiled by mining-backed market development organization the World Gold Council.
Holdings for gold ETF market leader the SPDR Gold Trust (NYSEArca:GLD) reached a 3-year high in July, slipping back to 949 tonnes this week but remaining 48% larger from New Year.
For professional investment managers, said Kavalis, today's low to negative bond yields and interest rates remove a major objection to holding precious metals, which pay no income.
Yet private bank clients – a segment which grew its gold holdings dramatically during the global financial crisis' peak of 2009-2010 – have so far failed to return in 2016, he said.
"Out of 100 phonecalls we get from clients," added a private banker during the Q&A after Kavalis' presentation, "only one is about gold. The other 99 are about income [paying assets]."
Meantime "at the retail level," Metals Focus' new report goes on, "demand for coins and small bars has been lacklustre [in 2016, with] a marked slowdown between the first and second quarters, a trend which is likely to continue in the coming months [on] growing disappointment in regards to gold's rangebound trading since early July."
Investment interest in gold-mining equities has leapt in contrast, as "rising gold prices and the reining in of costs have helped gold miners push [profit] margins to three-year highs," says Metals Focus, "contribut[ing] to a growing appetite for mining stocks."
The HUI Gold Bugs Index of miner stocks "captures this trend" says the new Precious Metals Investment Focus 2016/17 – which also includes brief background guides to key precious-metals market features and factors, plus an introduction to the world's largest gold, silver and platinum-group mining companies – touching a 3-year high this summer after trading volumes in January to March hit the highest level since the start of 2008.