END_OF_DOCUMENT_TOKEN_TO_BE_REPLACED

File under Sherlock: Gold shows zero investment correlation with stocks or GDP...
SO BUYING GOLD doesn't make a sure-fire hedge against economic or investment turmoil, and never did, writes Adrian Ash at BullionVault.
That, at least, is what Harvard professors Robert Barro and Sanjay Misra apparently claim in a paper apparently set for publication in the Royal Economic Society's Economic Journal.
"Gold has not served consistently as a hedge against large declines in real GDP or real stock prices," says the RES's summary of Barro and Misra's research.
And they are right.
But this is no secret. No one serious ever said otherwise. Economists and investment analysts have long pointed to gold's lack of long-term correlation – neither positive nor negative – with economic growth (see a 2003 paper here), stockmarket returns (see 2002 research here), or industrially useful commodities (see 2011 analysis here).
File this under Sherlock – unless you want to look under the hood and see what gold's utter lack of a solid connection to stockmarket prices might mean for defending your savings.
Barro and Misra have studied US data running back to 1836. We don't yet know why. If the RES paper is a re-tread of their 2013 analysis, then the choice of that two-century period won't be explained, although gold's changing role is examined. Gold was money for the first 80-odd years, when horses were cars and few homes had flushing toilets, never mind telephones. Its price then remained fixed under various Gold Standard look-a-likes to August 1971, again skewing any conclusion from what movement there was.
Either way, "A true hedge would display significantly negative correlation" economic growth and with stockmarket returns, according to the RES summary. But looking at US GDP and US equities, "this study finds that these variables have a correlation of essentially zero with US real gold returns."
Surprise? Only if you believe spreading your risk should be a zero-sum game, and so you make a strawman out of gold's correlation with stockmarkets and economic growth.
I mean, can you see a pattern here? Do you need to? 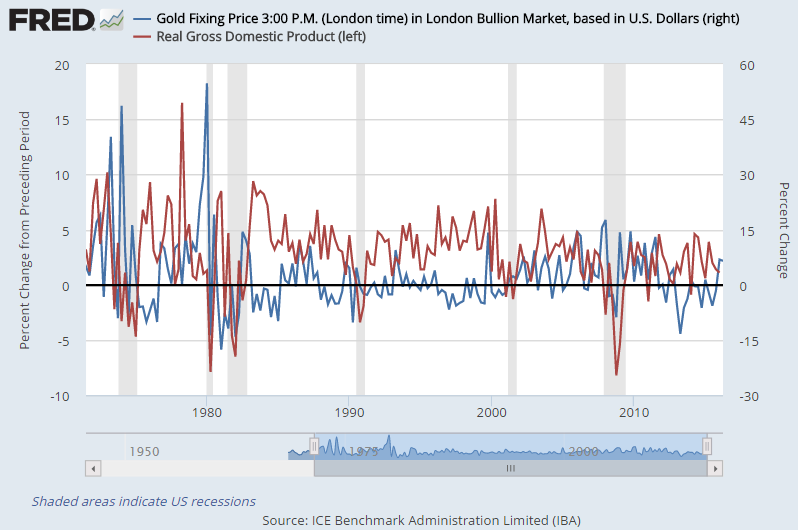 The reason you can't is because there isn't one. Statistically there is zero relationship between gold prices and economic growth. The correlation coefficient, maths lovers, is an utterly inconsequential minus 0.04 – meaning there simply isn't a connection to note.
That's because no – gold doesn't always go up when crisis hits, and it doesn't always fall when the economy booms. This is no secret. Analysts and money managers have long pointed out that gold's correlation with equities is, in fact, across the long term, precisely zero.
Which is what has made gold such a useful hedge for your other investments.
Even amateur hacks, trying to make sense of gold's investment value, have researched and found the same – three times in 2007 for instance – here, here and here – and again in 2014 amongst other ham-fisted attempts.
The same answer keeps coming back. Gold's price performance isn't linked to the economy, nor to the stockmarket. You might think that could make it very useful indeed for spreading risk. And you'd be right.
Here comes the science... 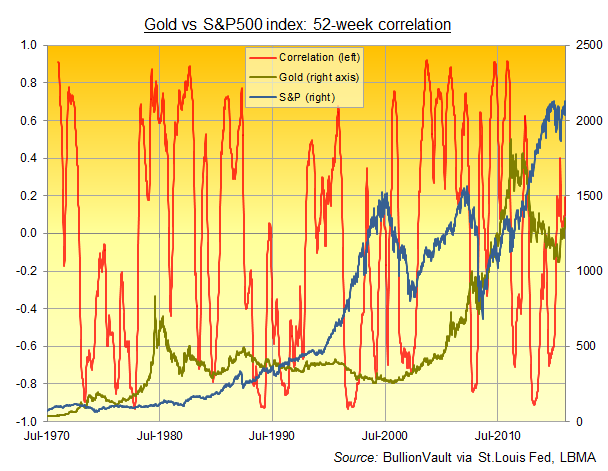 If the correlation coefficient between two asset prices reads +1.0 then they move perfectly in lockstep together. It will read -1.0 if they move entirely opposite across the time period you're looking at.
But what if it's zero?
Priced in Dollars, gold has shown a mean average 4-week correlation with the S&P500 index of minus 0.02 over the last 45 years – about as statistically insignificant as you can get. (The median is -0.04, meaning half of all months were stronger, half more negative). Over longer periods, gold shows an average 52-week correlation of minus 0.04 – again, as close to zero as you could wish (and with a median of -0.03).
But as the chart shows, gold achieves this zero correlation with equities across the longer term by switching from a strong positive correlation to a strong negative correlation time after time.
So it's mathematics, not the true relationship at any given moment, which make gold's longer-term average connection read zero.
In fact, gold's 4-week correlation with changes in the price of America's 500 largest stocks has actually been close-to-zero less than 3% of the time (near-zero here meaning a correlation between minus and plus 0.04). The rest of the time, gold either moves up or down with equities, or it moves opposite.
For longer-term investors who never look at their Profit & Loss, that means it does neither, and that would make it the perfect hedge – precisely because gold hasn't perfectly mirrored the exact movements in US equities.
But there's more, because gold's track record has in fact been slightly better than perfectly uncorrelated. Because when stocks have gone up, its 4-week correlation has been precisely or very close to zero. But that relationship has turned negative when stocks slumped.
In other words, gold has tended to go up when stock investors needed it to.

Research just keeps on finding that "gold not only tends to have a low correlation to many other assets, including commodities, but that this correlation changes during periods of economic turmoil in a way that benefits investors," as pro-gold market development organization the World Gold Council found back in 2011.
Looking over the last 45 years for instance, that gives us 2,350 weeks of data. (Why 45 years? People like round numbers, and July 1971 was also one month before the United States finally abandoned the Dollar's link to gold – freeing the metal's price to move up, or down, rather than holding tight to the official $35 per ounce target decided by President Roosevelt over his breakfast during the Great Depression.)
And over those 2,350 weeks, gold has shown next to no correlation on average with the S&P most of the time – including when shares went up – but it showed a small but marked tendency on average to move the opposite way when equities fell.
Which is pretty much exactly when you would have wanted a financial 'hedge' to go the other way from your more typically profitable equity holdings, no?
Moreover, as the World Gold Council found elsewhere, "Gold tends to protect against so-called tail risks, or events that are not very likely and may not be frequent, but when they do occur they have a significant negative impact on an investor's capital or wealth."
Correlation doesn't signal causation, remember. But that's not an issue to worry about with gold. Because it shows zero correlation with equities anyway.
People buy gold because they think it's a safe haven, another summary of Barro and Mishra's research has put it, but it's "unclear it ever had that status" under the terms they put it under.
Maybe, just maybe, gold isn't 100% perfect as investment or crisis insurance for your other savings.
But can you, or a Harvard professor, point to anything close to a better one?