END_OF_DOCUMENT_TOKEN_TO_BE_REPLACED

Gold prices are surging because big investment, not jewelry demand, is jumping...
GOLD INVESTMENT showing on your radar? asks Adrian Ash at BullionVault.
You couldn't ask for clearer proof of what drives the metal higher or lower.
New figures today show gold jewelry demand worldwide hitting 11-year highs in the back half of 2015. Prices were falling, hitting new 6-year lows against the Dollar.
Today's market action, in contrast, sees gold enjoying its strongest start to a year since the blow-out of 1980, while global stock markets fall harder than...well, than ever.
Who's buying gold, in other words, matters far more than how much they buy. And gold of course matters most when big money-managers are buying a lot. 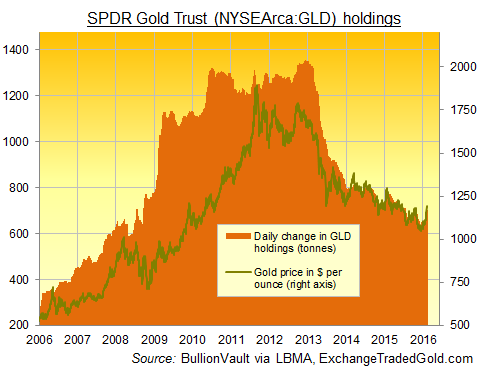 Compare Indian households, for instance. Famously the 'sink of the world' for bullion since ancient Rome complained about the drag it created on the empire's balance of trade, they bought their third heaviest total on modern records in 2015.
That's according to this morning's new Gold Demand Trends report from mining-backed research and market-development organization World Gold Council. The data come from specialist analysts Metals Focus. Jewelry demand in India, the world's No.1 consumer market, "rebounded in the second half of the year," they say, taking annual demand to its highest level since 2010.
World gold prices also reached 2010 levels last year, but only by falling, not rising.
Indeed, "November and December were particularly upbeat" for Indian gold demand, the World Gold Council says, "as Dhanteras (the first day of the 5-day Diwali festival, which heralds the start of the wedding season) was immediately preceded by a drop in the gold price.
"Price-sensitive consumers therefore took the opportunity to make their purchases at lower levels."
Over in China – now vying with India as the world's heaviest consumer-gold market – last year's drop in jewelry demand was slowed by the late-year drop in prices. Fourth-quarter demand slipped only 1% compared to the last 3 months of 2014. US households meantime – the world's third heaviest jewelry buyers – raised their gold necklace and bracelet demand once again, up by 3% from the approach of Christmas in 2014 to mark the 8th consecutive quarter of growth.
Again, that came on the lowest quarterly-average gold price since the end of 2009. You get the picture.
Gold jewelry demand does help support prices, of course. The price crash of Spring 2013, for instance, found a floor at $1180 per ounce as Western investor selling met a surge in Asian household buying. The global market did clear. Only, it cleared a few hundred dollars per ounce below where those Western money managers would have preferred.
Investment demand also features in today's new Gold Demand Trends report for the end of 2015. And looking at gold bullion bars and coins, it shows a 1.1% annual rise, increasing to 1,011 tonnes on Metals Focus' data to account for almost one ounce in every four of total demand worldwide.
That compares with just one ounce in every eight back when gold's first 21st century bull market really got started in 2002. The return of retail investment demand remains a key feature of the global market.
But one other key component of gold investing – demand from money managers using proxy vehicles such as the SPDR Gold Trust (NYSEArca:GLD) – continued to slide from its record peaks of 2010-2012. Whereas now, amid the financial turmoil of early 2016...?
"I spent last week in the US," says a note from Swiss investment and bullion bank UBS's global head of precious metals strategy, Edel Tully, "and the topic of conversation was gold, gold and more gold – from current clients, clients that haven't been active since the tail end of the bull run, clients of my FX/equity/rates colleagues, and potential clients.
"In other words, everyone wanted to talk about gold. I haven't seen such interest in years."
Investment trading in gold derivatives also counts, by-passing physical demand and supply almost entirely but clearly impacting the price of actual metal day-to-day. Because if the price of futures contracts referencing gold is rising, then the current price for physical metal will surely rise too, even though those paper bets almost always settle for cash, never for metal itself.
The opposite happened in 2015. Money managers, as a group, turned "net negative" with their gold-price bets for the first time since at least 2006, when these figures from US regulator the CFTC were first gathered. 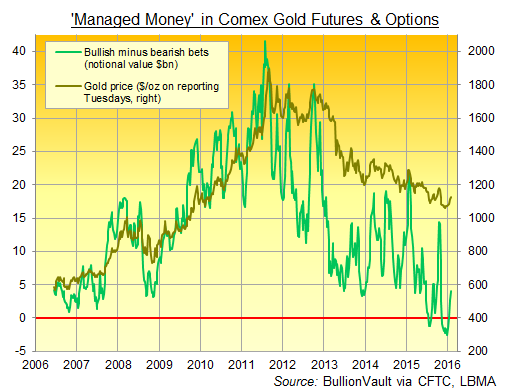 Add this to 2015's continued loss of interest in gold-backed ETFs, and – as the World Gold Council put it today – "The Western speculative investor-led price drop...spurred consumer demand for gold."
That consumer demand included all those retail bars and coins picked up at 6-year discounts by private investors and savers. Today that looks a smart move, jumping ahead of the money managers now panicking into gold after withdrawing and then fleeing since the price top of 2010-2012.
Early bird investors can, if they wish, now sell at the highest prices in over 12 months if they wish. Provided they chose to buy the right kind of gold in the right, market-ready location.
Coin and small-bar owners, in contrast, will have to shop around for the best offer from retail outlets, physically travelling to hand over their property – or mail it insured (if they can) – and accepting the below-market prices which the retail end of the industry pays.
Looking at current prices, however, doesn't say for sure which they're now headed. For that, a better indication comes from asking yourself what the players who matter are likely to do.
Gold prices aren't driven by consumers or savers buying gold because it is gold. What counts is demand from people who buy gold because it isn't anything else.
Gold isn't debt. It isn't equity, and it certainly isn't cash. Nor is it particularly useful to industry (technology demand fell 5% in 2015 to account for less than one ounce in every 13. Demand from dentists for gold fillings fell the same amount, hitting new modern-era lows). In a world glutted with debt, equities and industrial commodities, that makes gold suddenly look very useful for doing what people everywhere have always used to do – storing value when other things fail.
Worsening volatility and losses are forcing money managers to reconsider their exit from gold since it peaked with the last global financial crisis in 2010-2012. What matters most to gold’s direction from here is what happens to other asset prices.