END_OF_DOCUMENT_TOKEN_TO_BE_REPLACED

But fundamental support 'lacking' says Metals Focus...
GOLD INVESTING will boost bullion prices in 2017 according to leading analysts, with the metal perhaps touching $1475 per ounce before year's end.
Interest rates from the US Federal Reserve remain "gold friendly" by failing to keep pace with inflation says the new Gold Focus 2017 from specialists Metals Focus.
Political risks such as Brexit, the new US Trump presidency's "saber-rattling" with China, European elections and ongoing conflict in the Middle East also look set to boost gold investing demand, outweighing the global market's poor supply and demand fundamentals.
"Although it won't be a straight, and while there are headwinds for gold," said Metals Focus director Philip Newman, launching the new report in London as colleagues presented in Hong Kong, Mumbai and Toronto, "these safe-haven events could see considerably higher prices."
Absent a political or investment shock however, 2017's gold investing demand will likely see the year's average price rise just 3% from 2016 to $1285 per ounce on Metals Focus' base case, because strong supplies of metal are meeting weak demand, most notably from the key consumer markets of China and India.
Comparing the size and shape of gold imports and exports through the No.1 refining nation of Switzerland in 2016 with 2013, when the sharpest gold price drop in 3 decades met a surge in Asian buying, "This really gives you a sense of how little price support came through [last year] from the key Asian markets," pointing to both weak demand and strong supply from the region. 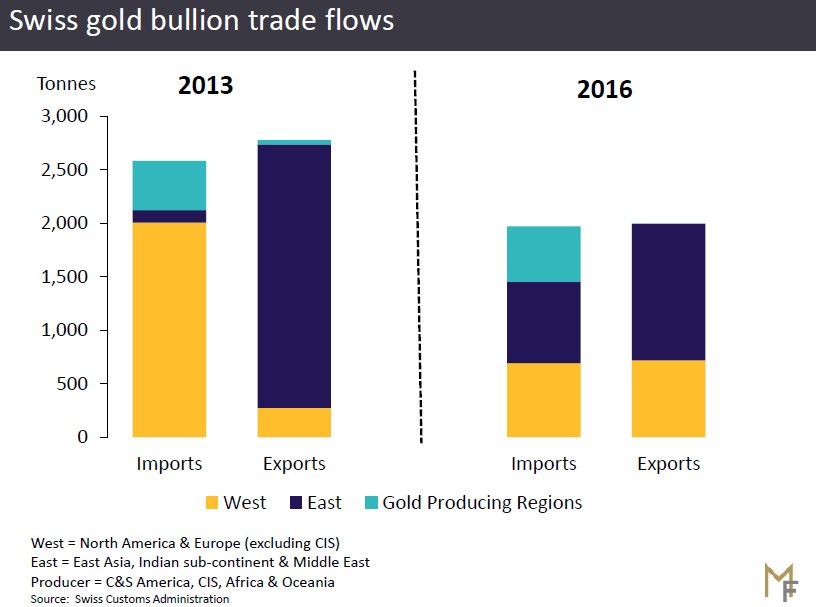 Together with a new record high in global mining output in fact, "The price lacked support from the supply-side in 2016," Newman went on.
The bear market in gold prices from 2012 to 2015 "was very much a Dollar story," he explained, meaning that mining companies outside the US continued growing production to capitalize on high sales values.
"There's also been aggressive cost-cutting," widening the profit margin on gold mining still further and again incentiving more output. 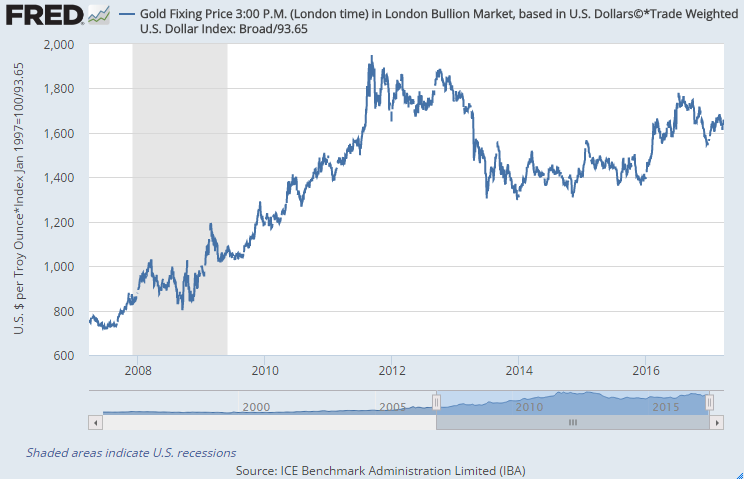 Adding to global gold supplies, China was the largest source of gold scrap in 2016, driven by what Newman called the "one-off event" of new rules on hallmarking, forcing the transformation of unsold jewelry stocks across the world's No.1 consumer nation.
On the demand side meantime, China's private gold investment rose in 2016, spurred by last January's crash in the Shanghai and Shenzen stock market and then drawing money from wealthier households, family offices and professional investors wanting protection from the weakening Chinese currency, the Yuan.
China's jewelry demand in contrast fell hard as consumers struggled with rising living costs – notably rent and healthcare – plus economic worries denting consumer spending overall.
"We also need to be mindful of a potential structural shift" in China's jewelry market, Newman added, with current fashion switching to lighter, lower purity pieces, resulting in a rise for 18-carat demand but a drop for items of 0.999 fine, cutting the country's total tonnage.
Gold demand in India – now the No.2 private consumer – was "less pretty" still, Metals Focus said in Thursday's presentation, with price action becoming "secondary" in this typically price-sensitive market behind a series of dramatic new government tax hikes and cash-spending rules.
Asian gold demand has traditionally provided price support to the gold market, Newman explained, but only new gold investing can drive prices higher, because consumers prefer stable or lower prices.
"Day-to-day, gold prices are set by investing and speculative trading," said Metals Focus' research manager Neil Meader at the London launch Thursday, also noting how prices rose in 2016 despite the weakening supply-demand balance overall.
Investors and most especially professional money managers trade off what's happening to interest rates and the macro-economic and investing picture, he said.
"They pay very little attention to the fundamentals."