END_OF_DOCUMENT_TOKEN_TO_BE_REPLACED

Gold insures your other, more typically profitable investments. Yes, really...
YEAR-to-date in 2013, writes Adrian Ash at BullionVault, the gold price in Dollars dropped 25%.
The US stock market, in contrast, rose this year by, guess what? The very same 25%.
So as a hedge against equities, if you held an equal sum of each at New Year, gold proved all-too good in 2013. Add a few US Treasury bonds to the mix, and you would have lost value this year. Which is what happened to those professional money managers failing to quit the QE Trade even as the Federal Reserve started to talk up the idea it might "taper" money printing this year.
Deflation first, inflation next. The script of quantitative easing made fixed-income bonds and gold bullion an unlikely but profitable pair. The end of QE – much discussed but as yet far from a fact – undid both assets this year, as Bullionvault's new Annual Asset Performance Comparison shows. 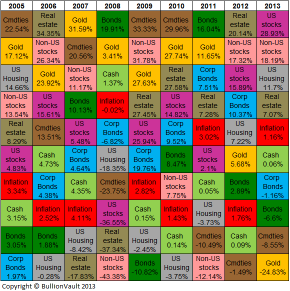 Plenty of other natural resources dropped hard in price in 2013, pulling commodities into second-last place on our comparison table. Corn has dropped 27%. Copper has lost 14%.
But gold did much worse, while equities worldwide topped the table, led by US stocks.
Together, and reviewing this relationship across 40 years of data, as our Annual Asset Performance Comparison does, this suggests that gold in 2013 really did act as insurance. Yes really. Insurance against stockmarket losses. Insurance against inflation. Insurance against a credit crunch destroying real estate prices once more.
Thing is, with stockmarkets surging in 2013, and with US real estate prices (both residential and commercial) continuing to rise, the QE Trade looked finished. So golden insurance didn't pay out. Because it wasn't needed. But that hardly means you can forget to renew your cover.
Now, because gold, like bonds, wasn't needed to reverse capital losses on stocks or real estate in 2013, it simply hasn't commanded the same price as it did in 2012, much less 2011. At least, that's how the big flows of capital see things. Which is what counts.
Yes, the price drop sure hurts. We're all too aware of that, personally, here at BullionVault. But betting the farm on precious metals, or any other single asset class, never looks wise. Least of all when the beauty contest of investing finds a new fad. No, this year wasn't post-QE in reality. But forward-looking as ever, investors moved on from bonds and gold (aka, deflation first, then inflation) regardless. Because shooting the lights out, as real money managers must, means trying to guess which asset most other investors will find most attractive. And quick.
The key for private savings, in contrast, is long-term preservation above all else. And over that long term, as our Annual Asset Performance Comparison Table shows from 1973-2013, that means buying gold and hoping it goes down in price. Seriously. Because odds are, that will mean your other investments and savings are rising.
The alternative outcome, of not owning physical bullion but watching it soar as inflation or a stockmarket slump hits your savings, doesn’t bear thinking about.