END_OF_DOCUMENT_TOKEN_TO_BE_REPLACED

That was the year that was...
2021 PROVED a year of surprises for gold, at least according to common wisdom, says Adrian Ash at BullionVault.
And the surprises haven't stopped yet.
"Inflation has been high for some time now," says a story on Forbes.
"So gold should go up. It didn't, it went down."
More urgently, the US Federal Reserve this month said it's going to stop creating new QE sooner, and also raise its key interest rate more quickly next year.
"So gold should go down," says the same Forbes article.
"[Yet] it's gone up." 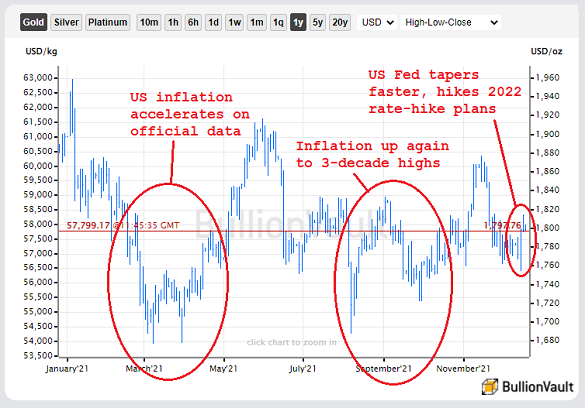 Saying that gold has "gone up" is stretching things a bit.
Just as the Fed made its latest policy announcement in mid-December, the yellow metal spiked down to 2-month lows at $1754 per ounce.
Gold then rallied sharply as the US central bank said  exactly what everyone expected it would say.
Gold prices then continued to rally, at least until this morning, touching 5-week highs at $1820 per ounce for a rebound of 3.8% from that mid-December low.
But month-on-month and year-on-year, gold continues to drag lower...
...despite the late-2021 pace of US inflation out-stripping late-2021's level of interest rates by the widest gap since, well...
...since forever. 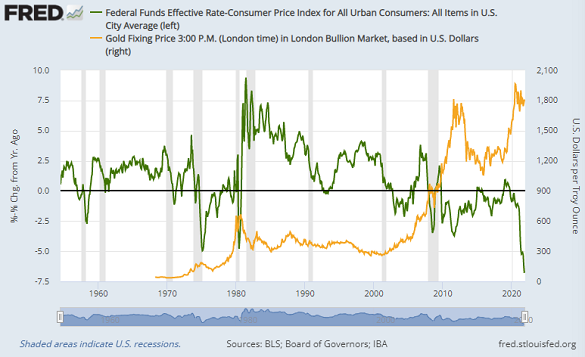 "The market view that higher inflation is good for the price of gold is based on its use as an inflation hedge," explains another head-scratcging writer, this time Clyde Russell at Reuters.
"This shibboleth largely dates back to the late 1970s and early 1980s, when gold rallied strongly amid a surge in US inflation.
"However, gold's extended rally from about 2000 onwards wasn't driven by inflation, or even by interest rates. Rather, it appeared more related to the rise of China and India as the two top consumers of the metal."
Oh really?
Oh yes. That underlying bid for gold from the world's 2 largest nations plays a big part, I believe, in the long-term outlook for precious metals.
But shorter-term here in late-2021, and as Russell at Reuters goes on, "For inflation to play a role in boosting gold, it will likely have to be far worse and sustained for an extended period.
"This may still happen, but in the meantime, gold will probably have to overcome the likelihood of higher interest rates, which increase the opportunity cost of holding the non-yielding metal."
Higher rates? Opportunity cost?
Gold pays nothing, remember. Nor does silver, or platinum or palladium.
But unlike those precious metals, which enjoy strong (and invaluable) industrial and technological uses, the yellow stuff does so little that it doesn't even rust.
So when interest rates rise...offering investors and savers a better return on cash and bonds...gold loses out.
Other natural resources face the same problem. Which is one reason why commodities will slip in 2022, according to analysts at the Fitch credit ratings agency.
They forecast that 19 of the 27 natural resources they follow will be cheaper next year than this.
For base metals and energy, Fitch sees supply improving while demand growth will ease.
More worrying for commodity bulls, "The Chinese economy is facing a number of downside risks, most importantly related to its real estate sector's financial difficulties." 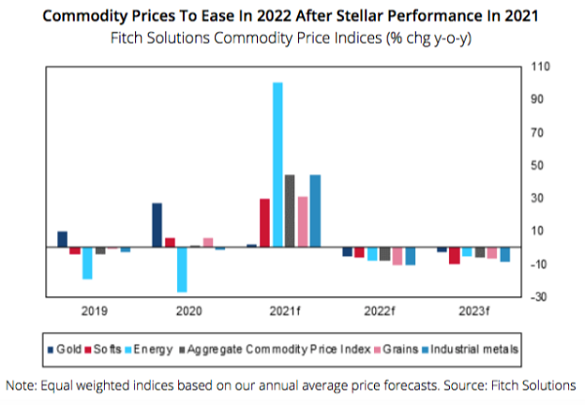 Inflation worriers might take note, too.
Because over the last 4 decades, crude oil prices and the level of US inflation have gone in the same direction year-to-year almost 80% of the time.
So a retreat in the cost of energy...as well as the other raw materials which still make modern life happen, no matter how much time you spend in 'virtual' meetings...would very likely see inflation slow down.
Bad for gold? Perhaps. But it might depend on why gold didn't surge on this year's jump to the worst inflation since the 1980s and '90s.
As for that, we have noted throughout 2021 how last year saw record investment inflows to gold, silver and the other precious metals, and we have repeated how that has proved a hard act to follow.
Private investors and money managers bought unprecedented quantities of bullion and gold-backed ETFs as the Covid Crisis began in 2020, and new inflows in 2021 have naturally lagged that surge, even as pundits and headline writers pointed at inflation and declared that "Gold is broken!"
Yes, the vast bulk of last year's allocations remain in place, showing confidence in gold's role as long-term portfolio insurance.
But this year's fresh and relentless record highs in global stock markets have also reduced the urgency of buying gold as a risk hedge, and that confidence in risk assets may well continue to curb new inflows to precious metals as 2022 begins.
If so, this may present an opportunity to more long-term minded investors, because if history is any guide, the best time to buy gold as portfolio insurance is when most other people are ignoring it.
That makes prices less elevated and offers greater upside when stock markets inevitably take a prolonged dive in due course.
Historical patterns also suggest that December might be a good time to invest in gold, ahead of what's become a traditional New Year rush. 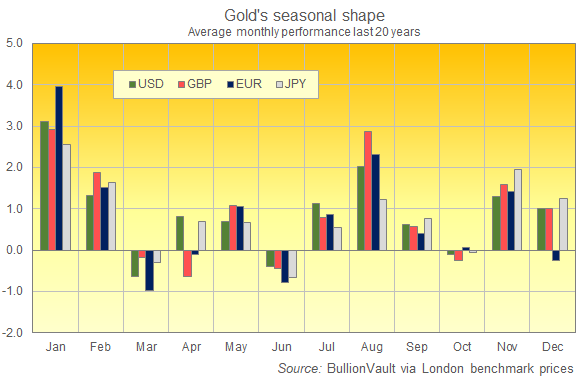 Please note that word "might". Because "might not" also applies.
We cannot know the future. We can only hope for the best while hedging against the worst.
Which is why we buy gold in the first place.