END_OF_DOCUMENT_TOKEN_TO_BE_REPLACED

Caught between inflation and rates, gold slips into Summer 2022 doldrums...
LITTLE to report from the precious metals markets right now, says Adrian Ash at BullionVault.
Little to report for the last week in fact, or even the last 3 months. 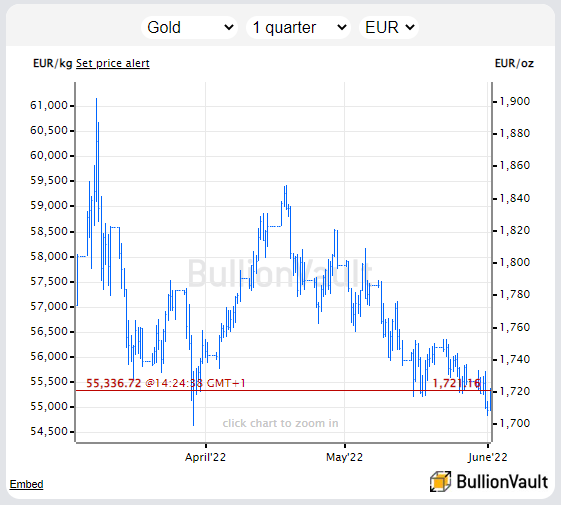 Russia rolling its tanks into Ukraine at the end of February saw gold prices spike back towards 2020's record highs in Dollar terms above $2000 per ounce.
Gold also saw gold set fresh record highs in Euros, Sterling and most other major currencies.
But here on the cusp of June, that spike has been and gone. And we might just stand on the verge of a long, boring summer for precious metals as a whole. Maybe.
Over recent decades, gold prices have often seen a rise in the New Year and spring, followed by a summer drop or lull, and then a further rise into year-end.
Some analysts link this pattern to seasonal changes in global demand for gold. And whatever seasonal gold-price patterns you might or might not see in the charts on GoldNews here, consumer gold demand does have a clear seasonal pattern.
Demand in China – now the world's No.1 gold consumer nation – peaks with Chinese New Year (Covid lockdowns permitting).
That's followed by Valentine's Day, and then the festive season of Akshaya Tritiya in southern India.
The summer brings a lack of festivals or weddings on India's Hindu calendars, before household demand in the No.2 consumer nation jumps in the run-up to Diwali.
Followed by Christmas – the peak gifting season across Europe and the Americas – that then runs into retailer stockpiling for the Chinese New Year again.
Consumer demand is not the only factor which can affect gold prices however. Quite the opposite in fact. Because rising assets tend to require inflows of investor cash, both driving and chasing prices higher.
So what's the outlook for 2022's gold investment flows here in early summer? 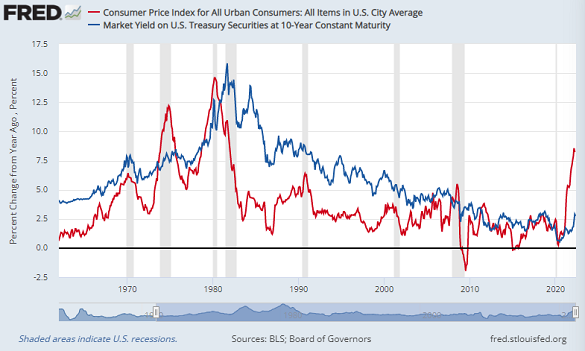 As the blue line shows, interest rates in the US bond market recently hit their highest since late 2018.
Eurozone and UK yields have meantime hit their highest since 2015.
And because gold pays no income, rising interest rates should hit like kryptonite hits Superman, sapping its strength as investors switch instead to cash or fixed-income bonds for better returns.
Against that headwind however, bullion is getting a strong boost both from inflation...
...marked for US consumers in red on the chart above, and now so high that it's making a joke of 1% interest rates from the US Fed, never mind the Bank of England or Eurozone central bank...
...and also from the uncertainty which inflation and rising interest rates are creating in the stock market.
Net-net over the last few weeks and months this has proven a wash for gold, leaving it little changed overall despite the intervening fireworks.
And over the next few weeks and months, those opposing forces might also leave gold prices stuck in the summer doldrums, becalmed between the devil and the deep blue sea.
A quick volatility warning first. Because after last month's US inflation data (on the PCE measure) last week showed exactly the little slowdown in the runaway cost of living that analysts were expecting, this Friday will bring the ever-jumpy US jobs data.
Specifically, the Non-Farm Payrolls report.
This data point – also known as NFP by hot-money traders and other market obsessives – estimates how many jobs the US economy added (or lost) over the previous month. It has long and still regularly brings a sudden game of Runaround to financial markets on the first working Friday of each month.
Whatever this week's number says for May 2022 (analysts are forecasting 325,000 net jobs growth, the weakest in 13 months) the resulting action in the financial markets could be a little more volatile than usual for gold and the other precious metals.
Because the London market will be shut for the Queen's Jubilee Bank Holidays.
London is where the physical stuff trades, rather than New York's leveraged bets loved by Comex speculators.
Those hot-money traders last week took a little shine to gold, raising their net bullish betting as a group from the lowest level since September last year.
That still left the Managed Money group's net speculative long position on Comex gold futures and options at barely half its average size of the last 3 years... 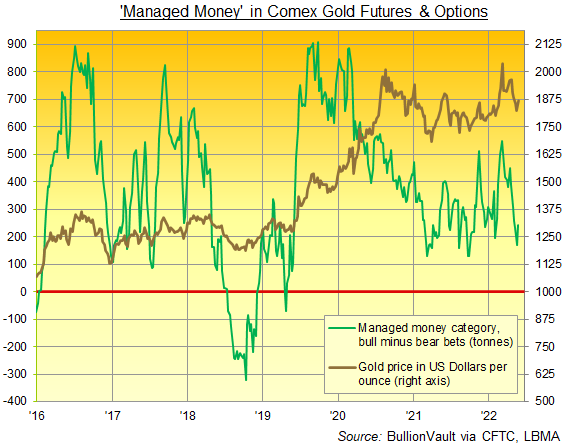 ...and with little-to-no physical activity to anchor gold prices in bullion's reality this Friday, those speculators could get to push prices around that little bit further.
Consider yourself fore-warned if not fore-armed.
A weak jobs number might spur traders to think that the US Fed won't raise interest rates as fast as promised. A strong number might confirm that the speculators have been right to see interest rates eventually winning out over strong inflation.
Unless you've both better things to do, also watch out for the US unemployment rate in Friday's data. Because April gave a reading of just 3.6%...
...the lowest since the very eve of the 2020 Covid Catastrophe...
...and pretty much the lowest since 1970.
That might suggest, as in the UK too, that the jobless rate really only has one direction to go from here. And with the Fed (like the Bank of England) pretending it might dare to try taming 8% inflation with interest rates above 1%, any uptick in unemployment might make traders think that central banks will lose what little bottle they have.
Throw in the curve-ball of crude oil prices rising as the European Union mixes a fresh batch of fudge to try banning Russian imports...
...plus Euro and UK bond yields rising amid news that China's Covid lockdowns are only worsening the global economy's supply-chain shock...
...and the noisy confusion trapping gold prices between opposing ideas and trends may very well be set to continue, albeit with sudden jumps and drops.
Good luck either way if you're actively trading into the Non-Farm Payrolls report and the summer doldrums which might just follow.