END_OF_DOCUMENT_TOKEN_TO_BE_REPLACED

Turns out that inflation is bad for gold prices...

PEOPLE buy gold when they fear inflation ahead.

But gold prices go down when interest rates outpace those fears.

And that's why we are where we are...

...and erasing all of last year's Covid rise in Euro and UK terms. 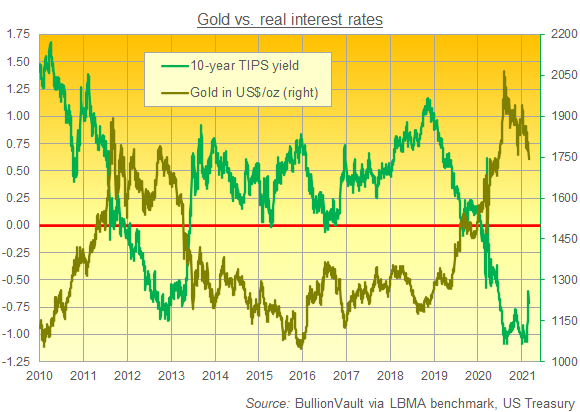 Yes, the bond market still says the US Dollar is going to lose real value in the years ahead.

Yes, owning the government debt of Germany will still cost you money even before you account for inflation.

Berlin gets to borrow at sub-zero interest rates. Add the outlook for inflation, and so too does pretty much every other major sovereign nation as well.

But while the US Dollar will still lose 7 cents of its purchasing power from now until 2031 according to the price of 10-year Treasury Inflation Protected Securities, that loss is smaller than the 11 cents forecast last August...

Inflation does matter, in short. But only once you account for what the bond market thinks will happen to interest rates. 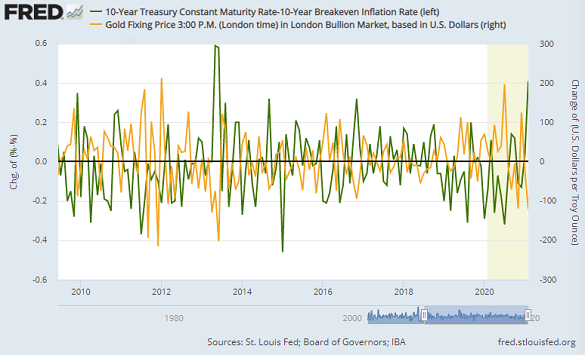 Over the last half-decade in contrast, the price of gold has now gone in the opposite direction to real US bond yields in 50 out of 60 months.

...meaning that the link between gold prices and the direction of travel in real rates has become much stronger.

Why the jump in government borrowing costs?

First it was about inflation.

A rising cost of living makes the fixed-income offered by bonds less appealing...

...especially when 'lottery tickets' from Bitcoin to copper to fine art to housing keep jumping on the flood of stimulus coming from central banks and governments since the Covid Crisis began 12 months ago.

Why miss out on that by holding government debt which pays less than zero in real terms?

So second, the sell-off in bonds quickly became self-fulfilling. Because the lower that prices went, the higher that the yield they offer to new buyers rose...

...and that steam-roller gathered pace, flattening first gold, then the stock market and even silver.

The inflation forecast implied by real interest rates has in fact fallen back since the middle of February...

...hitting 2.24% per year last month as crude oil surged above $60 per barrel, and indispensable silver joined base metals in hitting 8-year highs.

"It's a statement of confidence on the part of markets that we will have a robust and ultimately complete recovery," said US Federal Reserve boss Jerome Powell to lawmakers in his regular testimony ending Wednesday last week.

"I would be disappointed if we didn't see bond yields rise as the outlook improves," says fellow policy-maker Thomas Barkin in the Wall Street Journal today.

Even if they believed this, it means "Bonds are not the place to be these days," as legendary investor Warren Buffett puts it in his latest letter to shareholders of Berkshire Hathaway.

Because again, who wants fixed income when the income is still so low by historical standards? 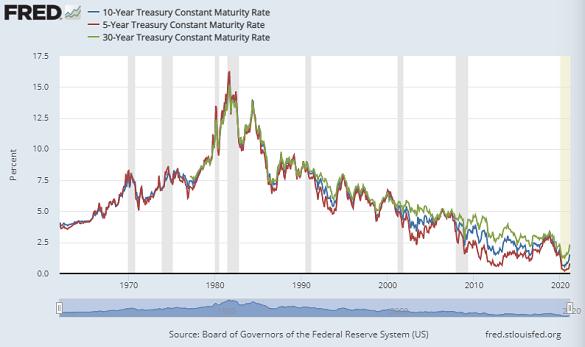 "Can you believe," asks the Sage of Omaha...

...no doubt sipping a Cherry Coke and ordering a nice steak at Gorat's...

..."that the income recently available from a 10-year US Treasury bond had fallen 94% from the yield available in September 1981?"

Never mind that inflation in the cost of living was then running near double digits. Never mind that it hasn't topped 2% on the US Fed's preferred measure for a decade and more, not since the global financial crisis.

The trend in long-term borrowing costs has been relentlessly lower since the early '80s.

"We may [now] have just seen the end of that 40-year bull market," says a headline at the Sydney Morning Herald.

It would be a great relief to many forecasters and analysts if so.

Fast forward to the current spike in government borrowing costs, and rising interest rates aren't just a relief for soothsayers and a problem for gold.

Your pension pot will most likely have taken a dive too. Because rising yields mean lower bond prices, and depending on who runs your money for you, your retirement savings could be stuffed full of 'safe' government debt.

Uglier still, it's a real problem for all those government borrowing and stimulus spending plans. They in turn might even be driving the surge in borrowing costs. Because while the lesser-spotted bond vigilantes of 1980s' legend might still be just that – a fiction – the long-suffering bond investor might just be sick to the gut with having to keep eating more and more debt at zero and sub-zero real yields. Most especially after other assets (gold and silver but especially tech stocks, crypto and other those all other lottery tickets) gave more cautious savers a bad case of FOMO.

New US President Joe Biden, for instance. He's about to get approval for his $1.9 trillion Covid relief and recovery bill.

Yet consensus now says the Covid recovery is already here, even before the next round of stimmy checks arrive.

Gold is simply pricing it in, reversing last year's big gains as the financial markets race ahead of themselves yet again.

Any disappointment with the path from here...and let's face it, the stock markets' recent highs demand a Herculean surge in GDP...and you might expect a reversal.

Even without that about-turn, the bond market still enjoys many friends and supporters.

Maybe they've got skin in the game.

"Markets Are Wrong" says a headline on Bloomberg. "$2 Trillion of Pension Funds Skip Bond Rout" by refusing to sell.

"There is a material risk for the bond market of an inflation head fake," says Dan Ivascyn, chief investment officer at $2.2 trillion bond fund giant Pimco.

"We still see powerful disinflationary trends. After an initial recovery [from the pandemic] there is likely a world of excess capacity."

Ranged against such caution, the bond bears are getting louder.

"Expect US inflation to reach 3% in May if the oil price remains at the present level all else equal," says one. "The risk is clearly on the upside."

But you could have seen that market view coming back in January. All you need do is read Gold News.

"We think the market, the economists and investors will just look at the latest figures and freak out.

"People don't seem to understand the base effects of these year-on-year changes...[but] you can look at what prices were last year, and you can see what's going to happen [to annual CPI inflation] in the next few months."

...forecasting that US consumer-price inflation could read as high as 3% come March...

...solely because the CPI index has recovered from last March's steep and dramatic Covid Crash...

...causing the sell-off in government debt to become a panic.

None of them pays any interest. Nor at these current all-time record highs does the stock market, or high-risk junk bond debt, or commercial real estate with no tenants.

Bond yields and interest rates have been falling since the early 1980s. Calling the end means calling the end for pretty much everything else as well. Don't expect central bankers to roll over and raise overnight interest rates just because the markets say they should.

Not only do they find the rise in yields unwelcome. Australia's Reserve Bank is already fighting it. The Eurozone is already calling it "unwarranted" too.

Precious metal owners might hope they win. Investors with any spread of assets might wish so too. And heaven forbid they lose and deflation takes hold.