END_OF_DOCUMENT_TOKEN_TO_BE_REPLACED

Buy gold (but not coins) to fight inflation's dragon...
ST.GEORGE stabbing the dragon famously adorns the British gold Sovereign coin, writes Adrian Ash at BullionVault.
Benedetto Pistrucci's beautiful engraving first appeared on the Sovereign in 1817, back when gold was money. Gold then backed the all-conquering British Pound by being exchanged for it whenever you asked at your bank.
So this St.George's Day, and with chatter about the fire-breathing beast of inflation now dominating the 2021 financial outlook...
...fuelled in good part by the British state's historic response to the Covid Crisis, alongside record stimulus pretty much everywhere else (not least the USA)...
...here's a quick recap of how the modern UK state's use of gold as the monetary standard ties in with the rising and sometimes falling cost of living. 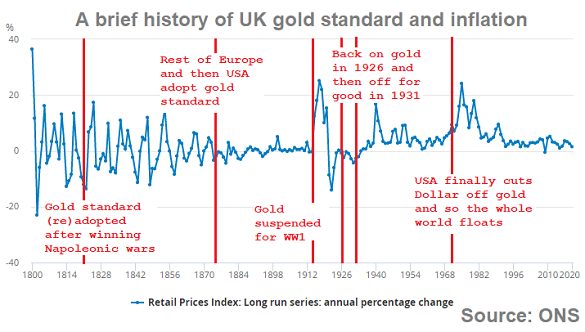 As luck would have it, the Office for National Statistics updated its long-run annual data on UK retail-price inflation for 2020  just this week.
See how it converged around 0% in the half-century before World War 1, only to blow up in the trenches before cratering and then exploding again with WW2 and then the 1970s' inflation shock, but now converging once more – albeit this time around 3% per year rather than zero.
According to the ONS – or rather, according to this no longer official RPI benchmark for the cost of living – retail prices rose 1.5% across 2020.
That level of inflation came towards the bottom-end of the last 3 decades' range. But despite the Covid Crash in commodity costs (not least fuel as commuting and travel shutdown but oil production did not) it still came above the 2015 low of 1.0% and markedly above the 2009 dip to minus 0.5% amid the global financial crisis.
2009's sub-zero reading was the first time that the cost of living fell for UK residents since 1933, itself a year of financial crisis.
Britain had, by then, already been off gold since September 1931, finally admitting defeat for what had been the all-conquering imperial Pound.
London simply couldn't square the post-World War 1 demands for welfare and social spending with the cold, unyielding demands of creditors wanting to swap their paper banknotes for a lump of metal.
Prior to that, annual deflation in the cost of living had been a common feature for British residents. Prices fell almost exactly half the time, in fact, dropping in 55 of the 111 years between our formally adopting a gold standard in 1821 and then finally abandoning it amid the interwar's Great Depression.
Here in 2021, and since that brief reappearance of deflation 12 years ago, the UK government – together with its notionally independent central bank, the Bank of England – keeps doing all it can to avoid a repeat by borrowing, spending and printing like the ink is about to run out.
The UK price of gold in Pounds per ounce has meantime doubled since 2009, holding around £1290 this St.George's Day.
That's pretty much 300 times its price when the Pound was last pegged to gold, some 9 decades ago this summer, back when the gold Sovereign really was money, rather than an over-priced bullion coin aimed at savers who, thanks to its wide gap between buying and selling prices, will struggle to ever need the capital-gains-free status its promoters love to trumpet.
Also since 2009 central government has borrowed £1.3 trillion – more than 62% of today's total debt outstanding according to this morning's new data – and almost a third of it in the 12 months to March 2021. That of course comes thanks to fighting the dragon of Covid by shutting the economy (if not the UK's borders) and then unleashing record income support and business relief in the teeth of plunging tax receipts.
Maybe this surge in public debt and deficit spending will help inflation break out of its 21st Century cage. In which case, buying a little gold might help UK savers fight off if not defeat that dragon once more.
Or maybe gold-backed money never was the cause of the late-Victorian price moderation anyway, and we are in fact well into a new flatline for the cost of living long term today.
This time, however, inflation isn't settling at zero, and interest rates on the Pound Sterling sit fully 3 percentage points below the underlying pace of price rises, rather than 4 points above as was the case when your pounds could be exchanged for gold at your bank.