END_OF_DOCUMENT_TOKEN_TO_BE_REPLACED

'Sink of the world' for 2,000 years, India faces an outright attack on its gold demand...
In CONTRAST to China, the Indian government's attacks on gold investing are well known and increasingly well-practised, writes Adrian Ash at BullionVault in the second part of this story (read the first here).
New Delhi's latest action is even having an effect, short term at last, amid the collapse in cash transactions following the shock demonetisation of 500 and 1000 Rupee notes last month.
How did the world's second biggest private gold consumer get here? To recap...
With next-to-no domestic mine output, and after two millenia or more as the "sink of the world" for precious metals, India today holds perhaps 50% of its $2 trillion of private household wealth in physical gold. That has required an awful lot of gold imports over the years, requiring in turn an awful lot of cash outflows.
That's why Indian citizens were banned from investing and trading in gold amid the balance of payments and currency crisis building after 1947's independence from Britain. Almost 30 years of smuggling followed, with mafia networks and everyday law-breaking growing to match, as people continued buying gold to sidestep the Rupee's continued and steady devaluation. 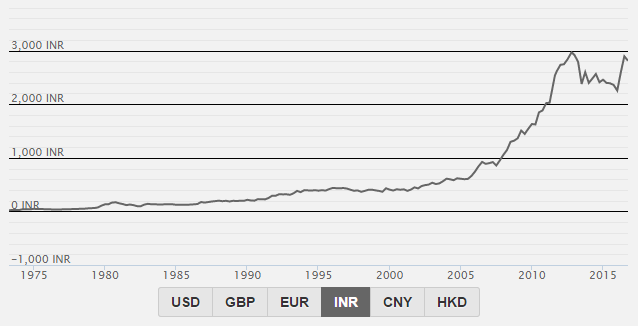