END_OF_DOCUMENT_TOKEN_TO_BE_REPLACED

Investors fearful for their currencies are turning to Gold Bullion. But why...?

REMEMBER how everyone thought Greece would have left the Euro by now? asks Ben Traynor at BullionVault.

And remember when Spain's government was only days away from requesting a formal bailout?

Never underestimate the power of Europe's politicians to press the slow-mo button on the single currency car crash.

But how long can all this go on? Things are getting worse, not better. As FT Alphaville reports, Greece is facing another potential default next week, while Spain's auction of 5-Year bonds this week was described by one trader as "awful", with a wide range of bids suggesting little market consensus on how the bonds should be priced. Reuters reports that this was the first time in 18 months that Spain has tried to sell longer-term bonds.

Take a look at the following chart from the Spanish Treasury, showing the maturity profile of Spanish government debt. See the big spike for 2013? 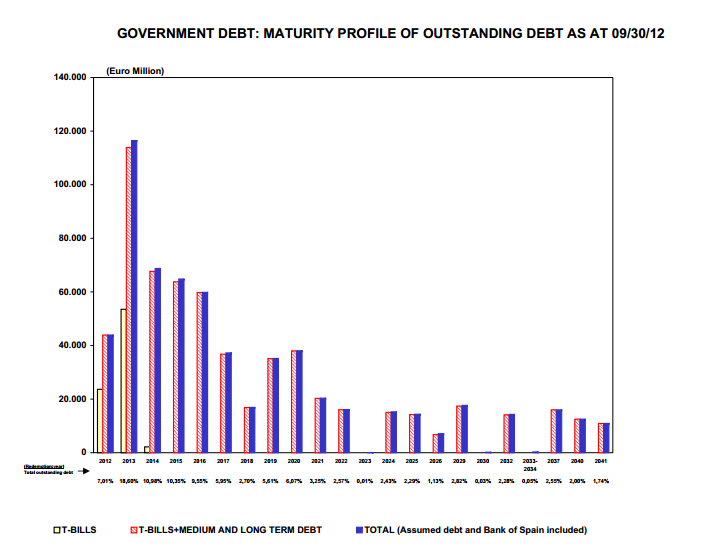 Spain's debt is piling up at the short end. In a video recorded earlier this year, BullionVault founder Paul Tustain likens this phenomenon to a train wreck in the bond markets, with government debt piling up against the buffers until that government is either forced to default, or a devaluation of the debt is orchestrated with central bank assistance – for example with interest rates held below inflation for a sustained period.

Of course, devaluing debt means devaluing currency itself. This is where Gold Bullion comes in. Many investors worry that their currency will fail to hold its value. Many of those have turned to gold. At the time of writing, the Gold Price in Euros is within 1.5% of its all-time high set last month. For gold priced in Dollars, the gap is closer to 10%, from a high hit over a year ago.

Why the discrepancy? Because the crisis is more intense in Europe, that's why. The value of the Euro is under far greater scrutiny.

Many investors believe the Dollar will one day face a similar test. Some of those have added Gold Bullion to their portfolio. To find out why, set aside twenty minutes or so and watch Paul's video from the beginning.